Skip to content
Advertisement
Trusted By Millions
Independent, Expert Android News You Can Trust, Since 2010
Publishing More Android Than Anyone Else
0
Today
174
This Week
341
This Month
3627
This Year
113677
All Time
Advertisement Five months after launch, the Microsoft Surface Duo is finally set to cross the boundaries of the US. The dual-screen folding smartphone will be available in Europe and Canada next week. The device will go on sale in Canada, the UK, Germany, and France from February 18th. It’s the first time the Surface Duo has been commercially available outside the US.

In the UK, the Surface Duo will be available from the Microsoft Store as well as third-party retailer Currys PC World. Microsoft has priced its first Android smartphone at £1,349 in the country. Buyers in Germany, meanwhile, will have to shell out 1,549 euros to own this unique folding smartphone.

The pricing details of the phone in France and Canada are not known yet. However, its French price should be just about the same as the German price. We’ll have to wait for confirmation on the Canadian price of the Surface Duo though.

Microsoft Surface Duo gets another price cut in the US

After several months of waiting, Microsoft finally launched the dual-screen Surface Duo in September last year. The device arrived in the US market on September 10 with a price tag of $1,399. However, by the end of October, it was already selling for $1,199, a discount of $200.

Now as Microsoft prepares to bring the Surface Duo to international markets, it is getting another major discount in the US. The base variant of the phone (128GB) is now selling for just $999 in the country. Unfortunately, though, Microsoft isn’t offering the same generosity to the potential Surface Duo buyers outside the US. So while buyers in the US are getting a discount of $400 on the original price of the phone, people looking to buy it elsewhere will have to shell out the full price.

At $999, the Microsoft Surface Duo looks like a decent buy in the US. However, the device still has quite a few shortcomings that may ruin your experience. It runs on the two-generation-old Snapdragon 855 chipset and lacks some of the modern features such as NFC, wireless charging, and 5G. Moreover, there’s also only one camera on this phone, that too without OIS (Optical Image Stabilization).

The modified version of Android isn’t quite up to the mark either. Microsoft has optimized its own apps to leverage the two screens but many third-party apps still don’t take advantage of this unique hardware that has the potential to be a gamechanger.

All these shortcomings mean the Surface Duo isn’t quite the phone to buy right now if you’re outside the US unless you specifically want it. Considering how much lower the US price is, we suggest you wait for a promo deal to grab it at a discount. 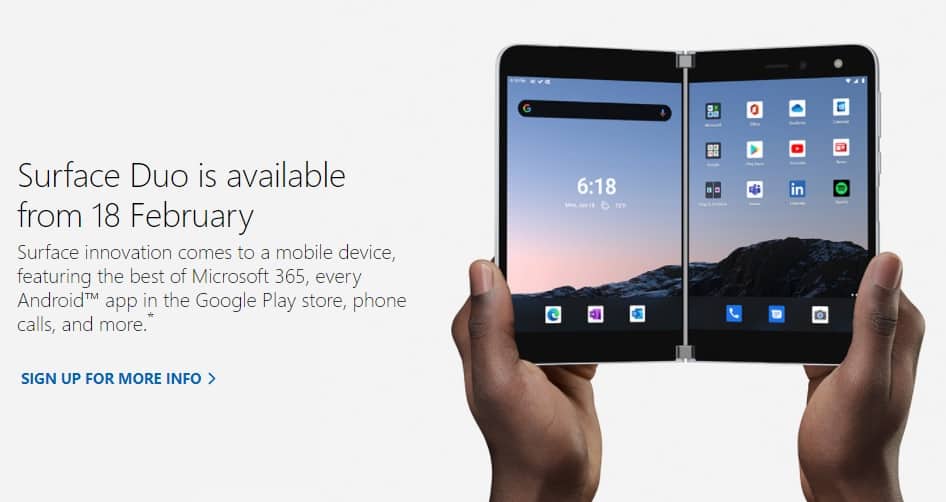