New reports suggest that we may have a new Sony smartphone right around the corner. Notably, a mysterious Sony device with model number A003SO (allegedly Sony Xperia 10 III) has appeared on the Geekbench listing.

The design of the device looks strikingly similar to Sony Xperia 10 II. As per the design leaks, the device will come with straight edges, pronounced bezels, a 21:9 cinematic aspect ratio, and a rounded frame. Additionally, there will be the familiar triple-camera module at the back.

The upcoming Xperia 10 III is also expected to pack the Snapdragon 690 SoC. Interestingly, this adds fuel to rumors that the new Sony device spotted on the Geekbench listing is indeed Sony Xperia 10 III.

According to the listing, the leaked device is powered by a Snapdragon chipset codenamed “Lito”. While it is a bit difficult to identify the chipset with this codename, there is a possibility that it could be a Snapdragon 600-series chipset.

Moreover, the mysterious Sony device packs 6GB of RAM. It will run the Android 11 operating system out of the box, which is a nice move by Sony.

Further, the listing reveals that the processor has a base frequency of 1.80GHz. Early leaks have revealed that the upcoming Sony Xperia 10 III will measure 154.4 x 68.4 x 8.3 mm, i.e. 9.1mm without the camera module.

Besides, the display will be 6.1-inches and the front camera is speculated to be an 8MP shooter. On the back, Xperia 10 III would come with a 12MP wide-angle lens, an 8MP telephoto sensor, and an 8MP ultra-wide lens. Sony would likely retain the 3.5mm audio jack and stereo speakers on the phone.

The side-mounted power button will also act as the fingerprint scanner. Also, it is not known whether the device spotted on the Geekbench listing with model number A003SO is Sony Xperia 10 III.

There is no information on when Sony plans to debut this new device. Playing the guessing game, Sony may announce the Sony Xperia 10 III along with the Xperia 1 III. Since there is no official confirmation, we would advise our readers to take the information with a pinch of salt. 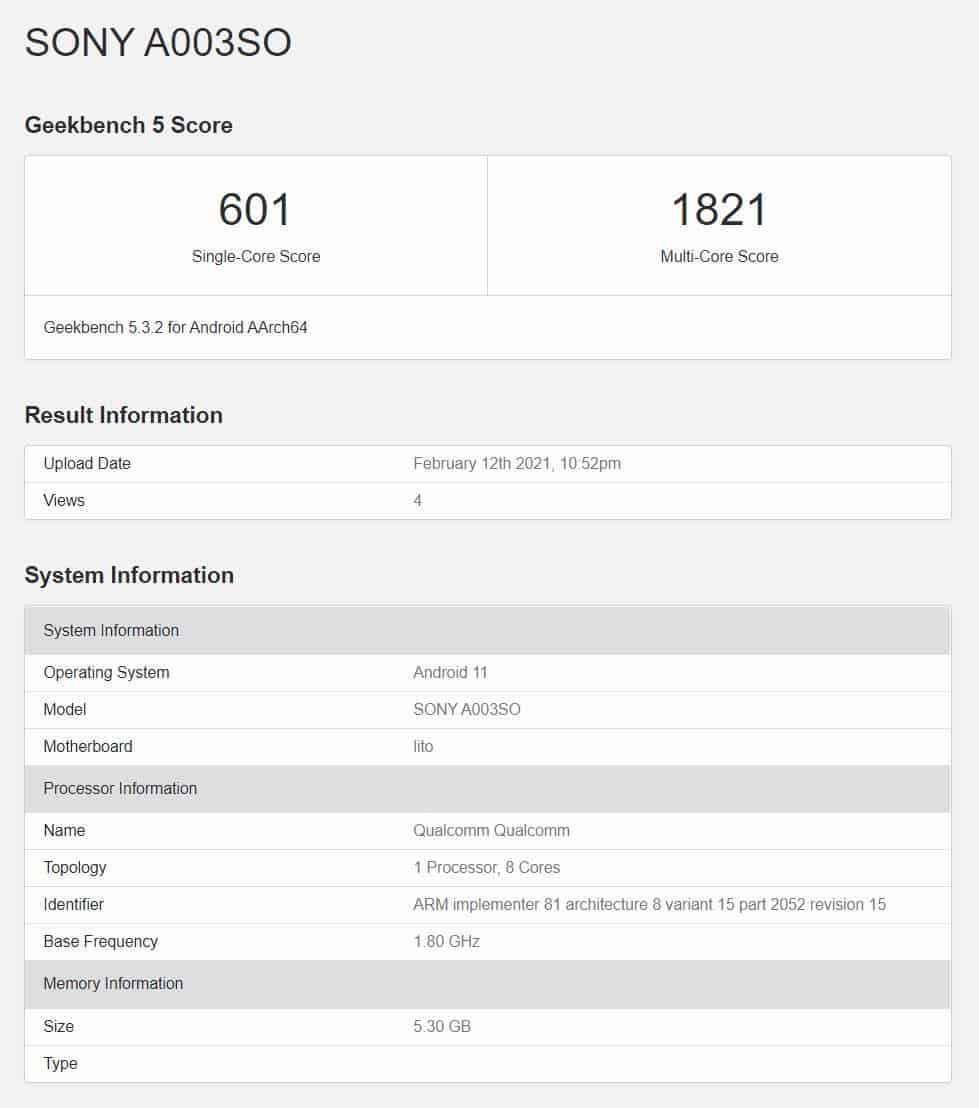