An unannounced Motorola smartphone codenamed “Ibiza” has appeared on Geekbench. The device carries the model number XT2137-2 and is powered by an octa-core Qualcomm ARMv8 processor operating at a base frequency of 1.8GHz. It scored 2,466 points in single-core tests and 6,223 points in multi-core tests on Geekbench 4. The handset packs an Adreno 619 GPU, 6GB RAM, and is running on Android 11.

The Motorola Ibiza had last month picked up the Wi-Fi Alliance certification which reiterated that the device will boot Android 11 from the first day. It also supports dual-band 2.4GHz and 5Ghz Wi-Fi.

Earlier this year, German publication Technik News had claimed that Ibiza is one of the three phones Motorola is working on for a Q1 2021 launch. Nio and Capri being the other two. While we have already heard quite a lot about the Nio phone, which is seemingly a flagship-grade offering from the Lenovo-owned company, the Motorola Capri and Capri Plus also recently picked up a couple of important certifications. These two appear to be mid-range handsets.

The Motorola Ibiza, on the other hand, is seemingly a budget offering from the company. The same source had also revealed the key specs of the upcoming Motorola phone. It reportedly gets the Snapdragon 480 SoC, which is Qualcomm’s cheapest 5G mobile platform as of now. This chipset integrates an Adreno 619 GPU, which aligns with the information revealed by this Geekbench entry.

The report also suggested 4GB of RAM and 128GB of storage capacity. Perhaps the Motorola Ibiza will come in multiple memory configurations. The device reportedly sports an HD+ display with a centered waterdrop notch and a 90Hz refresh rate.

As mentioned earlier, Motorola is planning to introduce this affordable 5G-ready smartphone in the first quarter of this year. The Vivo Y31s and the Oppo A93 5G are the only other phones running the Snapdragon 480 5G SoC as of now.

Nokia also has a phone in development with this chipset. Codenamed “Quicksilver,” the device may arrive in the market pretty soon. The Motorola Ibiza will be directly up against the Nokia Quicksilver and the likes in the entry-level 5G smartphone market. It now remains to be seen how these phones are priced at launch. 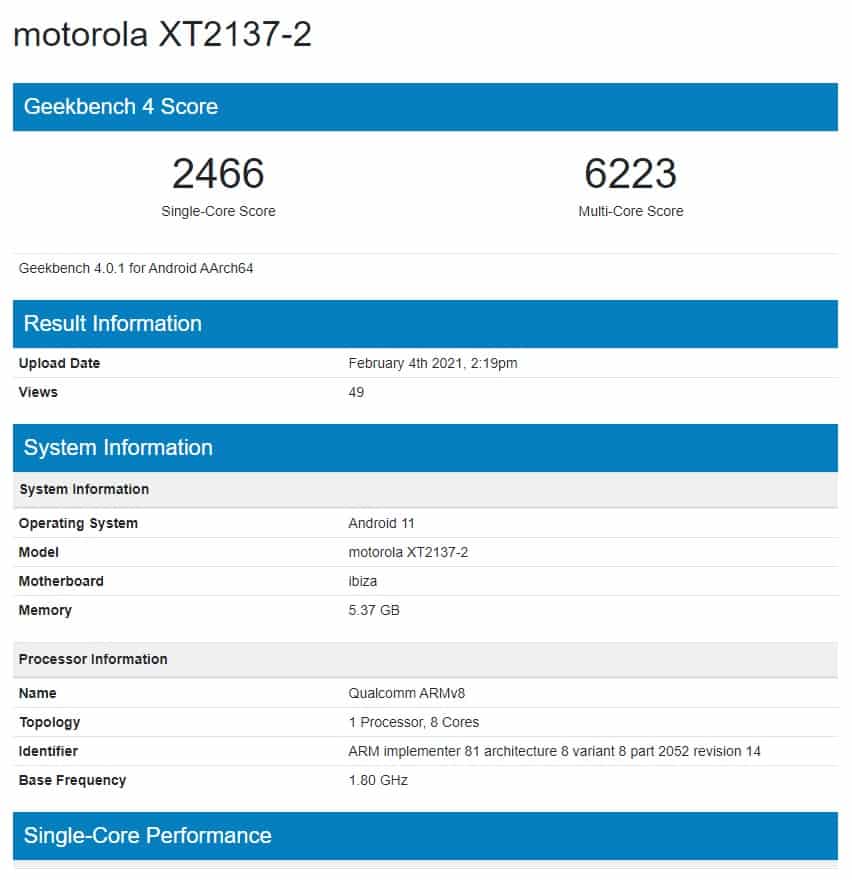