More news on the phasing out of Hangouts has been reported by Android Police. The Google Hangouts Call Phones feature lets you place phone calls in Hangouts via Google Voice. Well for anyone who has a remaining balance you have a refund coming your way.

The Call Phones feature is generally free. Unless users want to make certain types of phone calls. But with the death of Hangouts creeping along Google is shutting down the feature. Google is sending out emails in regards to refunds for users with remaining balances.

The email will be automatically sent to you, but there is a manual process as well. Now for users who are patient just keep an eye out for an email from Google in regards to your refund. The main thing Google wants to know is if it is okay to refund the original payment method.

Now if you are less patient there are some steps to start the manual refund process. Google has provided steps to do this. The steps don’t seem too hard. The detailed steps are below: 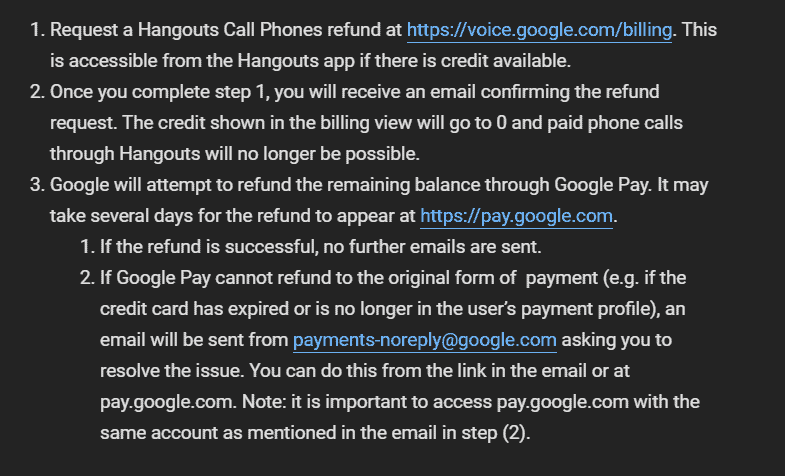 Even if you go the manual route Google says the refund may still take up to 10 days to go back into your account. Hangouts have been getting slowly phased out for a few years. But now, the process is speeding up. Hangouts is being transitioned over to Google Chat, and over the past few days, it’s been picking up speed.

Users who have been stubborn and haven’t moved over to Chat themselves their non-group conversations may have. Recently, Google started rolling out the Google Chat “Preview” for users coming from Hangouts. This is an attempt to make the transition easier.

However, the Preview lacks group chats. But, it does have video calls and contact searches. The Preview is still rolling out to users slowly. Some users are reporting are that new conversations are popping up. As Google continues to transition users over it seems things will continue to improve.

Google’s messaging strategy has been a mess, but the company has been busy cleaning it up. First, there was the saga of Google Allo which was positioned as an iMessage competitor. Allo had a lot of potentials, but Google threw it out pretty quickly.

Hangouts was a favorite messaging platform for many users for a long time. Now that Google is migrating everyone over to Chat, it seems like they have a better solution.