Recently, the internet has been abuzz over the manipulation of the stock market by a group of amateur investors. It has certainly been an interesting story to follow, with implications for Wall Street in particular. But did you know that millions of amateur investors have been trading stocks for years? With the best stock trading apps in Canada, or anywhere else in the world, you can take advantage too.

Yes, the subreddit WallStreetBets proved that you don’t have to be a multibillion dollar hedge fund to have a huge impact on the stock market. However, individuals have been effectively investing relatively small amounts by working within the already existing system.

If the potential for earning passive income through stock trading appeals to you, there are plenty of apps for Android to start trading wherever you are in the world. Not all of them are created equal, however, so let’s look at the best trading apps for Android from Canada, the US, and the UK.

The Best Trading Apps In Canada

When it comes to robo traders, Qtrade is one of the best, full stop. Since it is specifically a Canadian platform, it will have to settle for the best trading platform in Canada. It is so impressive because it is an all-rounder. Depositing money and making trades is easy, even for the technophobes among us. Beyond the basics, Qtrade provides a whole host of tools to gain insight into the stock market so that you are best prepared to start making money.

Importantly, customer reviews praise their customer support, which is crucial when trading through an app. You need to be able to trust that they will have your back when things go wrong, because there is real money at stake.

Unfortunately, Qtrade cannot yet promise to claim the best trading app in Canada, with recent reviews calling out bugs and glitches. This seems to be a theme with trading apps, however, and Qtrade’s web platform still keeps them at the top of our list.

After talking up Qtrade Investor, you may well be wondering what an app like Questrade has to offer as an alternative. The answer is their low fees. While trading using Qtrade is inexpensive, Questrade’s fees are almost always lower. They charge no opening or closing fees, transfers are free, there are no annual RRSP or TFSA account fees, and ETF purchases are carried out commission-free.

Their app has a similar rating to Qtrade’s Android app, and recent comments may give you reason to stick to the web platform.

WealthSimple is another all-round Canadian trading platform that not only does the basics but has features to help you make the best decisions in real time. It is not quite on the level of Qtrade and Questrade. However, it deserves a spot on this list of the best trading apps for Android for its score of 4 stars on the Play Store.

That said, while the aggregate is good, written reviews speak of similar problems to those of the alternative apps.

Formerly known as Mylo, Moka is a different type of Canadian trading app. Rather than being an all-round trading platform, it works by putting your “spare change” into ETFs. In other words, it rounds up every amount you spend and invests the difference for you. It is not for people who want to seriously get involved in trading, but is a good system for anyone who wants to earn truly passive income.

The Best Trading Apps In USA

Furthermore, Webull is a trustworthy trading platform that makes trading quick and easy for beginners, while providing all the features seasoned traders need. 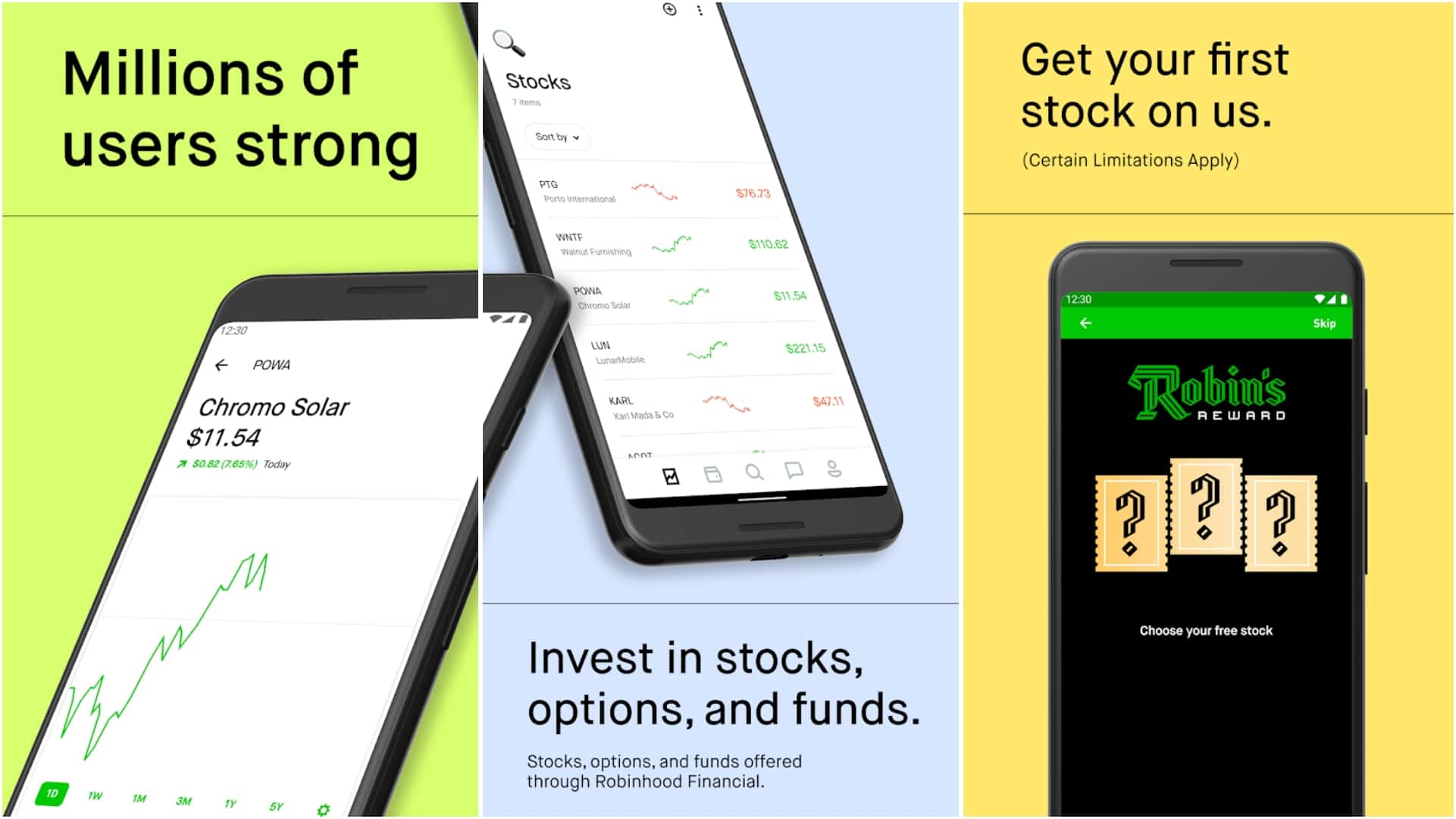 This one needs to come with a caveat. Recently, Robinhood’s reputation took quite a hit. When amateur traders started using it to trade GameStop, causing chaos in the stock market, Robinhood imposed limits on traders and halted trading altogether on some stocks. An app that was supposed to make trading accessible to anyone was suddenly doing the opposite.

All that being said, Robinhood is a good platform, and their app isn’t bad either. That is, if you can get past the 1.3 star rating it now boasts on the Play Store.

Another one of the big US platforms used by tens of thousands of investors, E*Trade is considered a trustworthy and reliable platform. When it comes to their Android app, the responses are not all good. Many users have had problems with the most recent update, having had a seamless experience in the past.

With a 2 star rating, the app is certainly not gunning for the best app of the year. But in terms of trading apps, it is one of the better ones available on the Android store.

The Best Trading Apps In UK 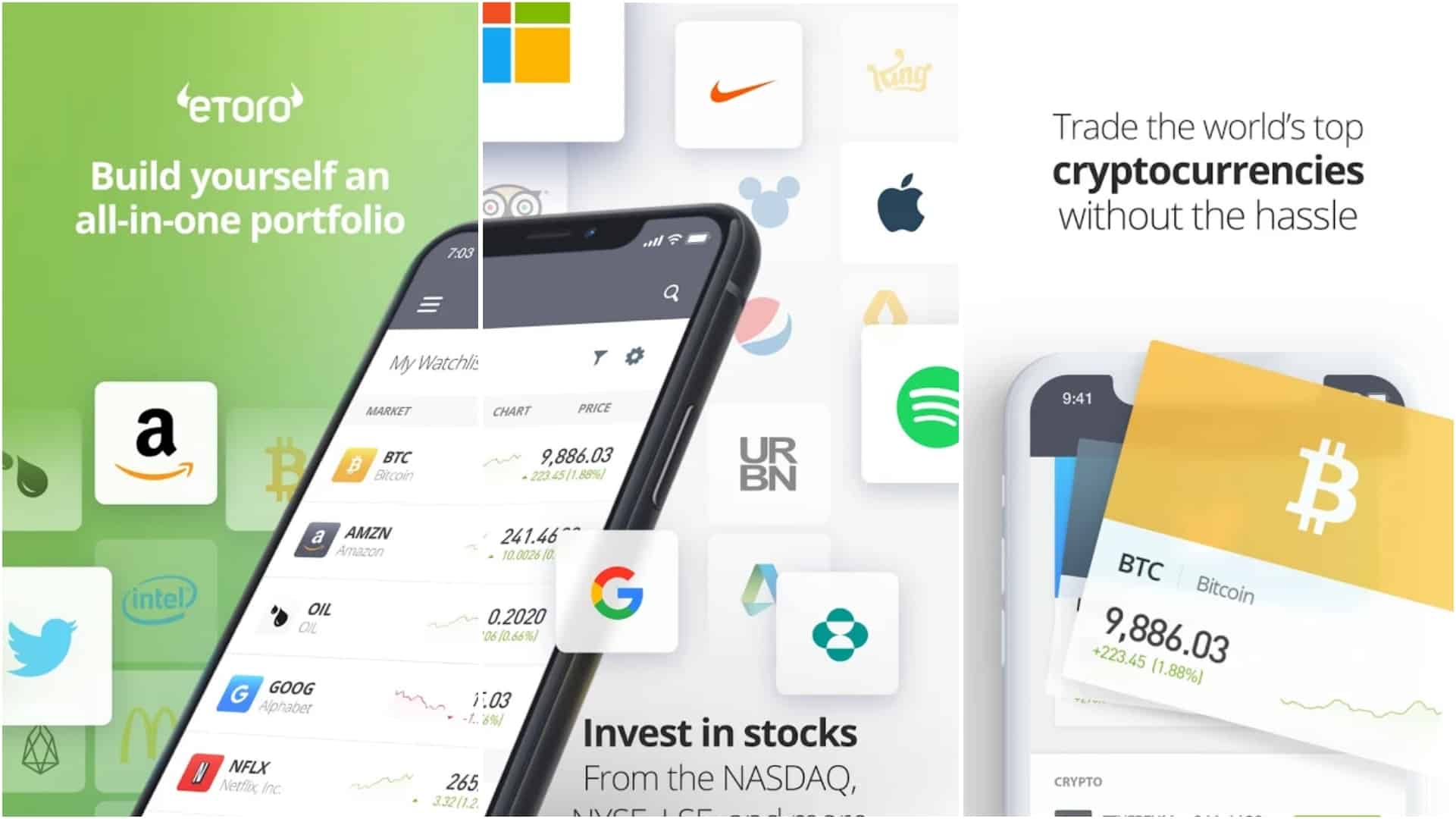 eToro is one of if not the best trading apps in the UK for a number of reasons. The reason it will appeal to most beginner traders is that it works on a 100% commission-free basis. This is unlike just about any other trading platform. It manages to do so by taking a 0.5% currency conversion fee on deposits. This fee is still remarkably low, and cancelled out by the fact that eToro waives 0.5% stamp duty taxes.

There are complaints about the app, as is the case with every other trading app. Based on the performance of the web platform and eToro’s trustworthiness, it is still a recommended app for people living in the UK.

A company founded in the UK, Trading 212 provides one of the best trading apps for Android. What makes Trading 212 a perfect option for many beginner traders is its demo account. You can open a demo account as soon as you download the app, and spend some time getting used to trading before actually depositing any funds. This way, you have the chance to learn in a low-stakes environment, rather than risking real money when you still don’t quite know what you’re doing.

Although the company boasts a 4.5 star Google Play rating on its site, that turned out to be too good to be true. There are similar complaints about it as with eToro, but there are still plenty of satisfied users. It could be that trading apps bear the brunt of traders’ frustrations when things go wrong.

IG gives you access to over seventeen thousand markets, making it one of the most adaptable apps on this list. You can trade stocks on this app using CFDs, and the company uses a variable commission model.

When it comes to the Android app, IG has the highest score despite some customers complaining about similar issues. Is the app good enough to justify choosing IG over eToro? Probably not. You’re not going to have that much better of an experience – not enough so that it’s worth paying the commission.

The above are the best trading apps for Android in Canada, the US, and the UK. While they all have issues mentioned in their Play Store ratings, the reality is that reviews are generally written by the most disgruntled users. However, you may want to rely primarily on the desktop app for trading to ensure you do not get burned by mobile app malfunctions.

Trading can be done by anyone. With so many apps available, you can start earning money in no time.