Verizon’s Visible now supports 5G on Android. The 5G goodness is starting with the Samsung Galaxy S20, so If you have one you can get 5G speeds now. The Verizon MVNO was once iPhone-exclusive, but now select Android devices can now connect to Verizon’s 5G towers.

You may be wondering what an MVNO is. A mobile virtual network operator (MVNO) is a wireless service provider that does not have its own wireless network structure. Instead, an MVNO enters an agreement with an existing mobile network operator, like Verizon, to obtain access to their network.

With that explanation out of the way, 9to5Google says that current customers are receiving an email explaining some Android phones now can get 5G on visible. Originally the 5G was only offered on the iPhone 12. Unfortunately, the only officially supported Android device is the Samsung Galaxy S20.

Originally Visible said that its 5G service was included within their existing $40 plan. This inclusion was for any phone regardless if it was an iPhone or Android. Verizon’s 5G Ultra Wideband network can get speeds of 900Mbps according to Verizon.

Visible now supports 5G but there is a catch

However, Visible will only be able to get up to a maximum of 200Mbps. But in all honesty that isn’t bad, and it is leagues better than the original max speed of 5Mbps. The Galaxy S20 needs a software update to take advantage of these new speeds. In order to get this update simply open the Settings app, select “Software update”, then “Download and install”.

After downloading and installing the new update your Galaxy S20 will be able to take advantage of faster 5G speeds. However, if you do not have 5G available in your area you will still be stuck with the slower 4G LTE speeds. Verizon’s Ultra Wideband 5G network isn’t as widespread as its Nationwide 5G.

Considering that the Galaxy S20 needs a software update to gain access to Verizon’s 5G network there is no confirmation other devices will be able to have 5G. Devices like the Pixel 5 and OnePlus 8 may or may not be able to access Verizon’s 5G while on Visible’s service.

The Galaxy S21 is on the list of unconfirmed devices, unfortunately. Only time will tell if other devices gain access to Verizon’s 5G through Visible.

Visible according to Verizon exists to attract customers that are different from what Verizon attracts. Verizon attracts customers who like a premium full-service experience. Visible is more for the savvy customer who does everything online and prefers it that way. 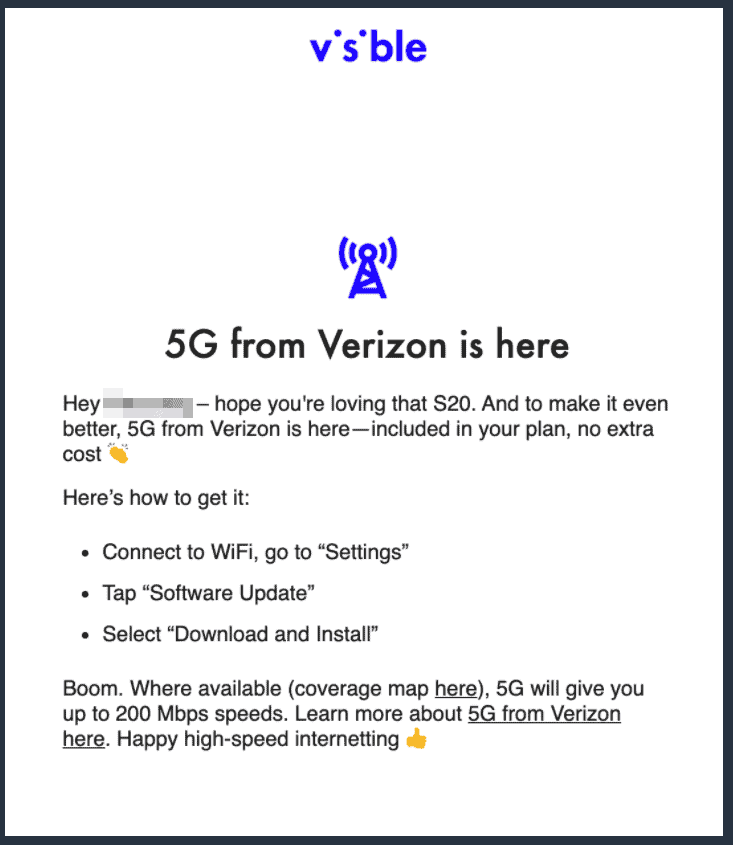