The Ulefone Armor 12 will launch this year, and it will be fueled by the MediaTek Dimensity 1200 5G SoC that got announced today. The phone is expected to launch in June this year, based on the company's info.

This handset will be a rugged phone, as are all other Armor-branded smartphones from Ulefone. The Dimensity 1200 is MediaTek’s 6nm processor, and the company’s first to use Cortex-A78 cores.

It comes with a 1+3+4 configuration, and the Cortex-A78 core runs at 3GHz. There are also three Cortex-A78 cores clocks at 2.6GHz. The remaining four cores are more power-efficient, we’re looking at Cortex-A55 cores.

The chip also comes with a five-core imaging signal processor, which supports camera sensors that can capture photos up to 200 megapixels, and HDR videos. It also comes with an updated six-core APU 3.0 AI processor, with a 12.5-percent better performance than its predecessor.

The device will include 12GB of RAM and 256GB of storage

Ulefone will likely release more information on the device in the near future. Until then, we can only guess the rest of its specifications. You can, however, expect at least three cameras on the back, and quite possibly the latest version of Android installed as well. We’ll see, though, we’re only guessing here. 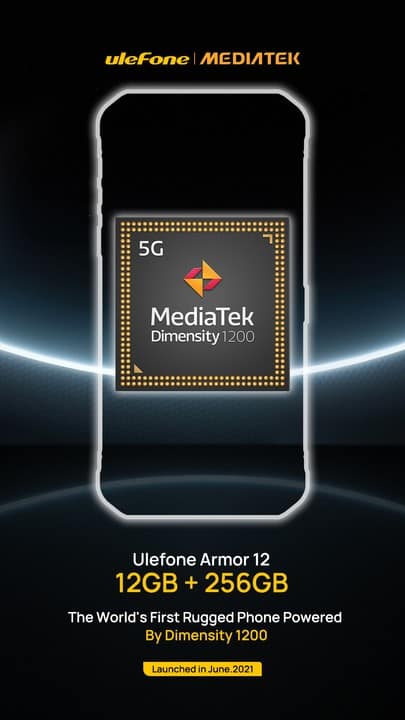