Samsung M-series has been one of the best performing lineups for the company. And the latest edition to it, the Galaxy M02s has now been fully unveiled including its specs, pricing, and color variants.

Notably, the Samsung Galaxy M-series comprises devices that cater to the lower to mid-range price range segment. The devices are also known to pack huge batteries up to 7000 mAh (Galaxy M51).

Fast forward to now, Samsung has now launched the Galaxy M02s smartphone in Nepal. The official poster has also been shared by the official Instagram handle of Samsung Nepal unveiling all the details about the device.

Talking about the processor on Galaxy M02s, it is powered by the Qualcomm Snapdragon 450 SoC with Adreno 506 GPU. The SoC is an octa-core processor, so it would be a decent processor for day-to-day usage.

The device is coupled with 4GB of RAM and offers 64GB of onboard storage. Galaxy M02s offers a dedicated microSD card slot. The display on the device is sized at 6.5-inch. It is a TFT LCD infinity-V display with HD+ resolution.

Coming to the cameras on the Galaxy M02s, it houses a triple camera setup at the rear. The primary lens is a 13MP shooter. There is a 2MP macro and a 2MP depth sensor as well.

Moreover, the infinity-V notch at the front sports a 5MP selfie shooter with an f/2.2 aperture. Now, about the color variants, the device will be available in three color variants, i.e. black, blue, and red.

Other features of this lower-end phone include GPS, 4G LTE, dual-SIM card slot, Wi-Fi b/g/n/ac, along with all the essential sensors. It has Bluetooth 4.2, a USB Type-C port, and our favorite, the headphone jack.

The phone runs Android 10 One UI 2.0 out of the box. However, we cannot confirm if the device will receive the latest Android 11 One UI 3.0 update or not.

There is a 5,000 mAh battery that powers this little champ and it also comes with 15W Fast Charging support. Galaxy M02s has been launched with a price tag of NPR 15,999 (approximately $137) in Nepal.

The pricing of the phone is tipped to be under INR 10,000 for the Indian market. The device is available in Nepal across all online and offline channels. 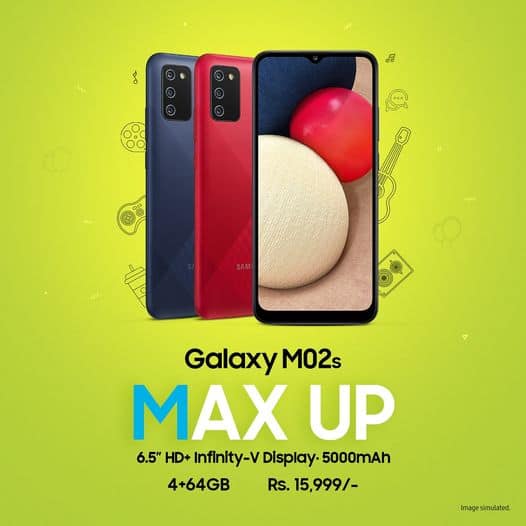