Samsung has officially launched the Galaxy A12, Galaxy A02s, and the Galaxy A32 5G in the UK. All three smartphones arrive as the Korean company's newest value propositions, offering "cutting-edge innovation" at affordable prices.

As the name suggests, the Galaxy A32 5G is a 5G-capable smartphone that costs just £249 for buyers in the UK. Announced earlier this month, it is the cheapest 5G phone from Samsung to date, both in the UK and beyond. The handset is powered by an unspecified octa-core processor, which we believe is the MediaTek Dimensity 720 given its specs (Dual 2.0GHz + Hexa 2.0GHz). Samsung has paired the chipset with 4GB of RAM and 64GB of internal storage, expandable up to 1TB via a microSD card.

On the front, the Galaxy A32 5G sports a 6.5-inch HD+ display with a centered V-shaped notch. The notch houses a 13-megapixel front-facing camera. This phone arguably has the most gorgeous back for any Samsung smartphone though. There's a quad-camera setup on the back with each camera sensor getting its own separate cutout on the back panel. The rear-camera array consists of a 48-megapixel primary camera, an 8-megapixel ultrawide camera, a 2-megapixel depth sensor, and a 5-megapixel macro camera.

The handset gets a side-mounted capacitive fingerprint sensor, integrated into the power button. It packs a 5,000mAh battery with support for 15W adaptive fast wired charging.

The Galaxy A32 5G will be available in the UK from 19th February 2021. It comes in four color options: Awesome Black, Awesome White, Awesome Blue, and Awesome Violet. 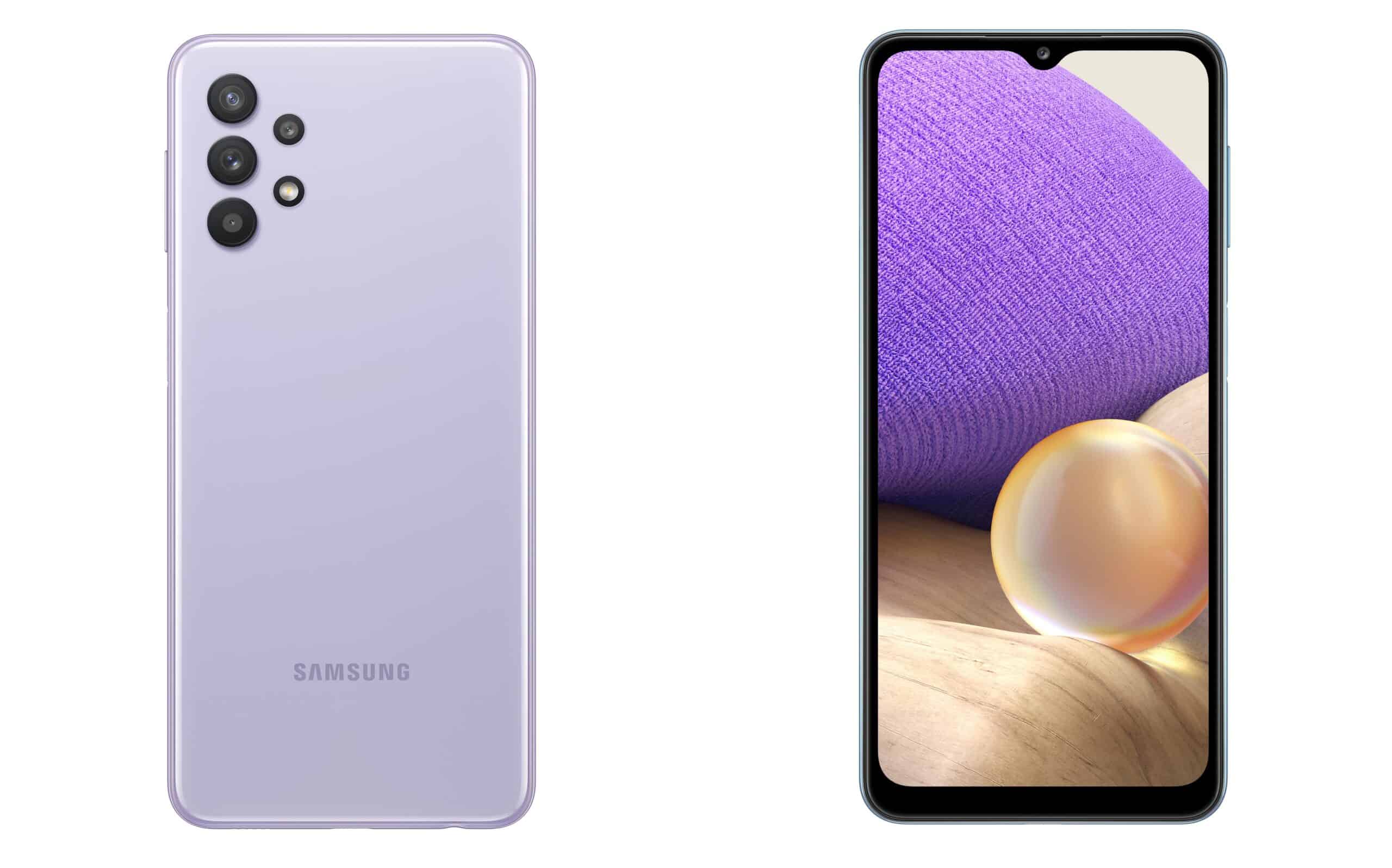 While the Galaxy A32 5G raises the bar for affordable 5G smartphones, the Galaxy A12 and Galaxy A02s are here as Samsung's newest entry-level offerings. The former packs slightly better specs between the two. Powered by an octa-core chipset running at a maximum frequency of 2.3GHz, the Galaxy A12 comes with 4GB of RAM and 64GB or 128GB of internal storage, expandable up to 1TB via a microSD card.

You get a quad-camera setup featuring a 48-megapixel main camera on the back of this phone. The primary shooter is flanked by a 5-megapixel ultrawide camera, 2-megapixel depth sensor, and a 2-megapixel macro camera. The front-facing camera is an 8-megapixel sensor.

The Galaxy A02s, on the other hand, gets only three cameras on the back. There's a 13-megapixel primary camera, a 2-megapixel depth sensor, and a 2-megapixel macro camera. It doesn't get an ultrawide camera. The front-facing camera also degrades to a 5-megapixel sensor.

Additionally, the Galaxy A02s also has its octa-core chipset topped at 1.8GHz. It gets 3GB of RAM and 32GB of storage. However, if that isn't enough, you can always expand that memory up to 1TB via a microSD card.

Both the Galaxy A12 and Galaxy A02s sport a similar 6.5-inch HD+ display as the Galaxy A32 5G. They also pack the same 5,000mAh battery with 15W adaptive fast wired charging. The latter misses out on a side-mounted fingerprint sensor though.

The Galaxy A12 is now available at all major retailers across the country. It is priced at £169 and comes in white, black, and blue color options. The Galaxy A02s will be available in the coming weeks at a retail price of £139. It comes in black and white color variants.

The Galaxy A02s is also seemingly headed to the US. It recently picked up a few necessary certifications ahead of the launch. Samsung will likely announce the price and availability details for the handset for the American market in the coming weeks.

Advertisement
Trusted By Millions
Independent, Expert Android News You Can Trust, Since 2010
Publishing More Android Than Anyone Else
28
Today
165
This Week
467
This Month
1145
This Year
111261
All Time
Advertisement