Razer is not one to shy away from creating some truly futuristic looking concepts, and for 2021 it’s taking another step into the future.

This year for CES Razer revealed an updated line of its Blade 15 and Blade Pro 17 gaming laptops, but it’s also shown off two concepts for 2021 that may or may not ever make it to production.

Called Project Hazel and Project Brooklyn, both concept products look like something from a scene out of Blade Runner 2049. Though Project Hazel is the more likely of the two to reach production as it’s a concept N95 mask that features Razer’s signature style and Chroma RGB lighting. Project Brooklyn meanwhile is a much more ambitious product. An immersive gaming chair.

Out of the two concepts, an RGB Razer Mask could truly succeed

Even one year later, the world is still reeling from the impact of COVID-19. The adjustment to the new normal for many people has been to limit outside interaction. But should you absolutely have to go out for essentials or otherwise, the recommendation is to wear a mask.

That’s where one of the 2021 Razer concepts, Project Hazel, could actually do very well. It’s a concept N95 mask that incorporates a medical-grade respirator and rechargeable active ventilator pods.

You can also detach these pods and replace them as needed. It also comes with Razer Chroma (because of course it does). Razer’s cult of fans is nothing short of insanely loyal. Chroma is not just RGB lighting to the most devout of fans. It’s a way of life.

So it shouldn’t be too hard to imagine a product like Project Hazel finding immediate success among Razer’s legions of fans. That being said, it’s important to remember that this is still just a concept. Even if it looks like it’s actually production-ready.

The mask even features a built-in microphone using Razer’s new patented VoiceAmp technology so that your voice isn’t muffled while wearing it. Making it easy to hear you if you have to speak to someone. And because of the clear shield in front, people can also visually see that you’re talking.

Razer hasn’t confirmed that the mask will ever be released. It does mention though that the mask is currently undergoing “rigorous testing and user feedback.” So there is a pretty good chance that you’ll be able to buy one of these someday. As exciting as Project Hazel is, Project Brooklyn aims to amp things up for gamers. It’s a concept immersive gaming chair that has a built-in 60-inch monitor. As well as Chroma RGB lighting, 4D modular arm rests and more.

The display is made from a rollable technology that, when not in use, will roll back up and then neatly slide into the back of the chair so it’s out of view.

The chair also comes equipped with a built-in peripheral table that rolls out from the arm rests. So almost everything on the chair is completely self-contained. Save for the rig or console you’d be hooking it up to.

All that being said, this is again just a concept device. And given Razer’s reputation for being cool but pricey, this wouldn’t be a cheap product to own. That doesn’t make it any less cool though. If you’re a gamer, you should want to sit in one of these things. 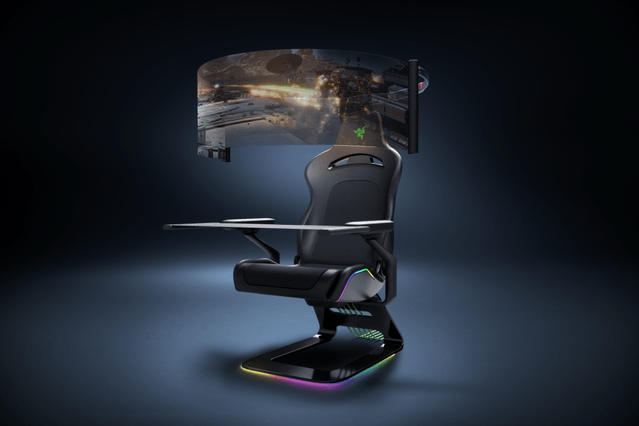