According to a new piece of information that leaked, OnePlus is working on various new camera features. Those features include Tilt-Shift, Starburst, Moon Mode, Hyperlapse, and Focus Peaking.

This information got shared by XDA Developers, and was spotted in the OnePlus Camera app version 6.4.23. That version of the company’s camera arrived with the first Android 11-based OxygenOS Open Beta for the OnePlus 7 and 7T series.

Do note that these features are not available in the app at the moment, but various code strings suggest they’re coming. Chances are they will be included in the upcoming OnePlus 9 series, though.

The Tilt-Shift mode is the first mode we’ll talk about. It refers to tilt-shift photography or miniature faking. That is a photography technique that makes scenes appear much smaller than they actually are. You can actually see a graphical representation of this mode below. 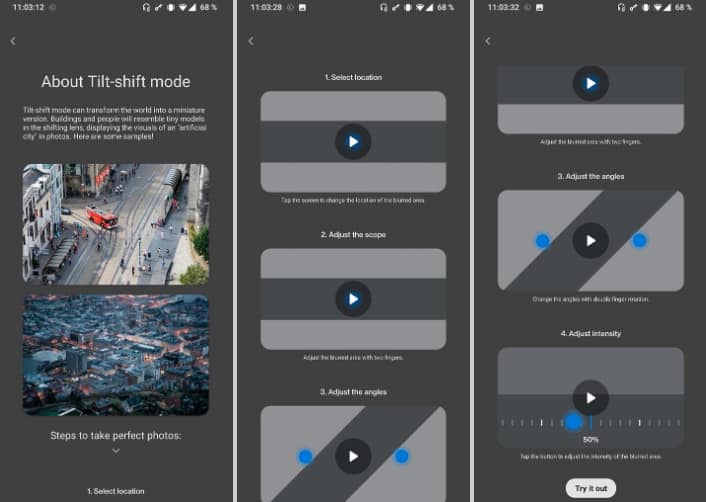 The Starburst mode will also be included it seems. The Starburst effect appears when you point a camera to a bright source of light, like the sun, for example. That creates a radiating star-shape, and an upcoming OnePlus Camera will allow you to capture that photo effect.

The Moon Mode is kind of self-explanatory. The OnePlus 9 series won’t include a periscope camera, but it seems like you will be able to capture a photo of the moon, and the sky. The camera will allow you to select different filters to adjust the color of the moon as well.

Another mode that will be included is the Hyperlapse mode. The time-lapse mode is already included, and hyperlapse will join it. Hyperlapses add movement over long-distances, unlike time-lapses.

The last camera mode we’ll talk about is ‘Focus Peaking’. This feature is supposed to highlight any in-focus areas in the viewfinder, at least if it’s similar to a feature implemented in mirrorless cameras.

The OnePlus 9 series is expected to launch in March. Nothing has been confirmed just yet, though, so stay tuned.