A new Nokia smartphone codenamed "Quicksilver" has been spotted on benchmarking platform Geekbench. The listing reveals the device to be powered by an octa-core Qualcomm ARMv8 processor operating at a base frequency of 1.8GHz. The phone has 6GB of RAM and is running on Android 11.

The device scored 471 points in single-core tests and 1,500 points in multi-core tests on Geekbench. Going by these numbers, the Nokia Quicksilver appears to be a budget offering from HMD Global.  The source code of the listing further reveals that the phone has an Adreno 619 GPU. The recently announced Qualcomm Snapdragon 480 5G SoC features this GPU.

It is an affordable 5G mobile platform from Qualcomm and the first 5G SoC in the budget-friendly Snapdragon 4-series chipset line. During the announcement, the company had said that Nokia is one of the phone makers interested in launching a phone with this chipset. It appears this "Quicksilver" is that phone.

It may seem unusual for a budget smartphone to get 6GB of RAM. However, the OPPO recently launched the A93 5G powered by the same Snapdragon 480 5G SoC with 8GB of RAM. Moreover, this device was also spotted on Geekbench with the same processor identifier as the Nokia Quicksilver: ARM implementer 81 architecture 8 variant 8 part 2052 revision 14. It posted similar single-core and multi-core scores as well.

Nokia Quicksilver could be an affordable 5G smartphone

In all likelihood, this "Quicksilver" phone is an affordable 5G offering from Nokia. The Snapdragon 480 5G SoC pairs with the Snapdragon X51 5G modem that supports both mmWave and Sub-6 GHz spectrum. It supports display refresh rates of up to 120Hz and cameras up to 64-megapixel.

That said, the Adreno 619 GPU can also be found on the Snapdragon 690 5G SoC from Qualcomm. It is a slightly more powerful alternative to the Snapdragon 480 5G. There are reports that HMD Global is already working on a mid-range 5G smartphone which may arrive as Nokia 6.3/6.4 soon. We'll now have to wait and see whether the Nokia Quicksilver is indeed the Nokia 6.3/6.4.

Nokia also has a smartphone with model number TA-1322 in the works. It recently picked up the FCC certification. It is also seemingly a mid-range handset packing a rear-mounted fingerprint scanner, a 4,000mAh battery, and a circular rear-camera setup.

Either way, HMD Global does seem to be developing affordable 5G Nokia smartphones for an early 2021 launch. The Finnish company has big ambitions in the smartphone market and low-cost 5G devices could be pivotal to achieving those targets. 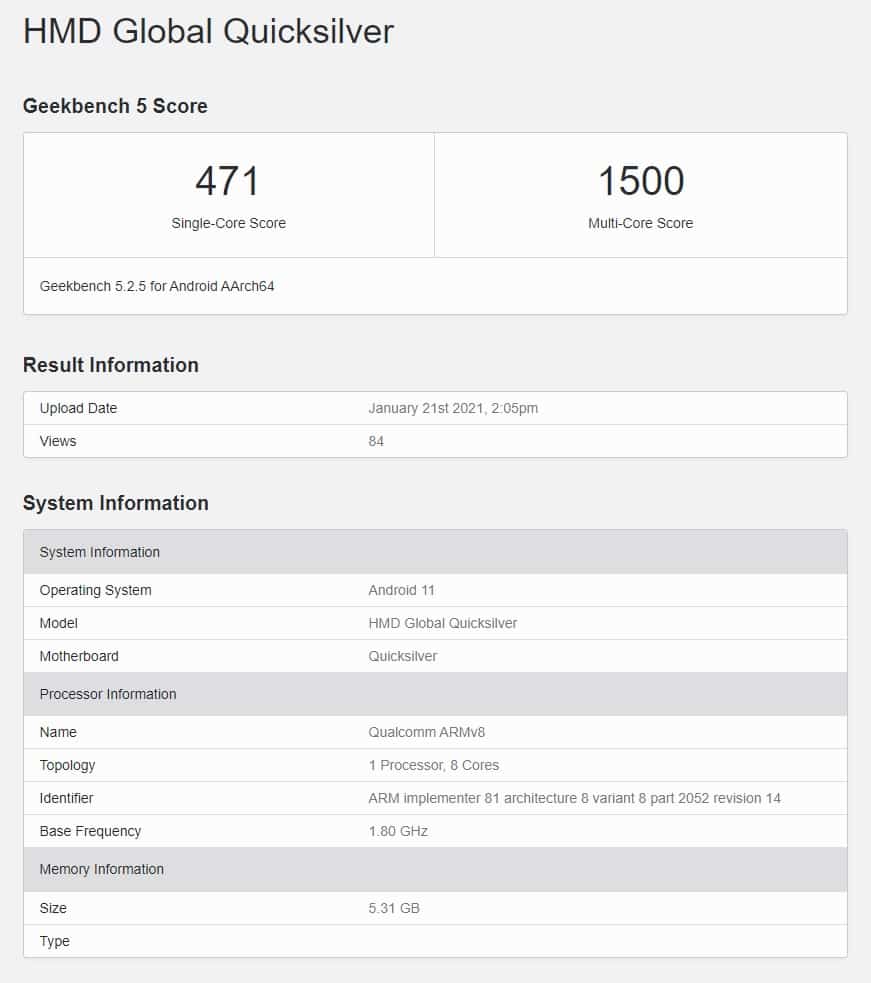