Black Shark is teasing that 120w fast charging is coming to its latest gaming smartphone. The Black Shark 4.

While the company hasn't officially announced the phone itself yet, it has started to tease the device on its Weibo account. The Black Shark 4 will be the successor to the Black Shark 3 and Black Shark 3 Pro. Which were released back in 2020.

Among the gaming smartphone options out there, Black Shark has seen some of the most popularity. While it's had to compete with larger brands like ASUS and Razer, it also has had a leg up on both of those brands in one way or another.

Razer for example hasn't released a gaming phone since 2018's Razer phone 2. While Black Shark has been steadily releasing new models every year. And ASUS tends to dominate the gaming smartphone market with the ROG phone brand, but its devices are always a bit more expensive.

What Black Shark has lacked in brand awareness, it's made up for it with the more affordable prices of its gaming phones.

The Black Shark 4 will certainly need that fast charging capability. Because it comes with a slightly smaller battery than the previous model phone. According to Black Shark's teaser, the device will come with a battery capacity of 4,500mAh.

That's compared to the last phone which had a battery capacity of 4,720mAh. While it's not a massive difference, it's enough to probably shave off a few extra hours of gameplay time. Especially when you consider all of the other hardware that the Black Shark 4 is likely to carry.

Hardware that will no doubt drain the battery faster so the phone can perform at optimal settings for high-end games.

A full charge in less than 15 minutes?

The last part of the teaser highlights how quickly you'll be able to charge up the Black Shark 4.

The teaser is apparently suggesting that you can get a full charge in less than 15 minutes. Though that does seem highly unlikely as most phones with a larger battery like that take upwards of an hour to get a full charge.

That being said, it can't currently be ruled out that the phone's battery charges this fast. Also worth noting is that maybe the 15 minutes is referring to how quickly you can get a partial charge. Black Shark will probably confirm those details once it officially announces the phone. 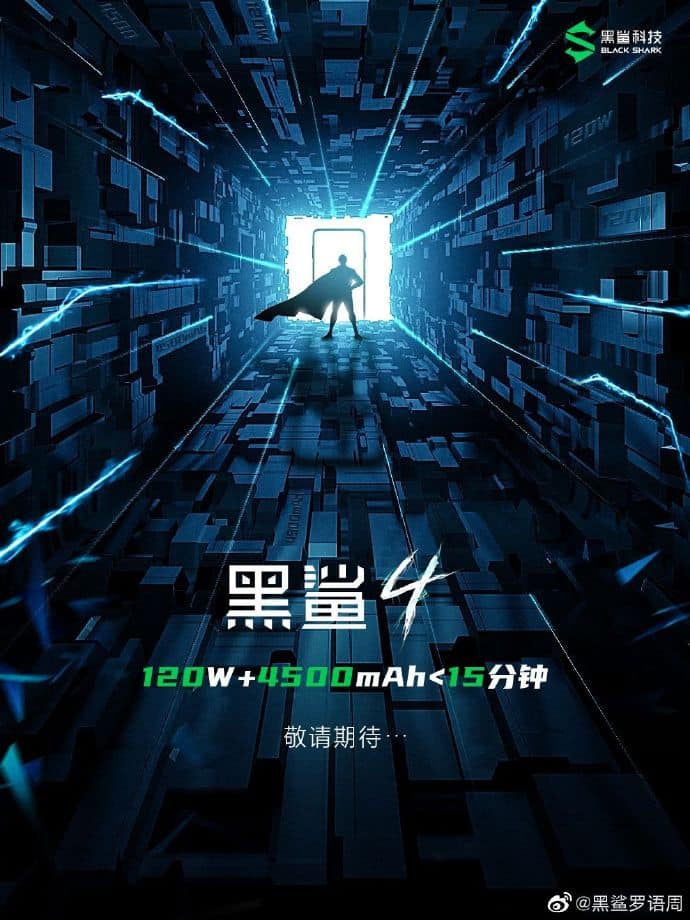