Xiaomi has sold more smartphones than Apple in Q3 2020. This information comes from Gartner, by the way, who shared a list of top smartphone manufacturers for Q3 2020.

This is a list of smartphone sales to end users. As you can see in the table below this paragraph, Samsung is still at the very top of the food chain. That was expected, as the South Korean tech giant is still miles ahead of the competition. 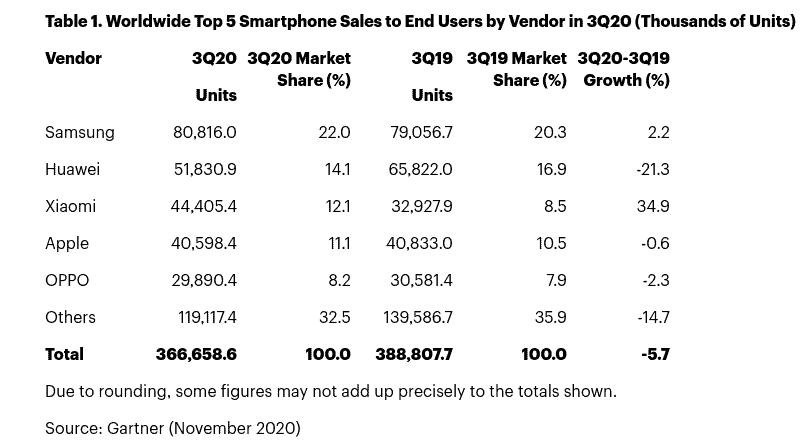 Samsung is followed by Huawei, Xiaomi, Apple, and OPPO, respectively. As you can see, only five top companies are listed here, while all others are under the ‘Others’ section.

With that in mind, Samsung is holding 22-percent of the market, while it’s followed by Huawei’s 14.1-percent. Xiaomi is in third place with 12.1-percent, while Apple is holding 11.1-percent. OPPO managed to grab 8.2-percent.

Every single one of these companies grew YoY, except for Huawei. Huawei’s market share shrunk from 16.9-percent, to 14.1-percent, and the main reason for that is the US ban. Huawei is unable to use Google services, and that is only a part of the problem.

Xiaomi sold more smartphones than Apple, and grew quite a bit YoY

What is also interesting, is the fact that Samsung managed to sell almost twice as many smartphones as Apple in Q3 2020. Samsung is also holding almost twice as much market as Apple, according to this info.