According to App Annie, TikTok was the most downloaded app of 2020. This data comes from both iOS and Android app stores. So this is among all smartphones, and not just those on one or the other platform. Trump is one of the bigger reasons why it was so popular this year. Of course, another is the pandemic, with many people stuck at home for the majority of the year and needing something to do.

However, the Trump Administration attempting to ban TikTok in the US, since it is owned by a Chinese company, really helped its popularity. It got a lot of people to download the app and see what it is all about. And why the government is looking to ban the app.

TikTok continues to grow, even as the Trump Administration backs away from wanting to ban it so much. Though, with them leaving office next month, it's very unlikely that TikTok will get banned in the US. However, it does remain banned in India, its largest market. 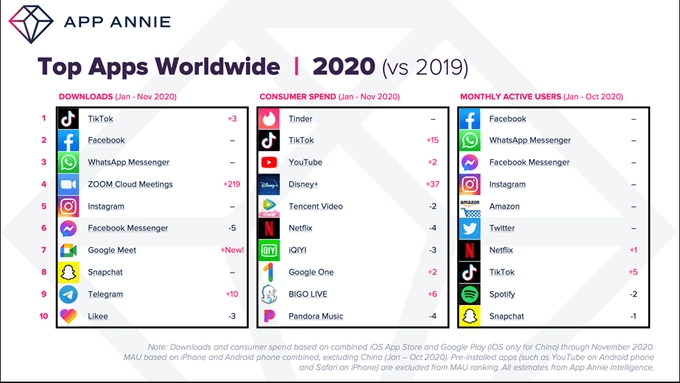 Zoom and Google Meet also shot up the charts in 2020

To absolutely no one's surprise, Zoom and Google Meet also made it into the top 10 most downloaded apps of 2020. With Zoom climbing 219 spots to the number four spot. And that's because everyone is using Zoom for school, work, and even keeping up with friends and family.

Google Meet shot up to number seven, and it didn't even exist last year. As it is a new app, that launched in the early part of this year.

Of course, when it comes to the monthly active users, Facebook apps still are at the top. With Facebook, Messenger, Instagram and WhatsApp in the top four – in that order. Followed by Amazon, Twitter, Netflix, TikTok, Spotify and Snapchat. So basically, the apps you'd expect to see in the top ten for monthly active users.