There aren't many 4K Android TV projectors on the market, but the Nebula Cosmos Max 4K is definitely the best one.

Anker, the parent company of Nebula, sent over the Cosmos Max 4K for us to use and review. We’ve been using it for almost a month, before writing this review.

Anker’s sub-brand Nebula isn’t new at making projectors. But the Nebula Cosmos Max 4K might be its best one yet. I’ve reviewed a couple of other cheaper, and portable projectors from Nebula, and honestly, I did not have a lot of high expectations for the Cosmos Max 4K. As my previous experience found that these projectors were low-resolution and very dim. Tough to see even in a dark room. That is not the case with the Nebula Cosmos Max 4K. Which is particularly good news, given the price tag here.

Anker also ditched AOSP Android for its projectors, and adopted Android TV. Which is the right move, to be honest.

I was honestly very surprised when I first turned on the Cosmos Max 4K, and even in a bright room with plenty of sunlight, I was able to see the projected screen on my wall. Meaning that you can use this projector during the day as well as at night. Which also means that you can actually use this projector as a replacement for your TV. 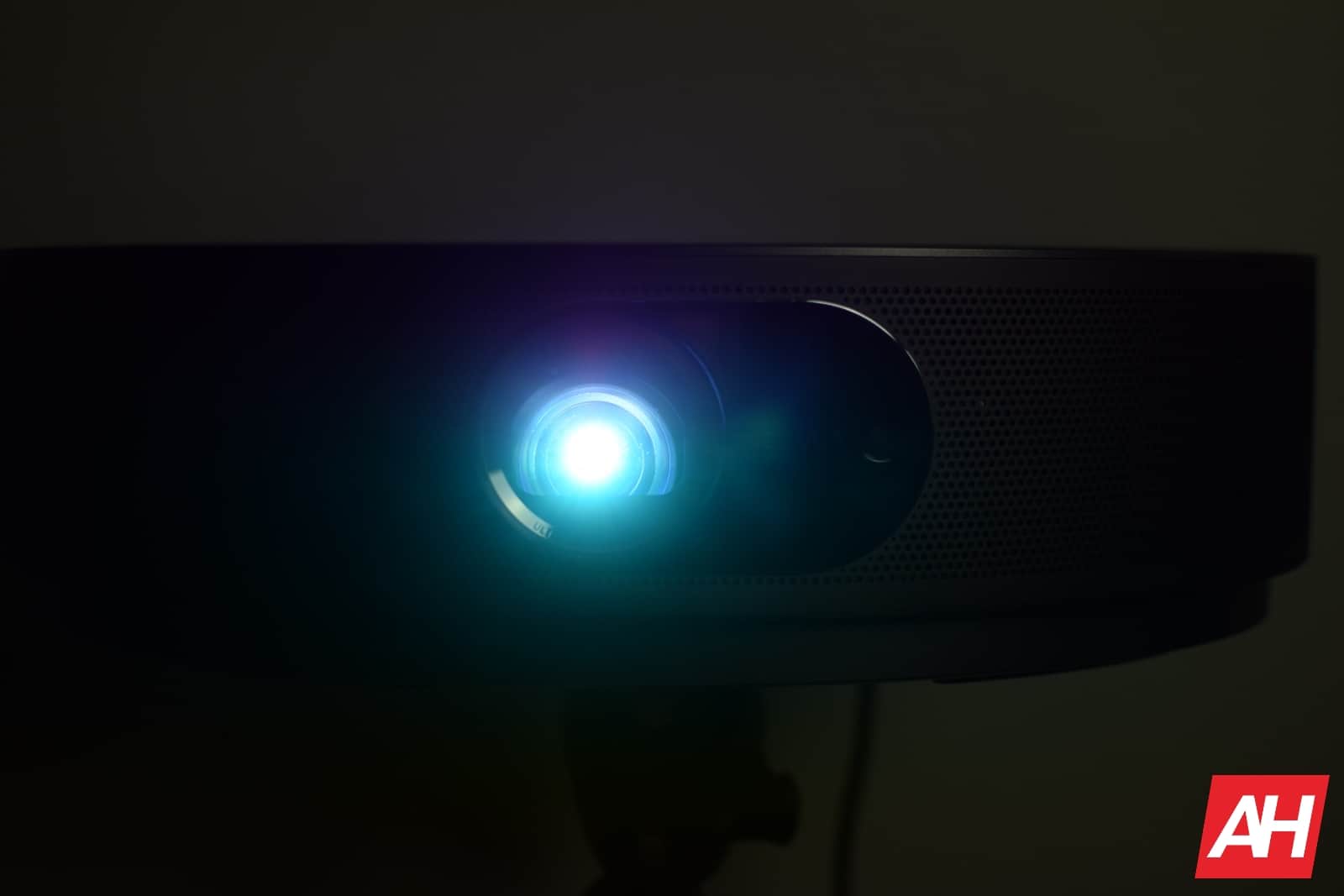 At 1500 Lumens, it is still a little dim during the day, depending on how much light is in the room, so you’ll have trouble seeing some dark TV shows and movies. However, most content, you’ll have no trouble seeing.

And at night, the Cosmos Max 4K looks absolutely stunning. It’s super bright, sometimes too bright, if we’re being honest.

This is a 4K projector, but like most projectors, it’s sort of in the middle of 1080p and 4K quality. It does look vibrant and sharp however. Of course, the closer it is to the wall (with a smaller image) the sharper it looks. The further away it is, the less sharp it is going to look. That’s true of most projectors that are not short-throw projectors though.

The picture quality here is quite stunning. And I didn’t miss a thing when watching TV on the Cosmos Max 4K versus my Hisense 65-inch 4K TV. Sure the TV was brighter, but picture quality was really similar.

Paired with Dolby Digital Plus support

Of course, with a great display, you need great sound. The Cosmos Max 4K does come with a 360-degree speaker built-into the projector. And it does support Dolby Digital Plus. I was sad to learn that it does not have Dolby Atmos. Though Atmos would have driven the price past $2,000, so this shouldn’t be a huge surprise. 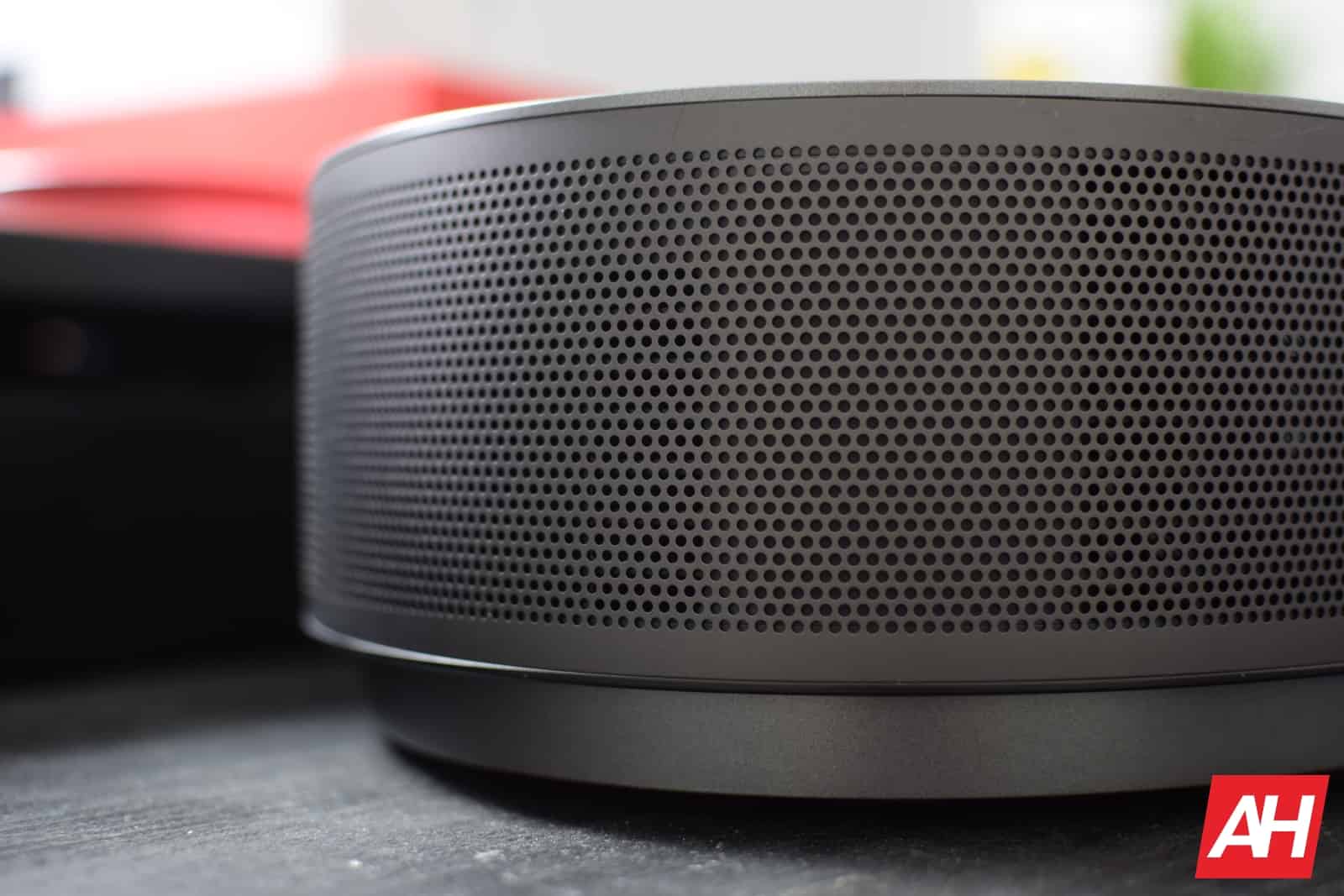 It’s loud enough to fill an entire room with sound. And the bass is nice and deep. With mids and highs being crystal clear. With the two HDMI ports on the back, you can also plug in a sound bar like the Sonos Beam or Arc to get even better audio. Which I did (with the Sonos Beam), but didn’t keep that setup. I found that it wasn’t really needed. The audio quality on the Cosmos Max 4K was enough.

Apart from the brightness of this projector, the sound also surprised me. I was not expecting it to sound this full and rich. But very glad that it does.

The Cosmos Max 4K does come with a good number of ports. We’re looking at two HDMI 2.0 ports capable of 4K output. As well as two USB-A ports and an optical port available.

Because there are two HDMI ports available, I did plug in my PS5 to the Cosmos Max 4K. And I was surprised yet again. I expected some lag, and for some games to be not as bright, like Rocket League. But there was almost no lag. It was just like playing on a regular TV. Even games like Spider-Man: Miles Morales which is somewhat dark, played pretty well on this bright projector. To be quite honest, I preferred playing on this projector than my own TV. Mostly because it has a much larger picture. It can give you up to an 150-inch image. Depending on the size of your room. That’s amazing for playing the new PS5. 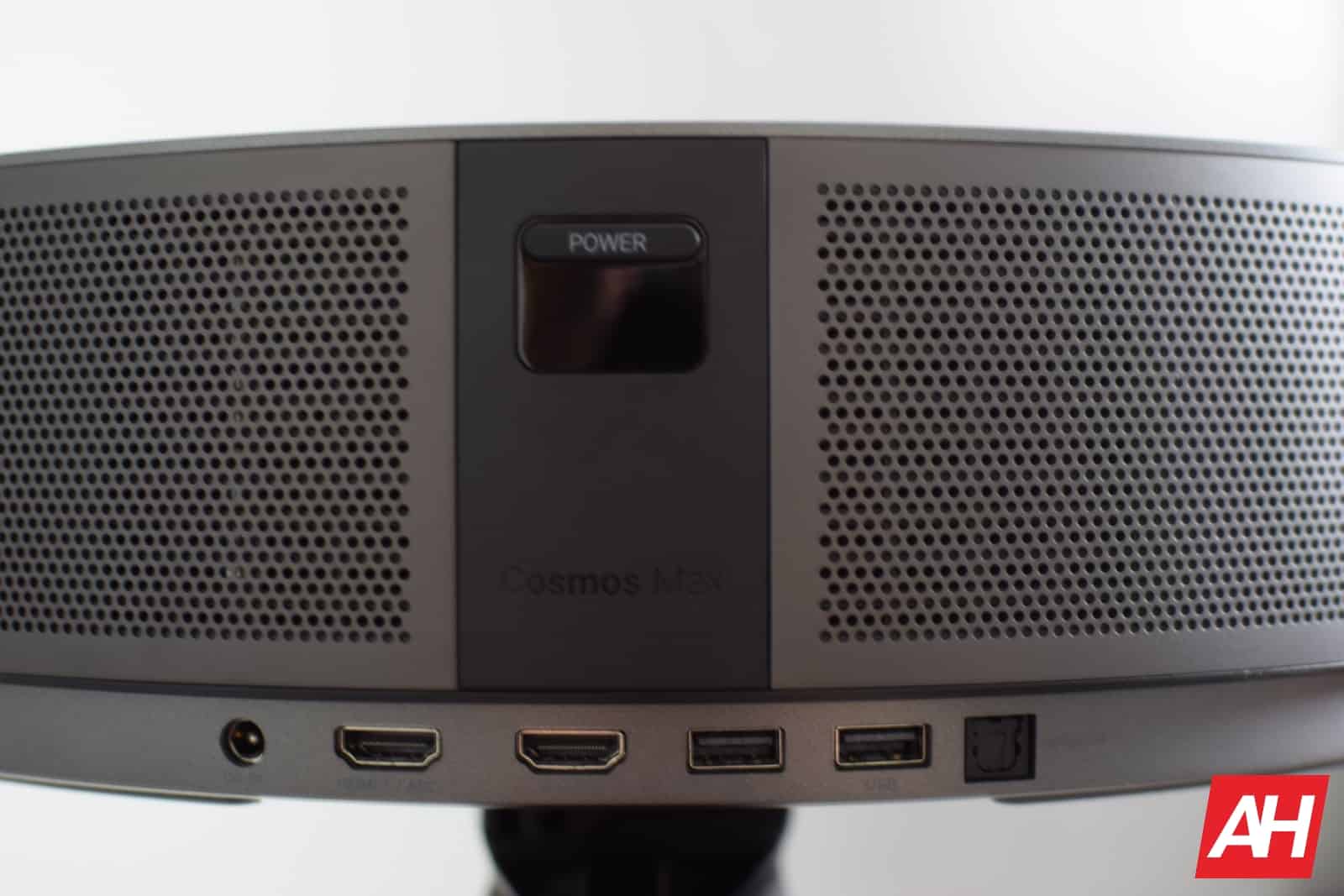 Of course, you can also use these ports to plug in a soundbar as I mentioned already. Or another set-top box. Say you don’t like Android TV, you can plug in a Roku or Fire TV. Or you can do what I did and plug in a Chromecast with Google TV. I really like the Google TV interface, so I did use that on the Cosmos Max 4K for a few days and it worked really well.

Basically the bottom line is, you can really build out a nice entertainment center around the Cosmos Max 4K. Add in a nice soundbar, plug in a console, and you’re good to go.

I’ll be honest, when the Cosmos Max 4K arrived, it was a lot bigger than I expected. And I’m not entirely sure why I expected it to be much smaller. Perhaps because of the other Nebula projectors I had reviewed were the size of a soda can? But anyways, it is a pretty beefy projector. Given what it is capable of, that shouldn’t surprise you.

It’s mostly made of metal. Which gives it a really nice look and feel. There’s speaker grilles all around the projector. With a power button on the back, and the ports on the bottom portion of the back. The front has the projector itself and the laser to help make sure it is in focus. On top, there is what appears to be a bit of glass in the middle, to make a sort of display. Basically that lights up the Nebula logo and a series of stars. To help make it look like you’re looking up at the sky. Thankfully, you can turn this off in the settings. Not that it’s a bad thing to have, but if you want total darkness, you can have that.

On the bottom, there is a slot for a tripod screw. Allowing you to mount it on a tripod, instead of resting it on a table in your living room. There is also a VESA mount available. This is so that you can mount it to the ceiling. Which is definitely the better way to use the Cosmos Max 4K. That way you won’t block the projector when you walk in front of it. However, since I live in an apartment (and have to give the Cosmos Max 4K back to Anker soon), I didn’t even attempt to mount it to the ceiling.

The hardware is pretty top-notch. And honestly, that’s what you expect from an Anker brand. That is what Anker has made their brand on. High-quality products at low prices.

For the most part, Android TV is exactly what you’d expect it to be on the Cosmos Max 4K. It has all of the popular apps like YouTube, YouTube TV, Hulu, Amazon Prime Video, etc.

However, there is one glaring omission. And that is Netflix.

Honestly, it’s very annoying not having Netflix easily installable. And it’s not Nebula’s fault. You see, Netflix will only certify devices that will sell a million units – this appears to mostly be “brands that sell a million devices” as it’s unlikely most Android TV sets hit a million. But since Nebula doesn’t sell a lot of projectors, Netflix won’t certify devices like the Cosmos Max 4K. Which means that you are stuck sideloading the app.

This has been the case with all of Nebula’s projectors, so it’s not just a problem on the Cosmos Max 4K. Hopefully Netflix will change their stance here though. 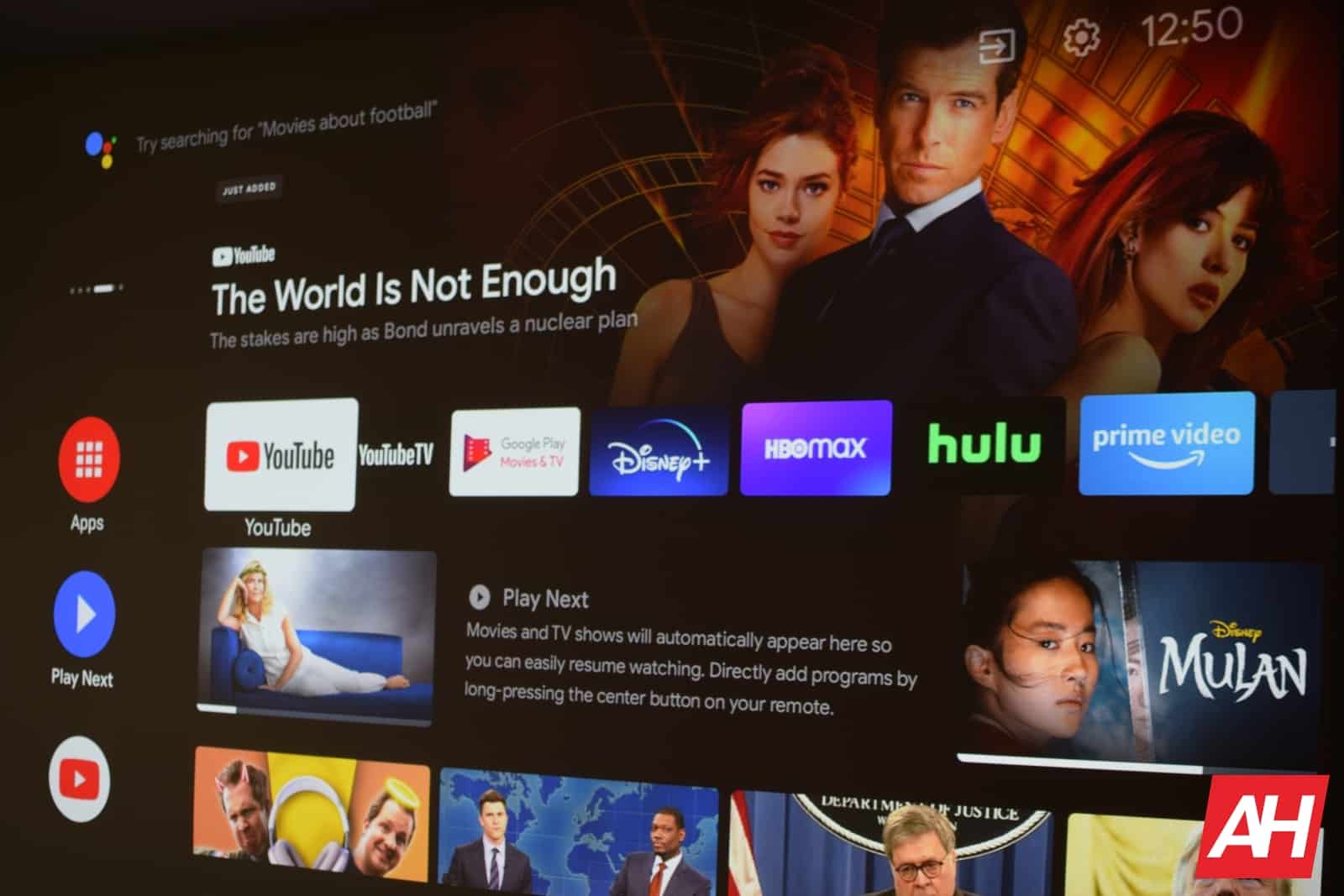 Otherwise, it’s Android TV 9 as you’d expect. With Google Assistant, Chromecast and more. The overall software experience is good. It’s fluid and pretty quick. Honestly, it’s more responsive than Android TV built into any TV set I’ve used in the past five or so years. Even faster than my Hisense Android TV. Which is really impressive, to be quite honest. And you get a decent amount of space too. You get about 12GB of usable space – meaning there’s probably 16GB inside. After installing all of my apps – and some I don’t generally use on Android TV – I still had almost 10GB free. Which is great news.

For those that are unaware, Keystone Correction is a feature in most projectors that will automatically adjust the screen so that it is straight. No matter what angle the projector is at. It works on the Cosmos Max 4K, but not quite good enough for my OCD. You see if you put it in a corner and angle it at the wall, you can still get it straight on the wall. But the backlight will still show a rectangle that is not straight. Which really messes with my OCD. Obviously that won’t be a problem for everyone, but it is worth noting.

You can adjust it yourself, if it doesn’t auto adjust the way you want it to. This is a good feature to have if you are planning on putting the Cosmos Max 4K in a corner in the living room and aiming it at the middle of the wall. 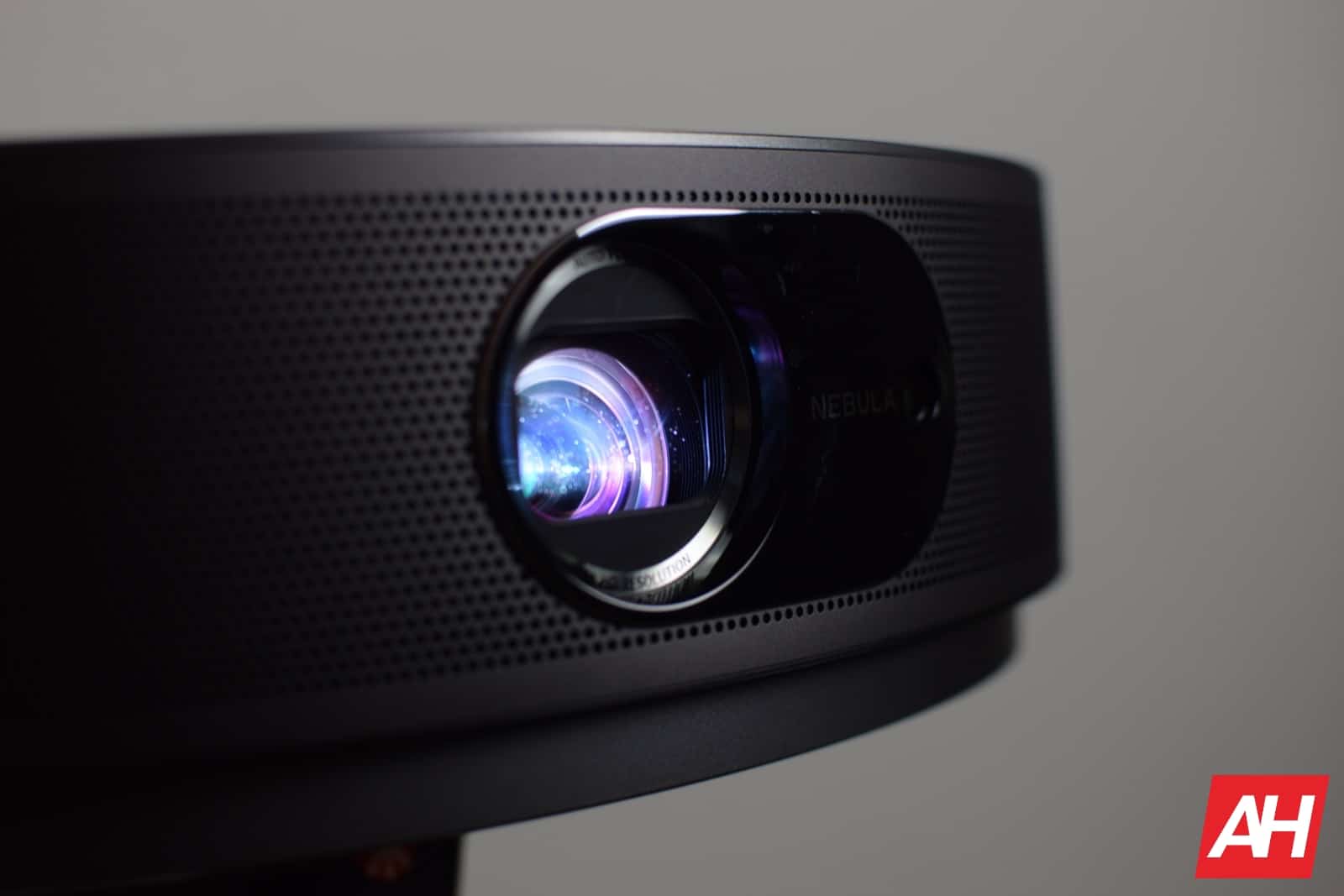 Should I buy the Cosmos Max 4K?

Overall, I am actually really impressed with the Cosmos Max 4K. I guess given the price tag, I should be, right? Well good projectors often cost quite a bit of money, so for a good 4K projector, $1,800 is actually somewhat inexpensive. There’s really only a couple of issues with the Cosmos Max 4K. One is the Netflix issue I mentioned above, and the other being the fact that it is not a ultra-short throw projector. Meaning someone can easily walk in front of it and mess up the picture.

If those two are not major issues for you, then definitely, you should buy the Cosmos Max 4K.