As the new year is approaching soon, Motorola is getting ready to add a new smartphone to its portfolio. Notably, the rumored Motorola Nio has appeared on Geekbench.

According to the RootMyGalaxy, Motorola Nio will come powered by the Qualcomm Snapdragon 865+ processor and will be coupled with 8GB of RAM.

Well, there is a slight disappointment in terms of processor. We are not saying that the Snapdragon 865+ is in any way an underwhelming processor.

It is the fact that, while other OEMs are trying to give the latest and greatest to users, here is Motorola, still packing a year-old SoC on its devices.

Good thing is that Motorola Nio will be the first smartphone from the OEM that will come with Android 11 OS out of the box. The phone has already appeared in some leaks and now it has surfaced on the Geekbench listing.

Motorola Nio is listed with model number XT2125-4 on Geekbench

As seen on Geekbench, the upcoming smartphone from Motorola, the Motorola Nio, is listed with model number XT2125-4. And the listing reveals that the phone will run Android 11 out of the box.

Earlier rumors suggested that the phone will come with Snapdragon 865 processor. However, the Geekbench listing highlights that it is actually the Snapdragon 865+ SoC.

It is clubbed with 8GB of RAM and Adreno (TM) 650 GPU. Talking about the Geekbench scores, the Motorola Nio managed 958 points in the single-core and 2,969 points in the multi-core test.

Sadly, that's about it from the Geekbench listing regarding the specifications of the Motorola Nio. The listing reveals nothing more about the device.

Looking back to earlier leaks, the Motorola Nio is tipped to come with a Full HD+ resolution 90Hz display. Moreover, it is also rumored to pack a 64MP main sensor. This will be joined by a 16MP ultrawide and 2MP depth sensor.

There will be a dual-punch hole at the front, which will house the 16MP and 8MP sensors. We expect more information about Motorola Nio to pour in as the device is almost ready to be launched.

We hope that unlike its previous devices, Motorola with a sane mind keeps the price of this device affordable considering it packs an old processor. Details about the launch date and other specifications should also be announced soon. 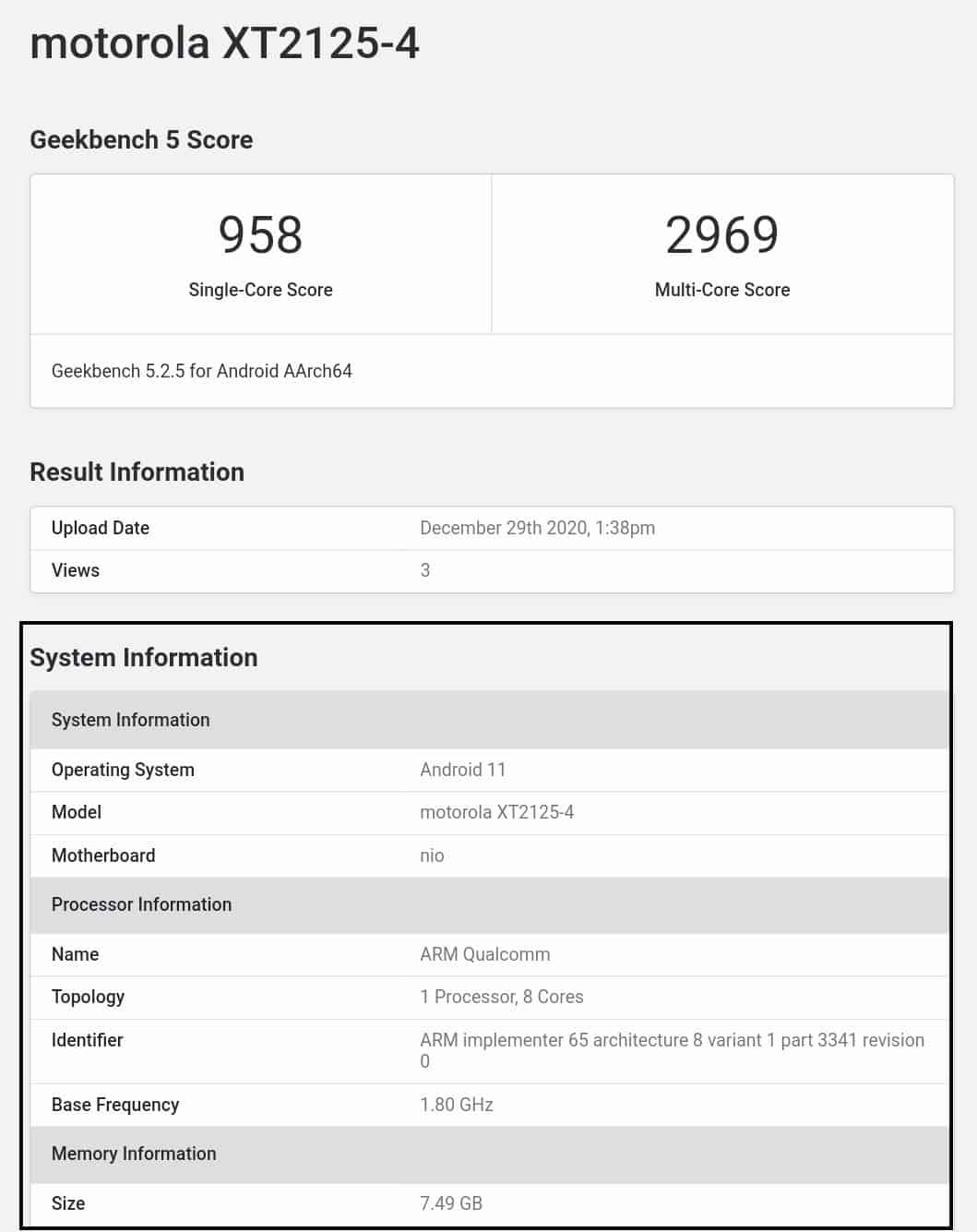