T-Mobile is the “only adult in the room” on 5G, compared to AT&T and especially Verizon. Or at least it is according to the latest scathing blog post from the magenta-hued carrier.

The company’s words, attributed to President of Technology Neville Ray, focus on the 5G ISP industry as a whole. Including some less-than-kind but nonetheless accurate statements about AT&T’s earlier use of the term 5GE for its 4G LTE Advanced network. But the bulk of the statements are aimed directly at Verizon. The executive points out that not only is the Verizon 5G network slow. It’s also extremely limited.

This is all about nationwide Verizon 5G

Now, central to the T-Mobile tirade is the fact that Verizon 5G has just gone nationwide. But, as indicated by Mr. Ray, that rollout doesn’t seem to be going all that well.

First and foremost, that’s because of speed and the way that Verizon implemented its nationwide 5G network. To begin with, that’s a sub-6 network based on 4G LTE and shares spectrum with 4G. Verizon didn’t add any new spectrum to support its switch. So the result is slower speeds for everybody. In fact, with Dynamic Spectrum Sharing (DSS) turned on, the network performs in a way that’s comparable to 4G on speeds “most of the time.” Even according to Verizon CTO Kyle Malady.

So users on Verizon are experiencing speeds similar to 4G on 5G. And to top that off, the company’s years-long roll-out of 5G mmWave — which can peak at speeds approaching 1Gbps — hasn’t grown much. T-Mobile notes that users on Verizon only have those speeds around 0.6-percent of the time. That’s based on data pooled by widely-used network benchmark-maker and analysis firm Ookla.

According to T-Mobile and the data it cites, Verizon is now the slowest network in terms of median 5G speed. That change occurred at around the same time its nationwide coverage was turned on.

T-Mobile’s approach to 5G has differed in that it offers a dedicated bit of spectrum for just 5G. That’s across the mid-, high-, and low-band spectrum. That ‘layer cake’ approach, at least according to the carrier, allocates spectrum specifically for 5G. And that, despite the downsides to its recent merger with Sprint — the likely source of that extra spectrum, allows a higher data rate for the next-gen networks than Verizon can offer. 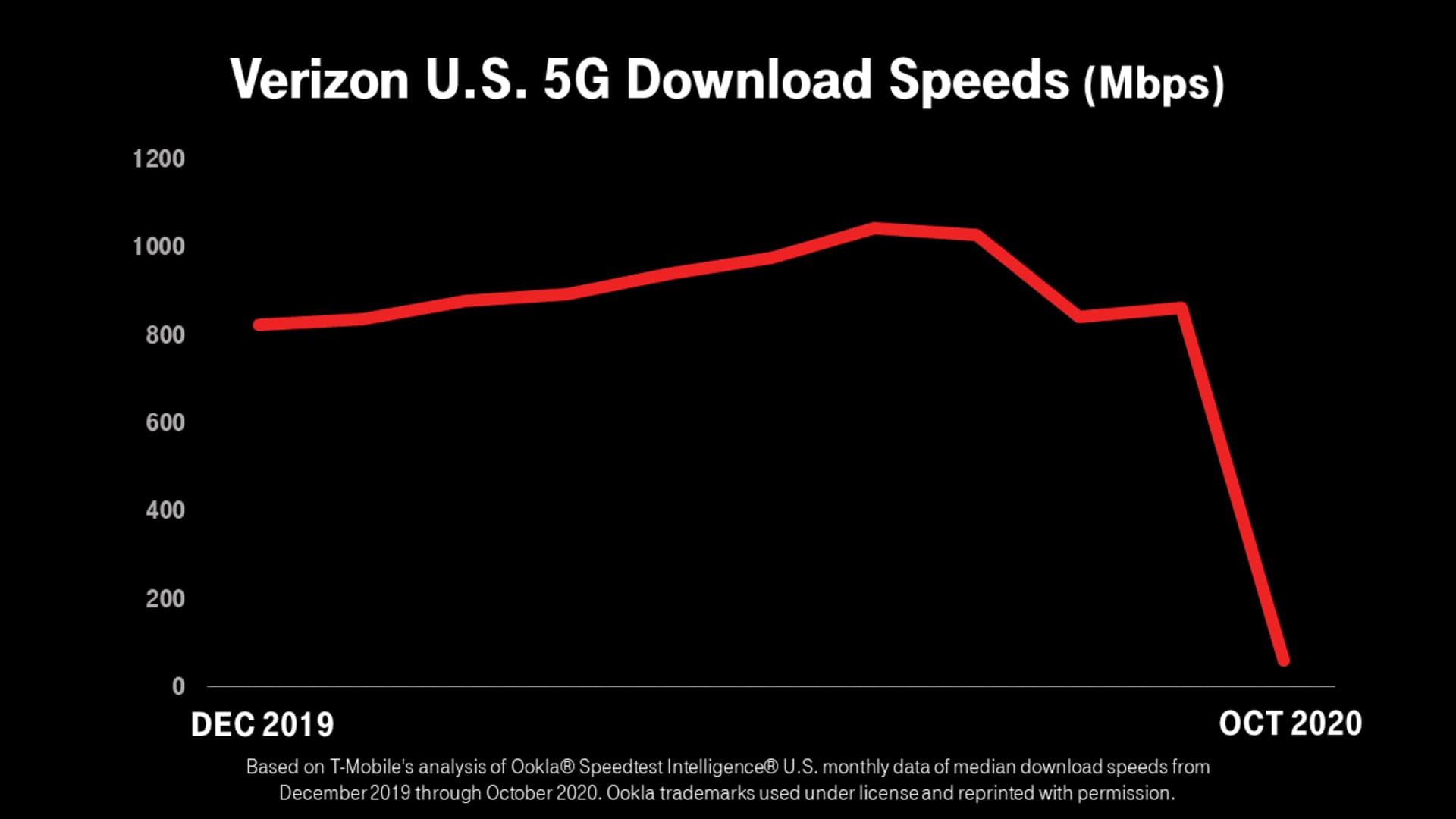