Smartphone cameras have evolved greatly over the past few years. Not just photography capabilities have improved, but smartphones are also seeing an increase in the number of camera sensors they equip. A triple or quad rear-camera setup is a norm these days while we also saw a penta-camera phone come out last year.

But how much is the maximum? Lens Technology, a Chinese firm that engages in the development and production of parts and components for mobile devices, believes the number of camera sensors can still be doubled. The Changsha, Hunan based company has recently obtained a design patent for a smartphone with no less than eight rear cameras.

It's a standard-looking smartphone with a full-screen design and minimal bezels. There aren't any notches or punch-hole cutouts for a front-facing camera, suggesting that it would equip an under-display camera solution. And while there's no visible camera at the front, the back is a stark opposite.

The phone has two camera sensors and an LED flash inside an obliquely positioned camera housing in each of the four corners. That makes for a total of eight cameras and four LED flash units on the back. Since it's a design patent, details about the camera system are unknown.

There's also seemingly a microphone on the back. It should allow for better sound capturing during video recording. The phone has one physical button on the left side and a USB port at the bottom.

Lens Technology filed for this design patent in homeland China earlier in May this year. The patent application was approved and added to the World Intellectual Property Organization (WIPO) database last month.

A smartphone with eight rear cameras

This octa-camera setup is not the most number of cameras we have seen on a smartphone design patent. Back in 2018, LG was granted a design patent for a smartphone with a whopping 16 cameras. However, LG's module packed all 16 sensors in a single square housing with just one flash unit underneath them.

Lens Technology, on the other hand, has placed two sensors each in every corner of the phone. This appears to be a consciously chosen design as each housing also gets its own LED flash. The four camera modules may pack different types of sensors, such as wide angle, ultra wide angle, telephoto lens, macro camera, or others.

However, it's unclear whether this is purely a design aspect, or such an arrangement also adds value during photography. Some of the camera sensors are anyways likely to get blocked during hand-held operations.

That said, this is merely a design patent that may never come to fruition. Lens Technology isn't known for making smartphones and this is one complex design and form factor for the current generation.

Founded in 2003 by Zhou Qunfei, the world's richest self-made woman, Lens Technology specializes in touch panel cover glasses, fingerprint modules, camera modules, camera lenses, and other parts and components for smartphones, tablets, and smartwatches. Samsung, Huawei, and Apple are some of the company's biggest clients. 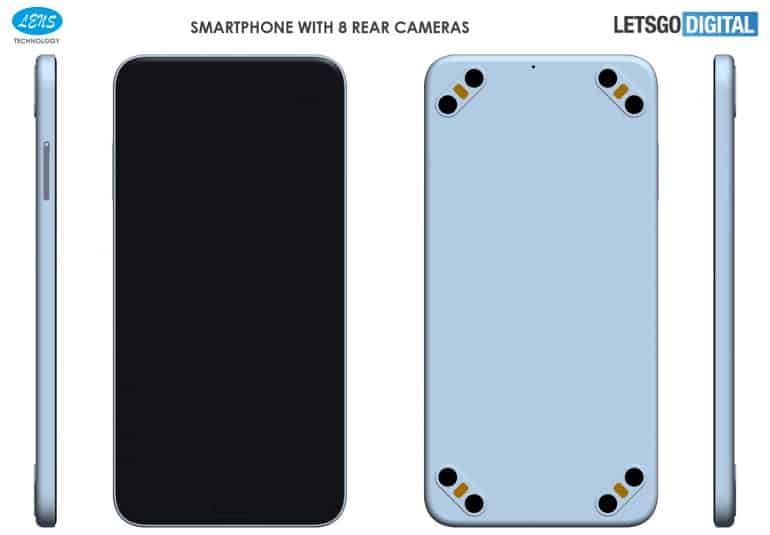