Shadow is probably the most versatile cloud gaming option out there, and now it supports next-gen gaming.

Today the company rolled out new plans and new hardware (technically) for the service. The hardware of course is not something that subscribers need to get their hands on physically. Rather they can pay the new monthly fee option to get access to more powerful virtual systems.

If you’ve been waiting with baited breath to play games at their best, now you can with Shadow and its next-gen gaming options. You can also stick with the base option, which Shadow calls Boost, and that costs $12 a month and still provides a pretty decent gaming experience.

Next-gen gaming from Shadow is powered by NVIDIA RTX cards

Next-gen gaming from Shadow is powered by NVIDIA’s first wave of RTX cards. Unfortunately these aren’t the 30-series, but the cards are still plenty powerful.

There are two new options for subscribers with the Ultra and Infinite monthly plans. Ultra starts at $25 a month, and is based on an RTX 2080 or equivalent card for a powerful gaming upgrade from the Boost model.

This gets the bump up to 4K gaming with Ray tracing instead of just 4K gaming, and it also bumps up RAM and storage. With the Ultra plan players get 16GB of RAM instead of 12GB, and storage goes up by double from 256GB to 512GB.

If you want to pay a little more you can have Shadow’s best of the best. The Infinite plan. This is $40 a month, and it comes with everything that the Ultra plan has and more. Including 32GB of RAM and 1TB of storage space.

Both the Ultra and Infinite plans can have storage upgraded as well. If you happen to need more than what’s already there. And given the size of some the newest games that are releasing, you might want all the storage you can get.

Ultra and Infinite tiers will start with a small rollout

If you’re eager to upgrade, we get it. The temptation to have all that powerful hardware for your cloud gaming setup is hard to ignore.

Unfortunately you may not get to access it right away. Shadow says it will begin the rollout of the two new tiers with its Chicago-based data center at the end of November. You’ll need to be close enough to that data center for it to be the one you’re connected to.

And where you live will determine whether or not you get that data center when you sign up. After Chicago, Shadow will open up the new tiers at its other data centers in Texas, California, and New York in the months that follow.

And it’ll be looking to roll out these tiers to its European data centers in 2021. 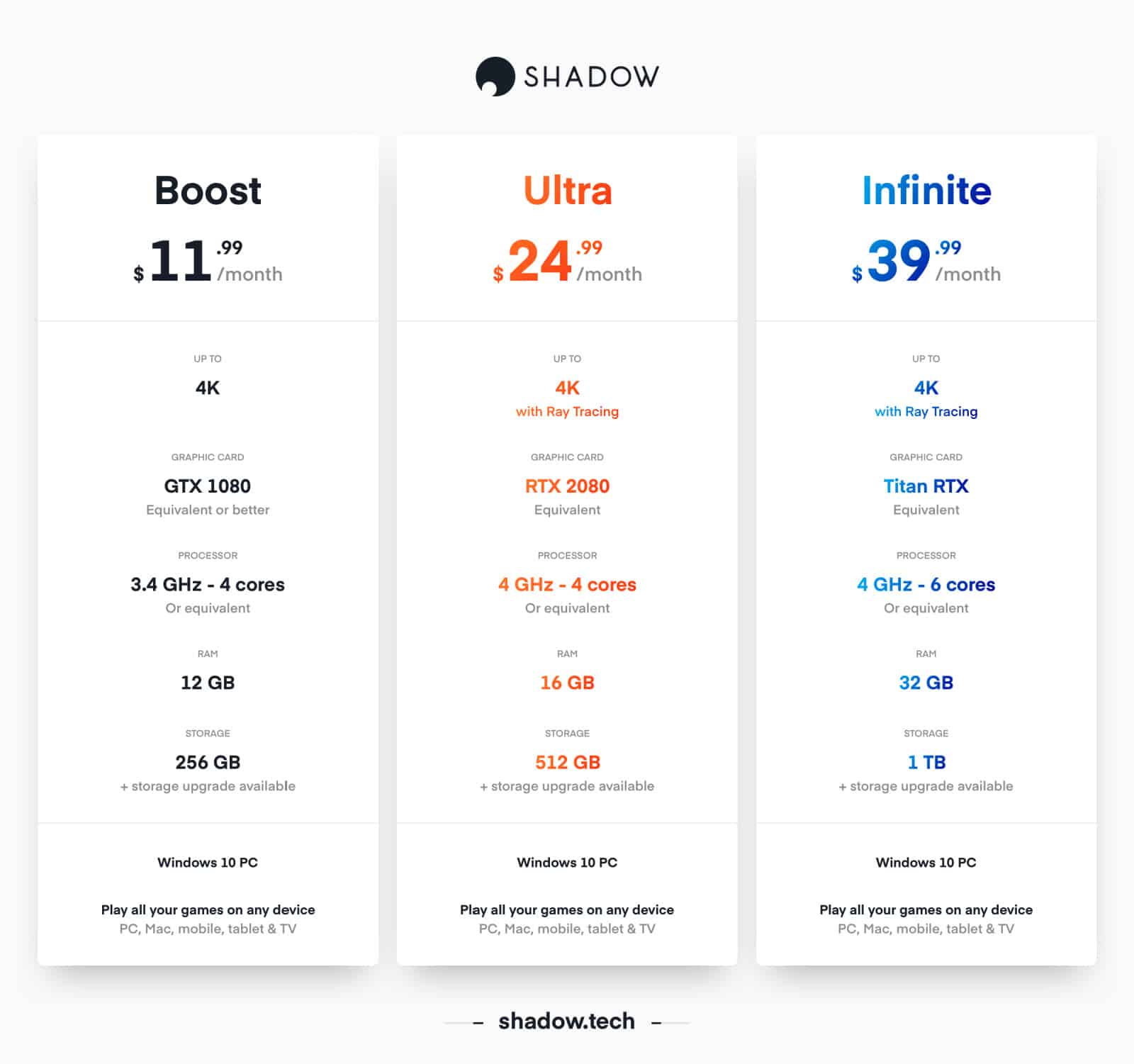