S Translator is the latest Samsung service to reach its end of life this year. The Korean company has announced that it will shut down its outdated language translation service on December 1, 2020. The company communicated the plans via a notice it has sent to users in South Korea.

Touted as Samsung’s answer to Google Translate and Microsoft Translator, S Translator was received well by Galaxy smartphone users early on. It offered voice recognition and text-to-speech features as well. However, the company stopped putting much effort into the service after the arrival of Bixby. It is now completely getting rid of S Translator in favor of the latter.

Samsung said that personal information collected from users would be deleted soon after the termination of the service. In the notice sent to users in South Korea, the company also thanked them for the continued support over the years.

Samsung to shut down S Translator

Samsung has shut down several in-house apps and services this year. Find My Car, Car Mode, MirrorLink, S Voice, and PlayGalaxy Link all reached their end of life in recent months. The latter, particularly, never even made it out of beta. Introduced with the Galaxy Note 10 last year, PlayGalaxy Link was a game streaming service that allowed Galaxy device owners to stream games from their PC to their mobile devices.

Find My Car, Care Mode, MirrorLink, and S Voice, meanwhile, were available for years but not anymore. Now S Translator will be joining them in Samsung’s trash can soon. The company perhaps wants Galaxy smartphone users to use Bixby to translate text between languages. Bixby is already much more efficient than the S Translator app and supports more languages as well.

However, Samsung’s Google Assistant and Alexa alternative lag behind the competition in this regard as well. Google Translate and Microsoft Translator, both of which are available for free on the Play Store, offer translation of more languages than Bixby. 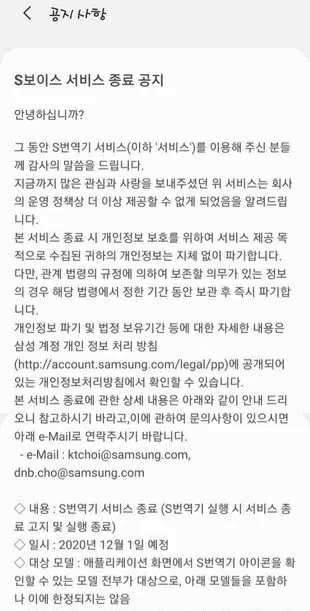