Samsung has officially unveiled the Exynos 1080 SoC. It is a premium mid-range chipset that will power the company’s next generation of high-end smartphones. Samsung will also offer its new processor to other OEMs. In fact, the Exynos 1080 will make its debut inside a Vivo flagship early next year.

Samsung had confirmed the existence of the Exynos 1080 processor last month. Several leaks and rumors over the past few weeks had also revealed a great deal about the new chipset. Now we have the official spec sheet and it confirms everything that was being reported.

The Exynos 1080 is Samsung’s first processor fabricated on a 5nm EUV-based FinFET process. So it should be extremely power-efficient as a 5nm process is said to shrink the chip size by 25 percent while making it 20 percent more power efficient as compared to the 7nm process.

CPU performance should also see a huge improvement thanks to the new ARM Cortex-A78 big cores. The octa-core chipset features a triple cluster arrangement with one Cortex-A78 core running at 2.8GHz while three other Cortex-A78 cores operate at a maximum frequency of 2.6GHz. The four power-efficient Cortex-A55 cores top up at 2.0GHz.

In terms of memory, the chipset supports LPDDR5/LPDDR4x RAM and UFS 3.1 storage. There’s an integrated neural processing unit (NPU) that can offer up to 5.7 TOPS (trillion operations per second) of performance. The integrated 5G modem, meanwhile, supports both sub-6GHz and mmWave networks, delivering theoretical downlink speeds of up to 3.67Gbps and 5.1Gbps respectively.

The Exynos 1080 packs an image signal processor (ISP) capable of handling up to six cameras with a maximum resolution of 200-megapixel, including two 32-megapixel cameras at the same time. The chipset is capable of 4k video recording and playback at 60fps (frames per second). It also supports on-device HDR 10+ video editing.

As mentioned earlier, the new Exynos processor will debut inside a Vivo smartphone. There are also reports of Xiaomi and OPPO partnering with Samsung for the Exynos 1080. However, there hasn’t been any such announcement yet. 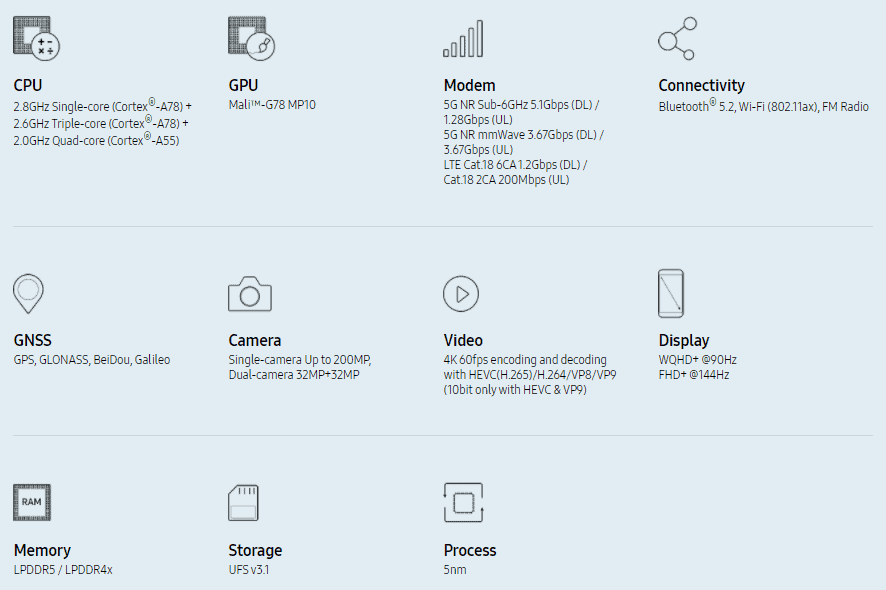