OPPO spinoff, Realme, has just broken the record of the fastest smartphone brand to hit 50 million cumulative shipments globally. Established in August 2018, the Chinese company achieved the feat in a little over two years since its inception.

According to research firm Counterpoint Research, Realme registered a whopping 132 percent quarter-on-quarter (QoQ) growth in shipments in Q3 2020. The past quarter saw the smartphone market slightly recover from the slowdown caused by the COVID-19 pandemic.

However, Realme’s feat is still highly appreciable given that global smartphone shipments in Q3 2020 grew by just 32 percent QoQ in Q3 2020. Xiaomi and Samsung saw 75 percent and 47 percent QoQ growth respectively during the same period. No other phone brand even reached the 40 percent mark at a time when Realme registered a 132 percent growth.

If we look at numbers from the same period last year, it shows even more impressive results for Realme. While the global market declined four percent year-on-year (YoY) to around 380 million units, the young Chinese company registered a 45-percent YoY growth. That growth is only bettered by Xiaomi’s 46-percent YoY increase in shipment.

Samsung, Motorola, and Tecno are the only other phone brands to see positive YoY growth in shipment in Q3 2020, although their two percent increase doesn’t make much significance. Vivo, OPPO, LG, and Apple, all saw a YoY decline in shipment this past quarter. 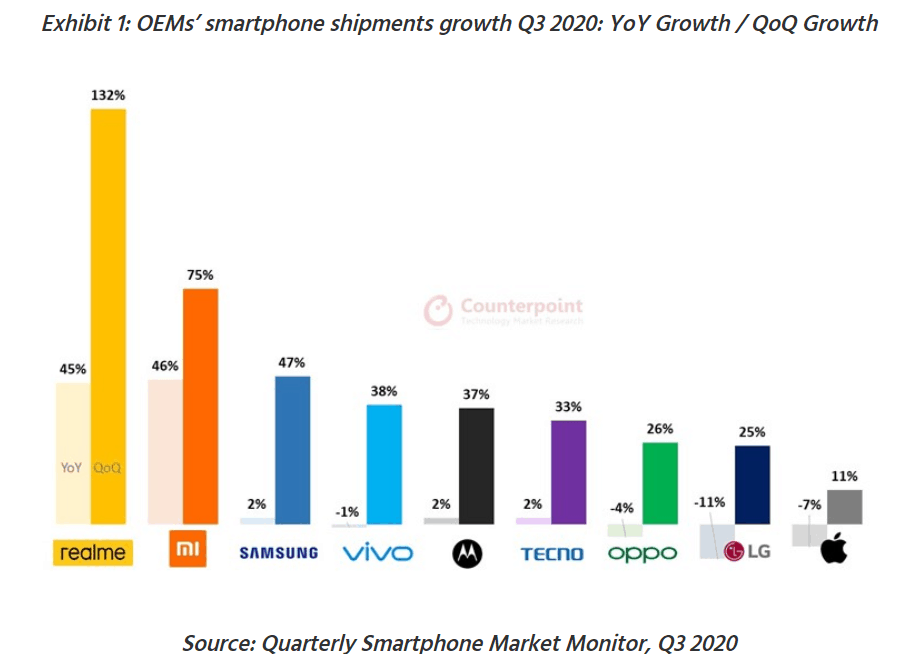 Since its inception in August 2018, Realme has been steadily expanding its reach globally. The company has been able to break into the top five smartphone brands list within a couple of quarters in every major market it has entered in the past two years. In markets like Spain, it entered the top-5 brands’ list within one month of launching.

Realme has held onto that strong growth momentum this year as well. In India, it grew 300 percent QoQ in Q3, grabbing the fourth spot with a 15 percent market share. The company also saw a strong, 196 percent YoY and 47 percent QoQ shipment growth in the Southeast Asia region. This helped the company solidify its top-5 position in several countries including the Philippines, Malaysia, Indonesia, Thailand, and Vietnam.

Clear enough, the idea of creating a youngster-focused, online-centric brand has worked wonderfully well for Realme. Going forward, the company is likely to invest in several next-gen technologies such as 5G and the AI+IoT ecosystem, while keeping the core business strategy intact.

Many of these products have been received well by consumers in markets like India. So we will likely see Realme expand their availability to more regions in the coming months and years. 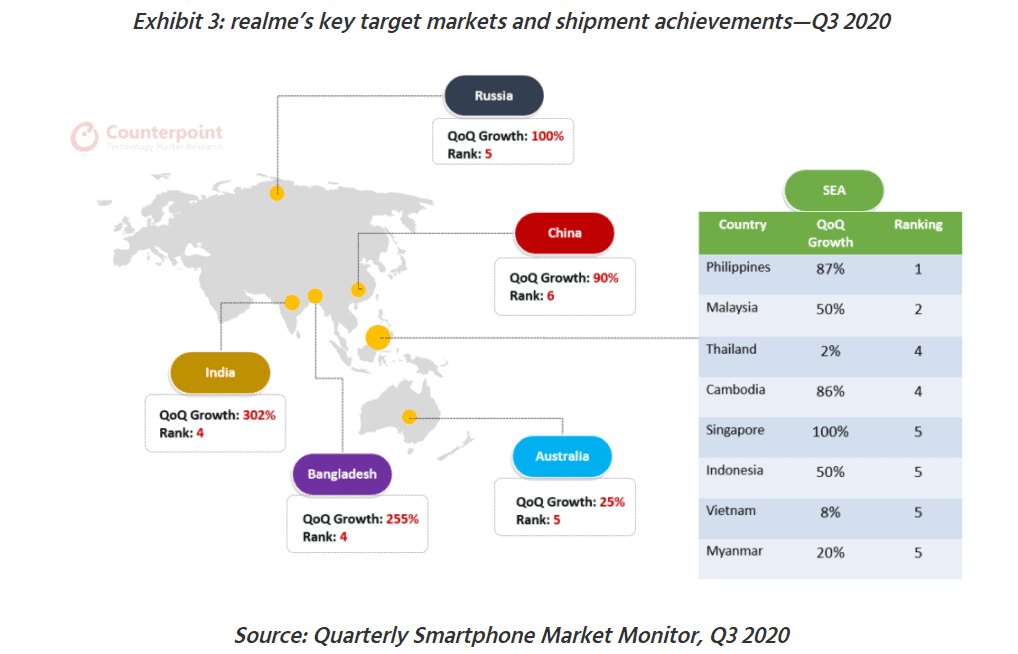