The year 2020 for OnePlus has been phenomenal. For the first time, we have seen the company venture in the mid-range segment with devices like OnePlus Nord, OnePlus Nord N100, and N10 5G.

And as per the official OnePlus forum post, the OnePlus Nord N100 is receiving a new Android 10 based OxygenOS 10.5.1 update. Notably, it brings several battery and camera improvements for the device.

The OnePlus Nord N100 is a decent purchase for the money. It comes powered with a Snapdragon 460 processor, which is coupled with 4GB of RAM. Under the hood, it comes with a 5,000 mAh battery with 18W fast charging support.

But there is one thing very important that this OnePlus Nord N100 misses out on. And that is the high refresh rate or fluid display. This feature is something that OnePlus officially announced back in 2019 that all the future OnePlus devices will come with a high refresh rate display.

OnePlus has already given their absurd clarification on this issue. It says that the statement was made in context to the company's flagship devices. But the actual statement clearly mentions "all devices" and there is no mention of the word "flagship".

Coming back to the new update for the recently released mid-ranger from OnePlus, it arrives with version OxygenOS 10.5.1. And it packs improvements for battery, camera, network, and Bluetooth.

More importantly, the update is rolling out for the OnePlus Nord N100 units in Europe. The update also optimizes the device's touch and interaction experience and improves system stability.

The update is purely incremental in nature and is hitting the users as a stable update. Moreover, it will be arriving via OTA in batches. Meaning that update will hit the devices for all the users gradually.

This OnePlus Nord N100 update is based on Android 10, which is the default OS that the device comes out of the box with. If the update has not reached your device, then you can manually check for it.

For that, you can head over to Settings >> System >> System Updates. If there is a new update available for your device, then you will be prompted to download the update.

As far as the Android 11 update is concerned, there is not much clarity as to when the OnePlus Nord devices will pick up the latest OS updates. For more info on the latest update, you can head here. 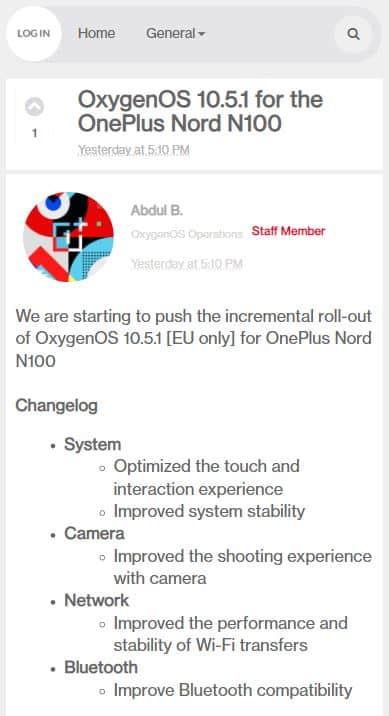