The new octa-core chipset has two Cortex-A76 cores running at up to 2.2GHz while the remaining six power-efficient Cortex-A55 cores are clocked at 2.0GHz. An ARM Mali-G57 MC2 GPU handles the graphics duties. It supports up to 12 GB of LPDDR4x RAM at 2133MHz and UFS 2.2 dual-lane storage with up to 1GB/s transfer speeds.

Since the Dimensity 700 is an entry-level chipset, it only supports up to 90Hz display refresh rates. In terms of display resolution, it can run Full HD+ (2520 x 1080) panels.

For photography, the new chipset can handle 48-megapixel or 64-megapixel cameras with support for features like AI-bokeh, AI-color, and AI-beauty. It offers hardware-based imaging accelerators such as multi-frame noise reduction for better low-light images with low noise.

It’s unclear when the first batch of Dimensity 700-powered devices would arrive in the market. MediaTek recently said that its 5G chips will be available globally from Q3 2020 but there hasn’t been much progress yet. 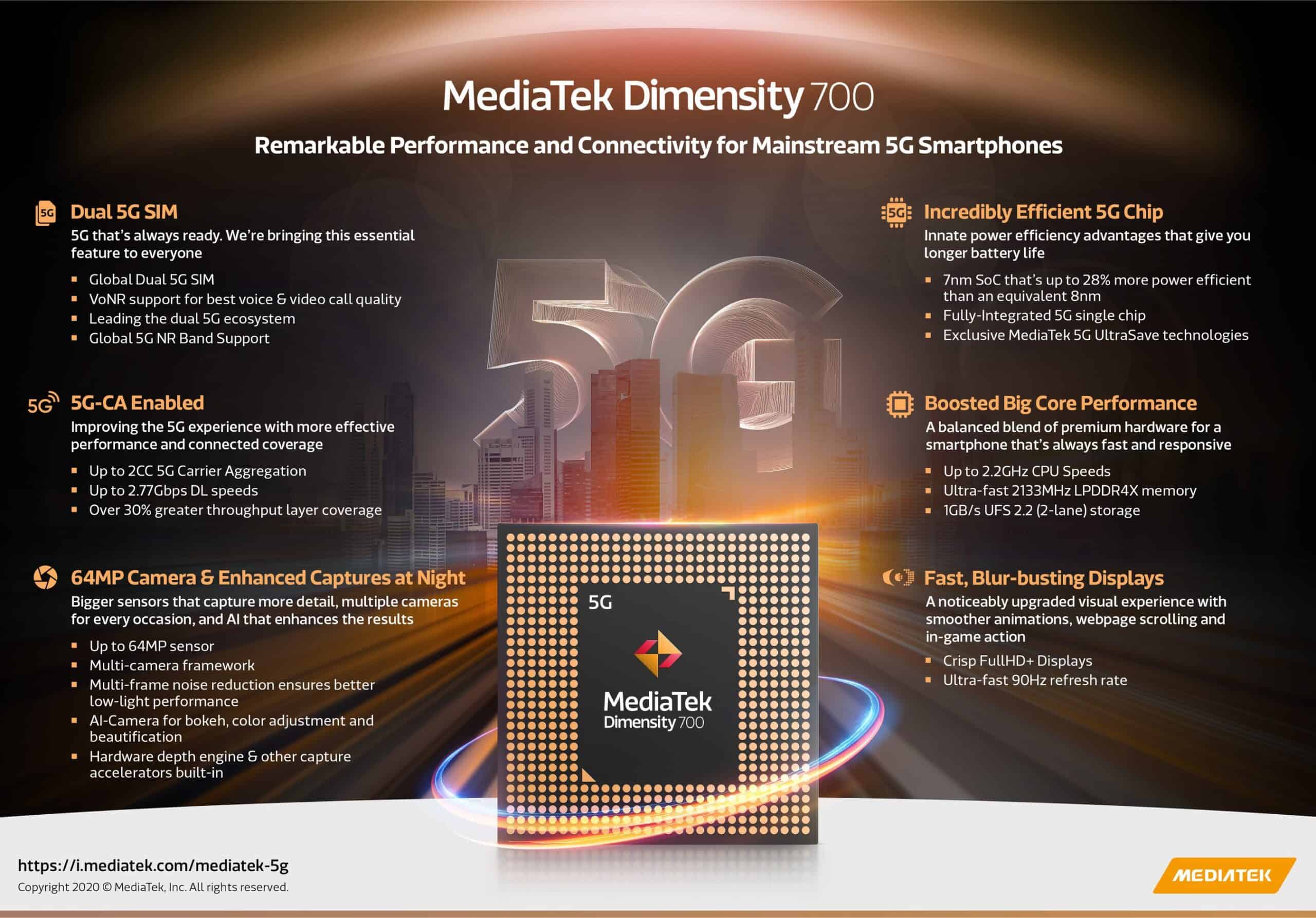 In addition to the new entry-level, Dimensity 700 5G chipset for smartphones, MediaTek also unveiled two new chipsets for next-generation Chromebooks – the MT8195 and MT8192. The MT8195 is a more premium offering of the two, fabricated on TSMC’s 6nm process.

The MT8192, on the other hand, is a 7nm chipset intended for more affordable Chromebooks. It features four ARM Cortex-A76 cores, which are two generations old now. It’s disappointing that MediaTek didn’t opt for the newer Cortex-A77 cores instead.

ARM has yet to launch a successor to the power-efficient Cortex-A55 cores, so they feature on this chipset as well. It also gets a slower APU in the form of APU 2.0, which tops up at 2.4 TOPS. However, it gets the same GPU as the MT8195, although it’s unclear if there’s any clock difference.

MediaTek says the MT8192 SoC will start making its way into Chromebooks in the second quarter of next year. The company has yet to specify when Chromebooks powered by the MT8195 will arrive in the market.