Google is working on a new Chromebook codenamed Zork. We first reported about the existence of this device back in April 2019. A year later in April this year, it was spotted on the benchmarking website Geekbench. That listing revealed a few details about this upcoming device. Now, this device has appeared on the Google Play Console, revealing its key specifications.

As per the listing, this Google ‘Zork’ Chromebook will get the AMD Ryzen 3 3250C chipset with two CPU cores running at a maximum frequency of 3.5GHz. The quad-thread chipset is paired with 4GB of RAM and a three-core Radeon Vega 3 GPU clocked at 1.2GHz. The device gets a Full HD display with a 1920 x 1080 pixels resolution and a pixel density of 160 DPI (dots per inch).

Speaking of the operating system, the Google Play Console listing for the device shows it will run Android 9. However, that’s highly unlikely for two main reasons. Firstly, the device runs on an AMD processor and we know that Android devices are not powered by AMD processors, at least for now.

Also, the Zork name has been associated with a Chrome OS device from the very beginning. Even in this very listing, the device is labeled a Chromebook. There already exist Chromebooks running on the AMD Ryzen 3 3250C processor, such as the recently announced HP Pro Chromebook c645. This Zork device should be joining them in the near future.

Interestingly, the Geekbench listing earlier this year also said the device will run Android 9. But benchmarks are easy to manipulate, so you should always take that information with a pinch of salt.

The Google Play Console listing also features a render of the device. However, it’s likely a placeholder image and not the actual Google Zork Chromebook.

The Geekbench listing had also shown a second variant of this device with the AMD Ryzen 7 3700C processor. This chipset has four CPU cores and eight threads. This variant also gets 8GB of RAM and the Radeon Vega Mobile GFX graphics, suggesting that it’ll be a more premium model of the two.

However, the otherwise humble spec sheet suggests this Zork Chromebook will still be a budget offering from Google. It now remains to be seen whether Google will launch this device under its Pixelbook series or will create a separate series of affordable Chromebooks. Now that it has appeared on the Google Play Console, an official announcement should not be too far away. We might start to hear more about it in the coming weeks and months. 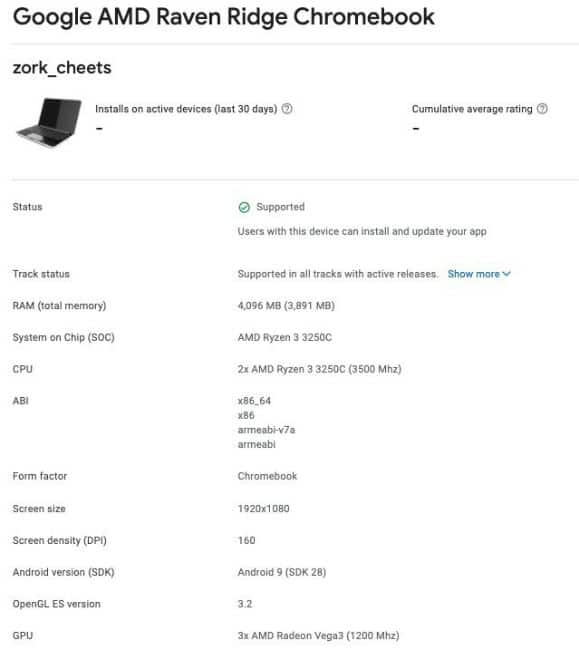