Samsung recently introduced a new Galaxy F series to its already crowded budget and mid-range smartphone lineup. The Galaxy F41 launched last month as the first model in the series. Reports about a second Galaxy F device with the model number SM-F127G emerged a couple of weeks back. We now have live images of the purported back panel for this phone, which might launch as the Galaxy F12.

The leaked images reveal a change in design language for Samsung's mid-rangers. Firstly, the back panel comes in a textured finish. Most of the existing Galaxy M series and Galaxy A series devices, as well as the Galaxy F41, come in a matte finish on a plastic/glasstic back.

Additionally, the back panel has cutouts for a quad-camera setup with an LED flash. What's interesting here is that the camera housing here is a square one. That's another change from vertical camera modules we are used to seeing on Samsung phones. There's no report yet on the spec details of the camera sensors for the Galaxy F12.

The bottom edge of the phone has cutouts for a 3.5mm headphone jack, a microphone, a USB Type-C charging port, and a single, down-firing speaker. Cutouts for volume rockers and the power button can be seen on the right edge while the SIM tray sits on the left. There's seemingly a second microphone at the top as well. Typical Samsung stuff here.

Interestingly, there's no room for a capacitive fingerprint sensor on the back of this phone. It appears Samsung will embed a fingerprint scanner to the power button itself, as the cutout for it seems to be slightly wider than normal.

The removal of the fingerprint scanner from the back of the phone may have something to do with its battery capacity. The report claims that this phone will pack a massive 7,000mAh battery. The Galaxy M51 also arrived with a 7,000mAh battery a couple of months back.

The leaked Galaxy F12 may be a rebadged Galaxy M12

If you look closely at the image below, the model numbers M127F/F127G are etched on this leaked back panel for the Galaxy F12. By the looks of it, the new Galaxy F device will be a rebadged Galaxy M12. That said, the Galaxy M12 itself has yet to launch. Perhaps the two are the same device barring some missing features on one of them.

Samsung has already done that with the first Galaxy F phone. The newly launched Galaxy F41 is nothing but a rebadged Galaxy M31 with a few missing features. This may well be the company's strategy with the Galaxy F series – to launch lower-cost versions of its popular Galaxy M phones by removing a few lesser-used features.

Detailed specs of the Galaxy F12/Galaxy M12 are still a mystery. However, the device is reportedly already in development at Samsung's facility in India. So it shouldn't be long before more details about this phone start popping up on the internet. Also, be prepared to see more Galaxy F phones going forward as Samsung begins its latest onslaught on the low-cost smartphone market. 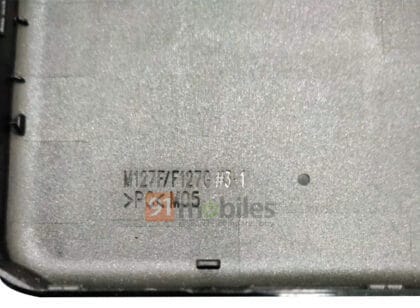