The Samsung Galaxy A-series smartphones are quite popular in the budget segment. According to the latest report from Canalys, the Galaxy A21s was the best-selling Android smartphone in the third quarter of 2020. Notably, Samsung has secured five spots in the world’s top 10 shipping smartphones.

Furthermore, the South Korean-giant reclaimed its No.1 spot in the smartphone market by registering a 2% year-on-year (Y-o-Y) growth. The company managed to do that even when global smartphone shipments declined by 1% Y-o-Y during the same period. Overall, the Galaxy A21s comes in third place among all smartphones shipped in the last quarter.

With slightly lower sales, the low-cost Galaxy A11 occupied the fourth position. The Galaxy A51, the best-selling Android smartphone in the first quarter, has slipped to fifth place in the third quarter. Interestingly, the Galaxy A51 is also the most premium smartphone out of all the top five best-selling Samsung smartphones.

The affordable iPhone SE 2020 comes in the second position. Apart from Apple and Samsung, Xiaomi is the only other smartphone manufacturer to make it to the top 10 list. The low-cost Redmi Note 9, Redmi 9, and Redmi 9A came at sixth, seventh, and ninth positions respectively.

The coronavirus pandemic might have forced customers to opt for lower-priced devices. In the first half of this year, the Samsung Galaxy S20+ 5G became the best-selling 5G smartphone in the world. Now though, the newly launched Galaxy S20 FE might help the company continue to grow in the 5G segment.

Samsung will reportedly launch its Galaxy S21 series earlier than expected. As per the leaks, the company will unveil these new 2021 flagship smartphones in mid-January and start selling them by the end of that month. Still, we might continue to see budget smartphones topping the best selling smartphones list for the foreseeable future. 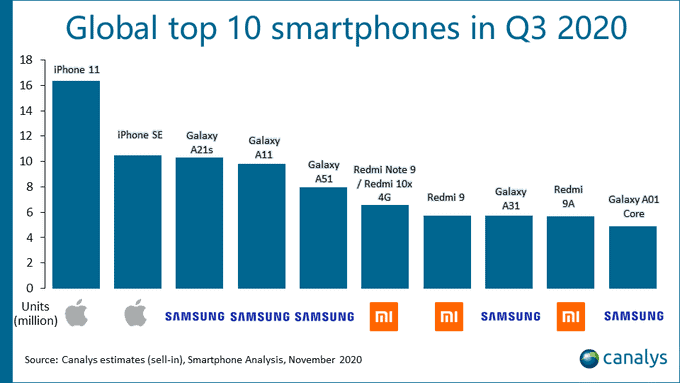