During question from the Senate Facebook CEO Mark Zuckerberg faced a grilling about a tracking tool called Centra. As reported by Input Mag, this tool is used by Facebook for tracking its users across the internet.

The Senate hearing mostly focused on free speech and Facebook's censorship of content. Generally concerning the silencing of conservative voices in the fallout of the presidential election. This is a balance Facebook has struggled to strike in recent months. Republicans have concerns about too much censorship whilst Democrats feel Facebook has not gone far enough.

However, this tracking tool is something that has the potential to only add to the woes Facebook currently faces. The company looks as if it is likely to face an antitrust lawsuit from the FTC. This follows a number of supposed breaches throughout the year.

Senator John Hawley claimed to have obtained a picture of the aforementioned tool which is featured below. If true it shows just how many data points Facebook has on users. It also shows how difficult it is to escape the company's tracking tools. 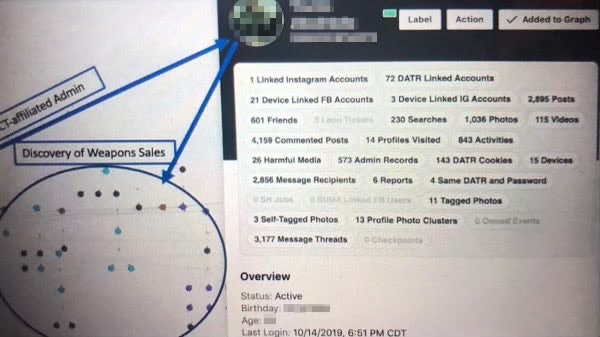 Facebook's tracking tool comes to the fore during hearing

In label visible states "3 Device Linked IG Accounts". This means Facebook can log the same user's activity on a device even if they switch accounts. This even works if the user uses hardware identifiers, like a smartphone's fixed IMEI number.

Previously it emerged that Facebook uses browser cookies to track people without accounts on the platform. It creates "shadow profiles" in the hope they may create an account in the future. This all just underscores just how intrusive these tools are.

It is worth noting that Facebook is by no means alone in this sort of tracking. Pretty much the whole online advertising industry is built on this sort of stuff.

Critics claim that users may be happy to exchange their data for free services. However, the extent of this tracking is so vast and complex the average person is unable to comprehend just what is going on.

Apple has responded to these issues by requiring apps to request permission before users can use an app identifier. This sort of change has large financial ramifications as many apps monetize through Facebook ads. Zuckerberg has claimed that losing this sort of data could wipe out billions in revenue.

The fundamental concern for critics is that users data can get into the wrong hands regardless of Facebook's intentions. US data laws are hardly strict allowing these companies to get away with a lot. Until these tighten up expect social media companies to continue to take advantage of your data in similar ways.