It’s no secret that Huawei‘s smartphone business is under threat because of the US sanctions. The effects of those restrictions have now started to show up in the company’s sales figures. After briefly overtaking Samsung as the world’s largest smartphone vendor in April, when lockdown measures against the COVID-19 pandemic had hampered Samsung’s sales, the beleaguered Chinese giant is now falling steeply down the ladder.

According to a recent report by market research firm Counterpoint Research, Huawei’s global smartphone market share fell to 16 percent in August. The company had captured 21 percent of the market in April. The firm estimates Huawei’s sales to fall further in the future, as the Trump administration tightens its grip on the company.

Samsung, on the other hand, saw its market share increase from 20 percent in April to 22 percent in August. The South Korean conglomerate is now back holding that No. 1 crown it has held for years. Apple’s market share remained unchanged at 12 percent, as it was largely an off-season period for the iPhone maker.

Samsung’s growth was pretty much expected given its sheer global brand value. But it’s Xiaomi that’s benefitting significantly from Huawei’s unfortunate situation. The Chinese company was the fourth-largest global smartphone maker in August this year, following Samsung, Huawei, and Apple. Its market share grew from eight percent in April to 11 percent in August.

According to the report, Xiaomi is making big inroads in markets where Huawei had a strong presence. The company is showing a significant increase in markets such as Central Eastern Europe.

Huawei’s steep decline doesn’t come as a surprise. A string of US-imposed restrictions has paralyzed the Chinese company to an extent that the immediate survival of its smartphone business is now under threat. The Mate 40 series could well be the last big Huawei smartphone launch unless some major changes happen over the next few months.

The global smartphone business could see double-digit growth in 2021 after slow sales this year. However, analysts expect the opposite for Huawei. According to a DigiTimes Research report earlier this month, the company that was at the very top a few months ago could fall all the way down to the seventh spot next year.

Counterpoint Research expects the US sanctions on Huawei to help existing big companies more, rather than paving way for new entrants to make inroads. “Geopolitical policies and political affairs among nations are affecting the smartphone market in many ways. There will be heightened marketing activity to seize opportunities in these regions and segments. As a result, the concentration of top players in the smartphone market will be much stronger. We see players like Samsung, Apple, Xiaomi and OPPO benefiting the most,” said analyst Minsoo Kang in a press release. 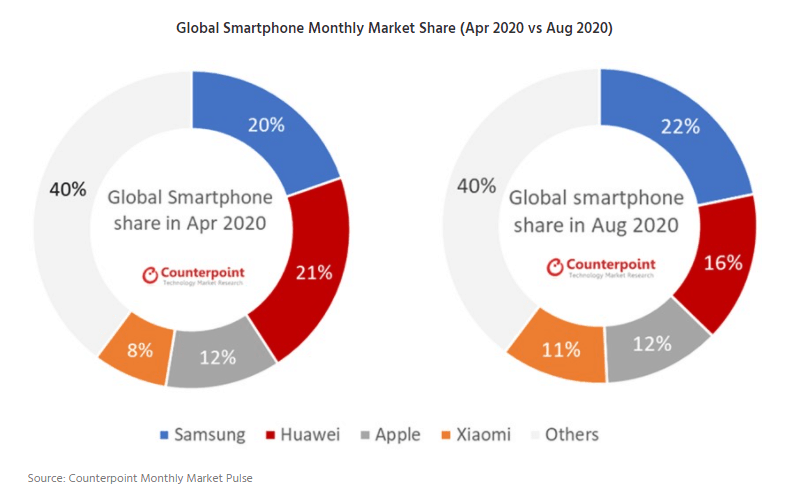