In early 2019, Xiaomi showcased a foldable phone prototype with a double-folding design. While the company is yet to launch a foldable smartphone, it has patented several foldable designs over the years. According to LetsGoDigital, Xiaomi’s latest patent filed with the CNIPA (China National Intellectual Property Administration) reveals a unique take on foldable smartphones.

The company filed for the patent in April this year, it was approved earlier today i.e October 23. The documentation clearly describes the phone to come with an in-folding design. It looks similar to the recently launched Samsung Galaxy Fold 2. For the outer cover display, the company has added a sliding mechanism to hide the earpiece and front cameras.

However, this is not the first time Xiaomi will be using slider design on its smartphone. The Mi MIX3 launched in 2018 came with a magnetic slider to offer a full-screen experience by hiding the cameras, earpiece, and other sensors behind the display. In this new patent, the company is using the same magnetic slider for the secondary display on the outside.

With the recently launched Galaxy Fold 2, Samsung also offered an edge to edge cover display. However, it has opted for a punch-hole cutout for the front camera. At the moment, the sliding display on foldable smartphones looks like overkill. That too, when the under-display camera technology looks to take center stage as early as next year.

The company to reportedly launch its first foldable smartphone in 2021

It remains to be seen whether the company will ever launch a foldable smartphone with this design. Speaking of the other design aspects, the large rectangular camera setup on the rear features a total of four camera sensors. The rear camera setup looks quite similar to the Mi 10 Ultra.

There seem to be dual selfie cameras behind the sliding cover display on this Xiaomi foldable phone. Users can slide down the display for capturing selfies or making video calls. Unlike Samsung, Xiaomi decided to skip offering any cameras on the inside. Both the power button and volume rocker are located on the right edge of the device.

On the bottom edge, there is a USB-C port and a loudspeaker. As per the recent patent, Xiaomi is also working on a couple more foldable smartphone designs. Going by the company’s reputation, its first foldable smartphone should also be the cheapest among the competition.

To date, there is no word from Xiaomi about the possible launch date of its first-even foldable smartphone. However, the leaks from China suggest it could happen in the first half of 2021. 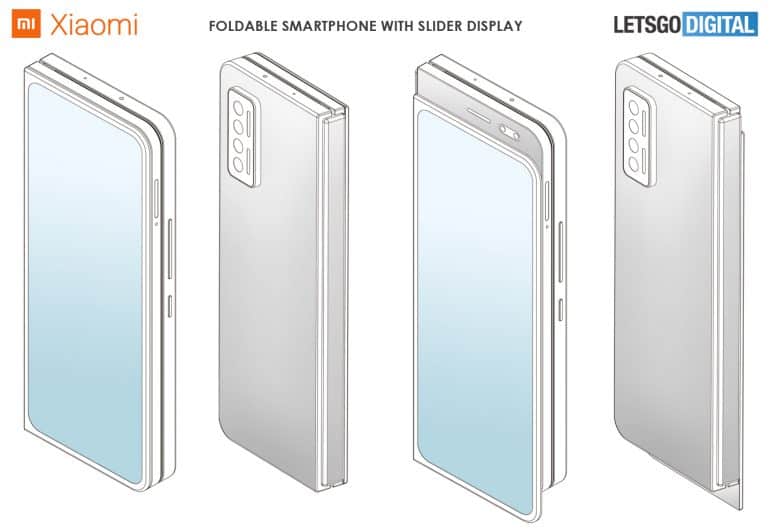