Teracube 2e is the latest offering from Teracube, a Redmond, WA based company. After launching the initial Teracube on Kickstarter in 2019, the company is back again with an even more affordable smartphone.

Teracube 2e is launching today with a limited-launch price of $99! How can a company offer a smartphone with a 4-year warranty and 3 years guaranteed OS/security patch updates for such a low price?

Before we dissect the price, let's get a few things out of the way. $99 is a limited-launch price for the initial batch of devices, MSRP is $199. And this smartphone is most definitely not your typical flagship 5G phone with all the bells and whistles. It is primarily targeted at the affordable smartphone category with a price point of around $200 or less.

The sub $200 smartphone shipments increased by 200% in the Covid-19 era. This statistic comes from MWC data, according to Sharad Mittal, a co-founder of Teracube. For people purchasing devices in the sub-$200 price category, price is a big factor in their overall decision.

Can the Teracube 2e be affordable and sustainable?

With this affordable smartphone which the company calls it "Better for your pocket, better for the planet" they are trying to entice more users compared to the folks who supported them via Kickstarter and Indiegogo last year. So let's take a little bit of a deeper dive to figure out just how sustainable is the 2e compared to your average smartphone.

It starts with the packaging in which the phone arrives at your doorstep. The packaging uses approximately 50% fewer materials compared to other smartphones. They achieve it via the elimination of a charger brick, cable, and earphones which the company claims most people already have.  Teracube includes a 100% biodegradable case for free in the box. The company claims this offsets the cost of the accessories they eliminated in the box. Isn't this the logic touted by a certain company based in Cupertino, CA for improving their environmental footprint? 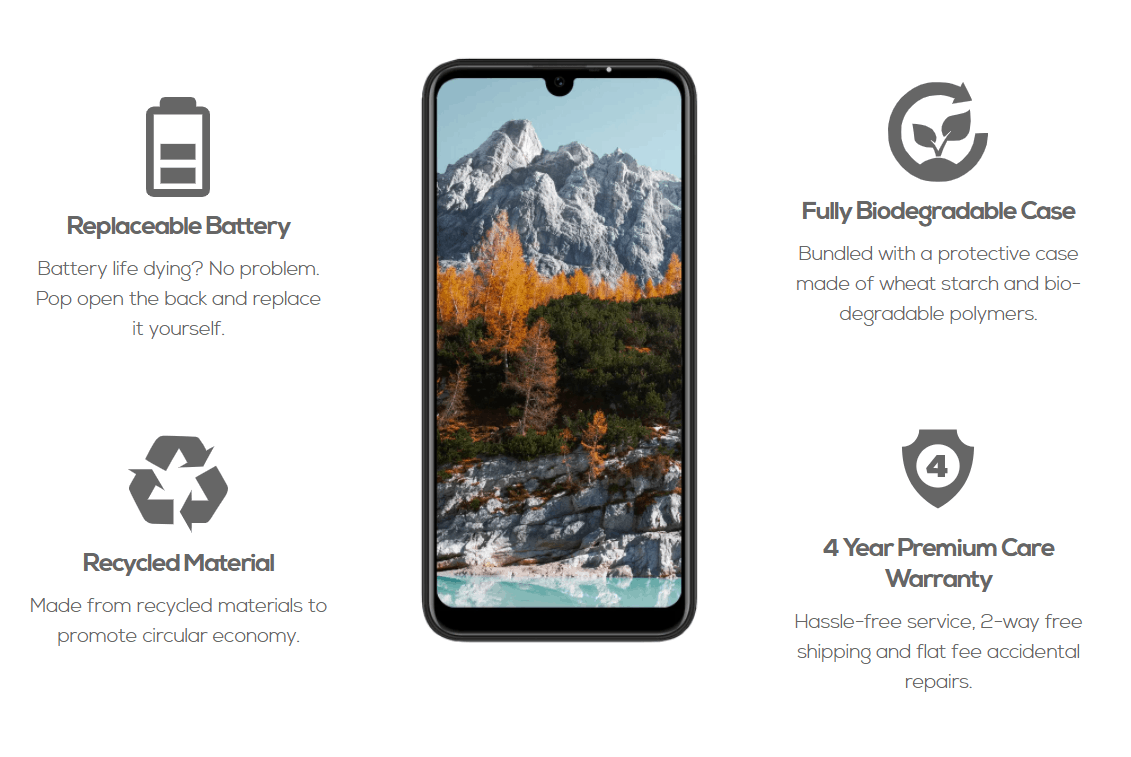 Teracube is banking on its 4-year hassle-free warranty to encourage people to keep using their phone way past the normal 2 years. In case the phone needs repairs due to an accidental drop or for other reasons they offer a $59 flat-fee repair in the USA. Usually, if a sub-$200 smartphone suffers damage most folks just get a replacement smartphone as the cost of fixing can sometimes be equal to the cost of a new device. The damaged device just ends up in the growing pile of e-waste.

How does the flat fee repair program work?

You open a case with customer service and have a factory-certified replacement phone shipped to a UPS store. Shipping time is likely to be within 2 to 5 business days (depending on your location in the USA). You can then walk into one of the approximately 5000 UPS stores to pick up your replacement device and send the old one back without any paperwork. Alternately you can provide a refundable security deposit and they will mail you a replacement device at your address. Once Teracube gets the device, they will issue a refund of your deposit. The refundable deposit amount is not available currently.

The device that you send in for repairs gets fixed and then goes into the factory-certified device pool. Another user who may need a replacement device then gets a device shipped out of this pool. In either scenario for receiving the replacement device, the customer has their original phone in hand which may be advantageous in certain scenarios.

Why an affordable device versus a mid-tier smartphone?

So why did Teracube decide to launch a new device even cheaper than their previous device? According to Sharad Mittal, they received tons of feedback from their supporters. The two standout requests were – a replaceable battery and a cheaper repairable device. They achieved both by using a slightly lower-end Helio A25 processor, and 25% recycled plastics. They also reduced packaging and got rid of the accessories in the box.

So what are the specs of the Teracube 2e?

Teracube still kept things like a 6.1" HD+ display, good screen to body ratio, and stock Android 10. They included a replaceable 4000 mAh battery, 4GB RAM, and 64GB storage. The phone is dual-SIM and has a micro SD card slot. Really cheap smartphones tend to have less RAM and Storage compared to the 2e.

Additionally, cheap phones rarely get one OS update and not many security patches past one year. Teracube promises 4 years of OS/security patch updates. According to co-founder Anthony Tsim, they did internal tests with a lot of older devices. In testing, they ran regular mail, text, social media apps on older devices which performed just fine. The main issue they noticed was that the device struggled to switch between apps. The 4GB RAM in the 2e, they believe that the 2e will work like normal four years down the line. They also believe that app developers will pay attention to the needs of this growing market segment with lean or lite versions of their apps.

On what network will the 2e work?

Teracube 2e is trying to build on the success of the initial device which they claim to have sold "thousands of units". The 2e will work with T-Mobile and it's MVNOs at launch. Teracube is still trying to see if the 2e with play nice with AT&T's network. No word on any carrier deals at the time of launch.

Would you consider the 2e as your next smartphone?

Will the Teracube 2e change the disposable nature of electronic gadgets? Would you be willing to try out a smartphone that promises to be better for the environment and for your wallet? The pre-order link is now live on Indiegogo.

Keep an eye out on AndroidHeadlines for our full review of the Teracube 2e!

Advertisement
Advertisement
Trusted By Millions
Independent, Expert Android News You Can Trust, Since 2010
Publishing More Android Than Anyone Else
36
Today
193
This Week
693
This Month.
8131
This Year
109603
All Time
Advertisement