Skip to content
Advertisement
Trusted By Millions
Independent, Expert Android News You Can Trust, Since 2010
Publishing More Android Than Anyone Else
20
Today
20
This Week
518
This Month
4538
This Year
114567
All Time
Advertisement Samsung will reportedly launch the Galaxy S21 (or Galaxy S30?) smartphones a month earlier than usual. Over the last few weeks, there have been several leaks about these upcoming flagship smartphones. According to LetsGoDigital, Samsung has trademarked the name “Blade Bezel” in its home country of South Korea.

The company filed the trademark with the KIPO (Korean Intellectual Property Office) on October 16. It is categorized as Class 9, which includes large screen display, smartphone display, digital camera display, and more.

The trademark doesn’t reveal much information about the Galaxy S21’s display. All three smartphones in the Galaxy S21 series will feature bezels that are of equal thickness on all sides. This is according to an earlier report.

The Galaxy S21 and Galaxy S21+ are mentioned to sport flat panel screens. Speaking of the Ultra moniker, it will continue to feature a curved screen. Even the recently launched Galaxy Note 20 and Galaxy S20 FE smartphones also came with flat panel displays.

The company will bring down the bottom chin to minimum thickness

Samsung managed to trim down the bezels on the side and top to a minimum with the current-gen Galaxy flagship smartphones. Whereas, the bottom chin is barely thicker in comparison. Going by the leaks, Samsung might be able to bring the bottom chin’s thickness to the same as side bezels.

Based on the leaks, the design of the Galaxy S21 series will resemble the new iPhones with sharp edges and a flat display. Even the Galaxy Tab S7 and Galaxy Tab S7+ launched alongside the Galaxy Note 20 series came with the same boxy design.

Moreover, trademark categories also included digital camera display suggesting it might come with an under-display camera. While the company was initially rumored to introduce its under-display camera technology with the Galaxy S21 series, recent leaks have revealed that the technology is not yet mature enough to make a commercial debut.

Recently leaked renders reveal the Galaxy S21 to feature a redesigned rear camera module. Though there is no official confirmation, the camera bump should be minimal on these upcoming smartphones.

As usual, all three smartphones will come powered by the flagship Qualcomm Snapdragon 875 chipset in the US, China, and South Korea. In the other markets, the company will be using its upcoming flagship Exynos 2100 chipset. Stay tuned as more leaks will be popping up soon. 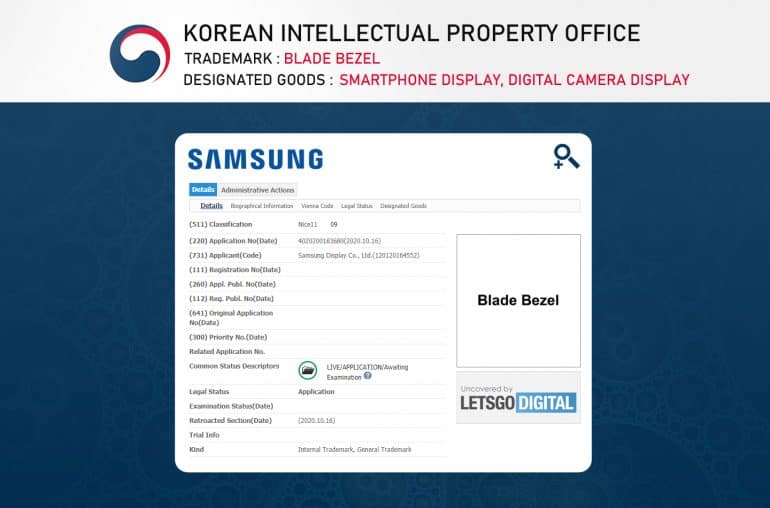