While the company applied for the patent in April this year, it only got approved on October 22. This newly patented design offers full-screen experience on a foldable smartphone with no notch or punch-hole cut-out. One of the designs included in the documentation reveals three pop-up cameras and three regular rear-facing cameras.

In the other design, the same pop-up camera module seems to sport all the six camera sensors. Compared to the first-gen Galaxy Fold, the new Galaxy Z Fold 2 with punch-hole cameras offers a better screen-to-body ratio for an enhanced visual experience.

Since the under-display camera technology is yet to be perfected for commercial usage, Samsung might go for pop-up cameras for the next year’s Galaxy Z Fold 3 smartphone. The company is also looking to add 3D depth-sensing technology using a DOT projector.

Though there are few smartphones with a pop-up camera offered face unlock option, it is not practical to use this camera system for secure face unlock. Instead, using the fingerprint scanner will be a much faster and more efficient way to unlock the device.

Will the next-gen Galaxy Z Fold 3 comes with this design?

If you didn’t know, the Galaxy A80 launched in April 2019 is currently the only Samsung smartphone to come with a pop-up camera. Moreover, the same camera sensors can also rotate to use as the front and rear cameras.

As shown in the renders, the company is using different sensors for the front and rear cameras. The next-gen Galaxy Z Fold smartphone will make its debut in the second half of 2021. Since these are just design patents, there is no guarantee that the company will be lancing its upcoming smartphones with these designs.

Recently, the company also patented the foldable phone design with a cut-out on the top corner of the display. However, the new pop-up camera design looks refined in comparison. In the coming weeks, Huawei might also launch Galaxy Z Fold 2-like in-folding foldable smartphone. 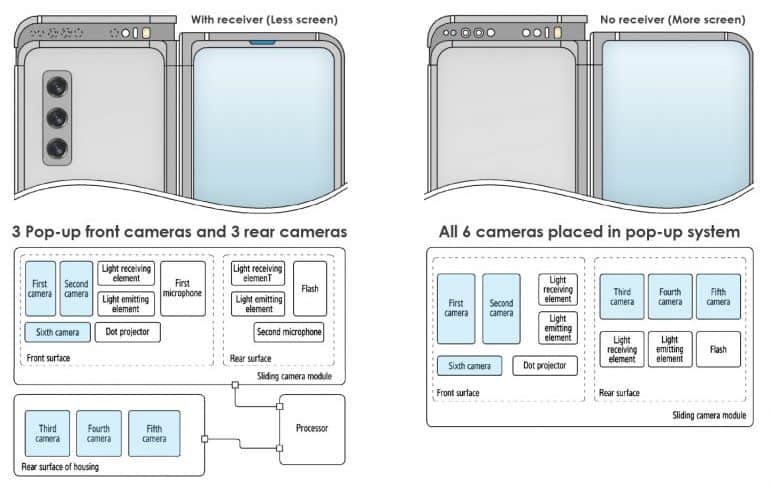