Skip to content
Advertisement
Trusted By Millions
Independent, Expert Android News You Can Trust, Since 2010
Publishing More Android Than Anyone Else
29
Today
231
This Week
76
This Month
7445
This Year
117400
All Time
Advertisement Samsung today, in an official press room release, unveiled its most affordable 5G smartphone, called the Galaxy A42 5G. The phone has tons of features and decent specs under the hood.

Samsung has been on a roll this year, with the release of new smartphones. We have got Galaxy S20 series, Note 20 series, Galaxy Z Flip, Galaxy Z Fold 2, and tons of mid-rangers in between all of this.

And now, as per new reports, Samsung has taken the wraps off its latest device, the Galaxy A42 5G. The phone has multiple cameras, a fast-charging battery, infinity-U display, and on top of that, 5G support.

Basically, it covers its bases alongside being a 5G phone. This is something that users expect out of a Galaxy A series phone. Samsung has been committed to bringing next-gen connectivity devices to its users and hence, the Galaxy A42 5G.

The Samsung Galaxy A42 5G would offer high-speed downloading and gaming experience with its 5G support. This would ensure less lag and peak performance.

It comes with a 6.6-inch HD+ Super AMOLED Infinity-U Display. Under the hood, it packs a 5,000 mAh battery which is enough to give you keep you running throughout the day.

The rear of the device has a premium finish and layered pattern to give it a modern feel. The rounded edges on the Galaxy A42 5G make it comfortable to hold in the hands.

Notably, the phone is powered by a Snapdragon 750G 5G chipset.  It is paired with 4GB of RAM and 128GB of internal storage. Moreover, the storage can be expanded up to 1TB via microSD.

There is only a single option available for the Galaxy A42 5G, i.e. 4GB+128GB. The fingerprint scanner is embedded under the display of the screen.

Galaxy A42 5G supports 15W fast charging via Type-C cable. The camera on the phone has a quad-camera setup. The primary lens on the phone is 48-megapixel.

The ultrawide lens is 8-megapixel, while the macro and depth camera is 5-megapixel each. Besides this, there is a 20-megapixel front-facing camera for sharp selfies. Connectivity options include WiFi, Bluetooth, USB Type-C port, and Samsung Pay.

For those who are intrigued by this Galaxy A42 5G, it will go on sale from November 6th in the United Kingdom. And will be priced at £349.

Besides, we expect the phone to arrive in other regions soon. For more information about the device, you can head over to the official website for details. 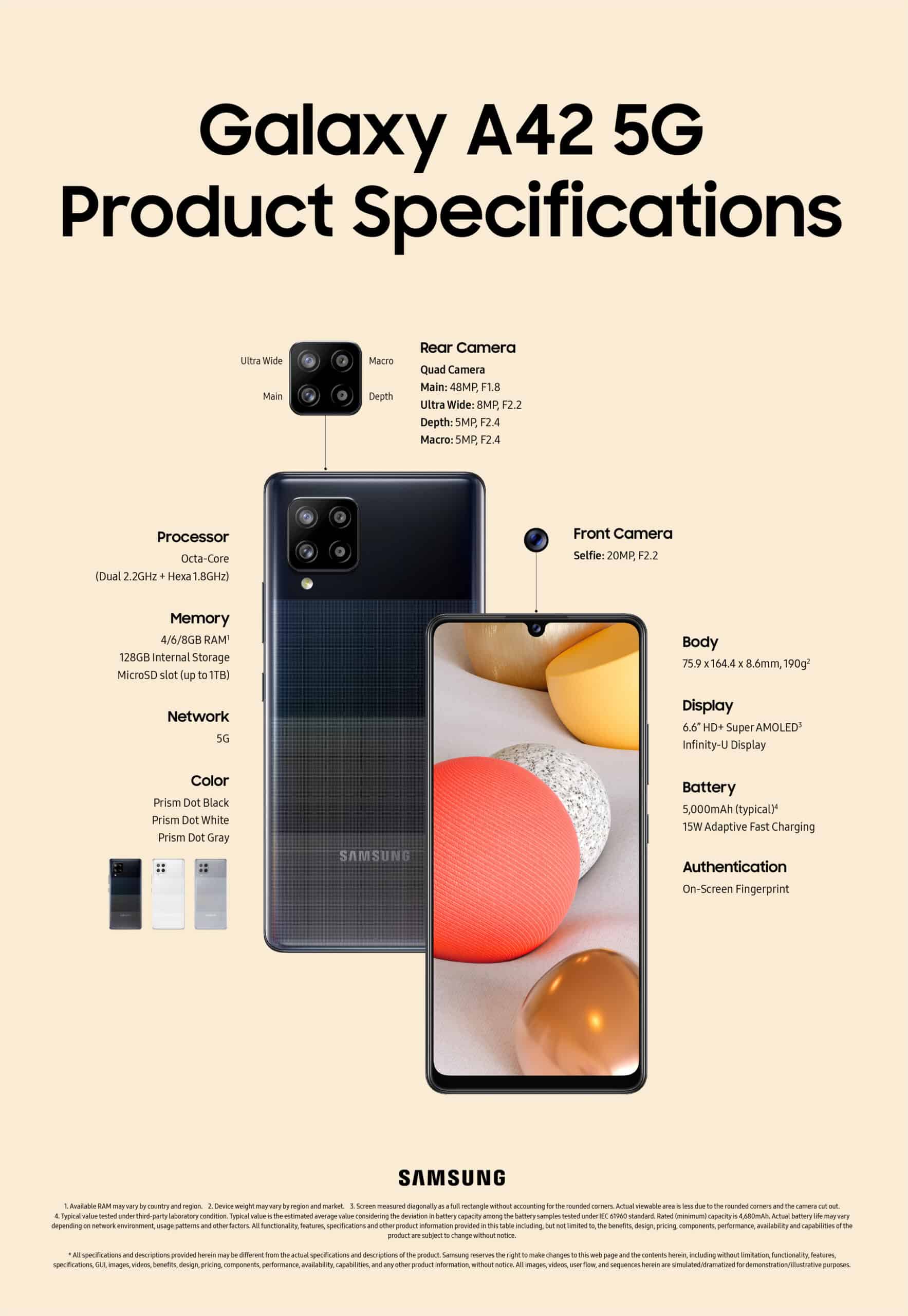