The Samsung Galaxy S20 was the world’s best selling 5G smartphone series in the first half of 2020. In terms of revenue from 5G smartphones, the Galaxy S20+ 5G became the no.1 bestseller worldwide in the same period, Strategy Analytics revealed in its new report.

All three smartphones in the Galaxy S20 series combinedly accounted for 22 percent of the overall revenue in H1 2020. However, this is only for the revenues generated from 5G smartphone sales. The Galaxy S20+ ranks first with a 9% share of all 5G smartphone revenues.

Moreover, the Galaxy S20 Ultra 5G and Galaxy S20 5G comes in second and third place, with 8% and 5% respectively. The P40 Pro 5G and Mate 30 5G from Huawei are the fourth and fifth bestselling 5G smartphones. Both the Huawei smartphones are the top-selling 5G flagship smartphones in China, the world’s largest 5G market.

With the US sanctions, Huawei was forced to sell its smartphones without Google Mobile Services (GMS) support even outside of China. Though the device came with top-notch hardware, the lack of software support made them inferior among the competition.

The loss in Huawei’s market share report also made it evident that it’s tough to sell smartphones without GMS support outside of its home country. In the first half of this year, the overall revenues from 5G smartphones hit an all-time high of $34 billion. As per the report, the newly launched Apple iPhone 12 will likely top the chart in the second half of this year.

Affordable smartphones to fuel Samsung’s growth in the 5G segment

Since the affordable smartphones are sold with low margins, there is not even a single low-cost 5G smartphone in the top 5 list. During the last few months, we have also witnessed several 5G smartphone launches in the mid-range category. Samsung might launch a wide range of 5G smartphones across different price segments to deal with the onslaught of iPhones.

The newly unveiled Galaxy A42 5G might be the first step in that direction. Based on the rumors, the Galaxy A42 5G will be the most affordable 5G smartphone from Samsung. Even, the Galaxy A51 5G and Galaxy A71 5G launched at the beginning of this year also offered great value.

In the markets without 5G connectivity, Samsung is doing pretty well with its broader portfolio. After two years, Samsung once again became the leading smartphone market in India recently. 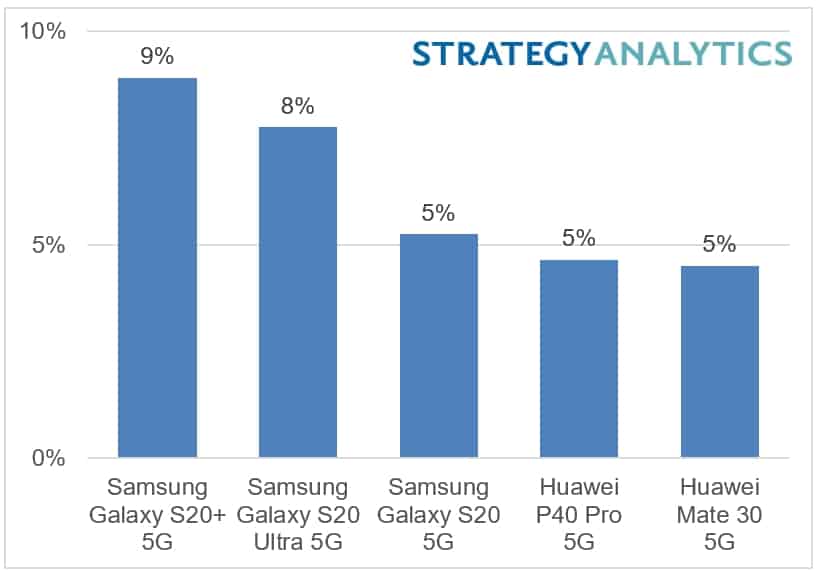