The overall shipments in the third quarter of 2020 indicate the smartphone market is recovering after the sales plummeted during the peak of the pandemic. Samsung also overtook Huawei to once again become the world’s largest smartphone brand. This is according to the latest report from the research firm Canalys.

Samsung regains its top position in just one quarter

Notably, overall shipments totaled 348 million units with a year-on-year (YoY) decline of only 1 percent in the third quarter. While Huawei briefly surpassed Samsung in Q2 2020, its market share took a big nosedive after it was bombarded with the sanctions. It only shipped 51.7 million devices in the Q3, down 23 percent YoY.

As per the report, Xiaomi shipped 47.1 million smartphones in the third quarter against the 32.5 million units in the same quarter last year. The massive gain in Xiaomi’s market share relegated Apple to fourth place. Especially in Europe, Xiaomi racked up big gains as Huawei is in the midst of a crisis.

The Cupertino giant has done an impressive job holding market share without any flagship launches in the last three quarters. Moreover, the launch of new 5G iPhones across different price segments should boost Apple’s market share in the fourth quarter. These new iPhones are yet to go on sale in many markets.

“This quarter was a welcome relief, with few restrictions on businesses and citizens between July and September. Limited supply of 4G chipsets will cause supply chain bottlenecks and increase production costs. Additionally, rising COVID-19 rates in regions such as Europe will soon force governments to bring back stricter nationwide measures,” said Ben Stanton, Senior Analyst at Canalys.

Realme, the sister-brand of OPPO, is now the world’s seventh-largest smartphone brand in the world. It has shipped nearly 15.1 million smartphones in the last quarter. If you didn’t know, the first Realme smartphone was launched in mid-2018. 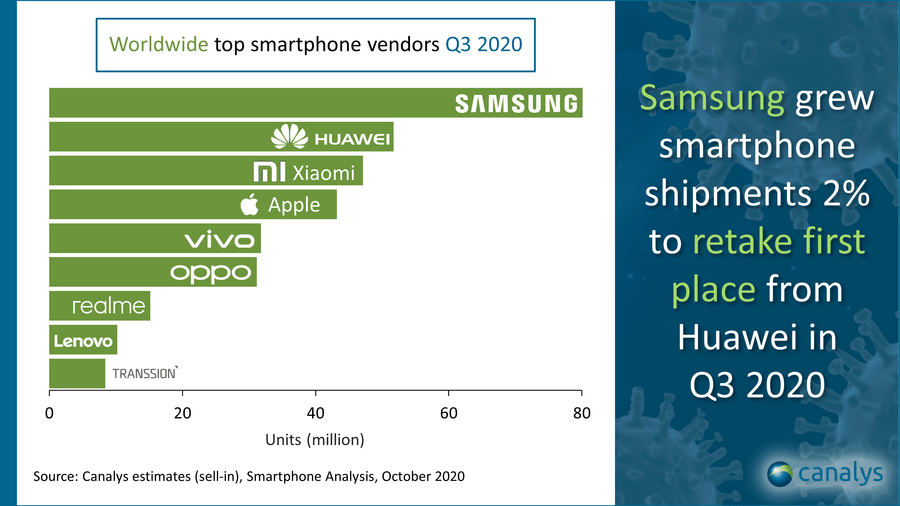