In the wake of Microsoft’s launch of the Surface Laptop Go, many have opined that it could be a perfect direct competitor to the rise of the Chromebook. And that’s understandable upon a surface level inspection. But it’s almost certainly — and entirely — incorrect on a number of points. Surface Go, it could be posited, can’t begin to compete with even budget-friendly Chromebooks.

That includes budget-friendly Chromebooks that don’t feature quite the dizzying array of specs too. Some of the best Chromebooks, even at the budget end, can and will perform better. That’s without taking away from the use cases most will need too.

Because it should be clarified, we’re not talking about the more pricey models of the Microsoft Surface Laptop Go. Those should, theoretically at least, match Chromebooks blow-for-blow — although there’s an argument to be made that Chromebooks will still offer a better experience.

Microsoft is selling three variations of its new laptop. The more expensive models, starting at either $699.99 or $899.99, offer 8GB RAM and an option of 128GB or 256GB SSD storage respectively. Both models have an in-power-button fingerprint scanner not included in the budget model.

All of the new gadgets, including the $549.99 budget model we’re discussing here, ships with the same processor. And on that front, Windows will have an advantage. Each of the gadgets ships with a solid 10th-Gen Intel Core i5-1035G1 quad-core processor and is packed with an HD+ 3:2 ratio, 12.4-inch panel.

In terms of connectivity, all models support Wi-Fi 6 and have a 720p webcam. That won’t support Windows Hello for face unlocking though. So buyers should be aware of that. There is, last but not least, one USB port for both USB-C and USB-A as well as a fast-charging Surface Connect Charging port and a headphone jack.

All of that’s attached to a full-size keyboard with 1.3mm in terms of key travel.

This is about the budget model and its storage space 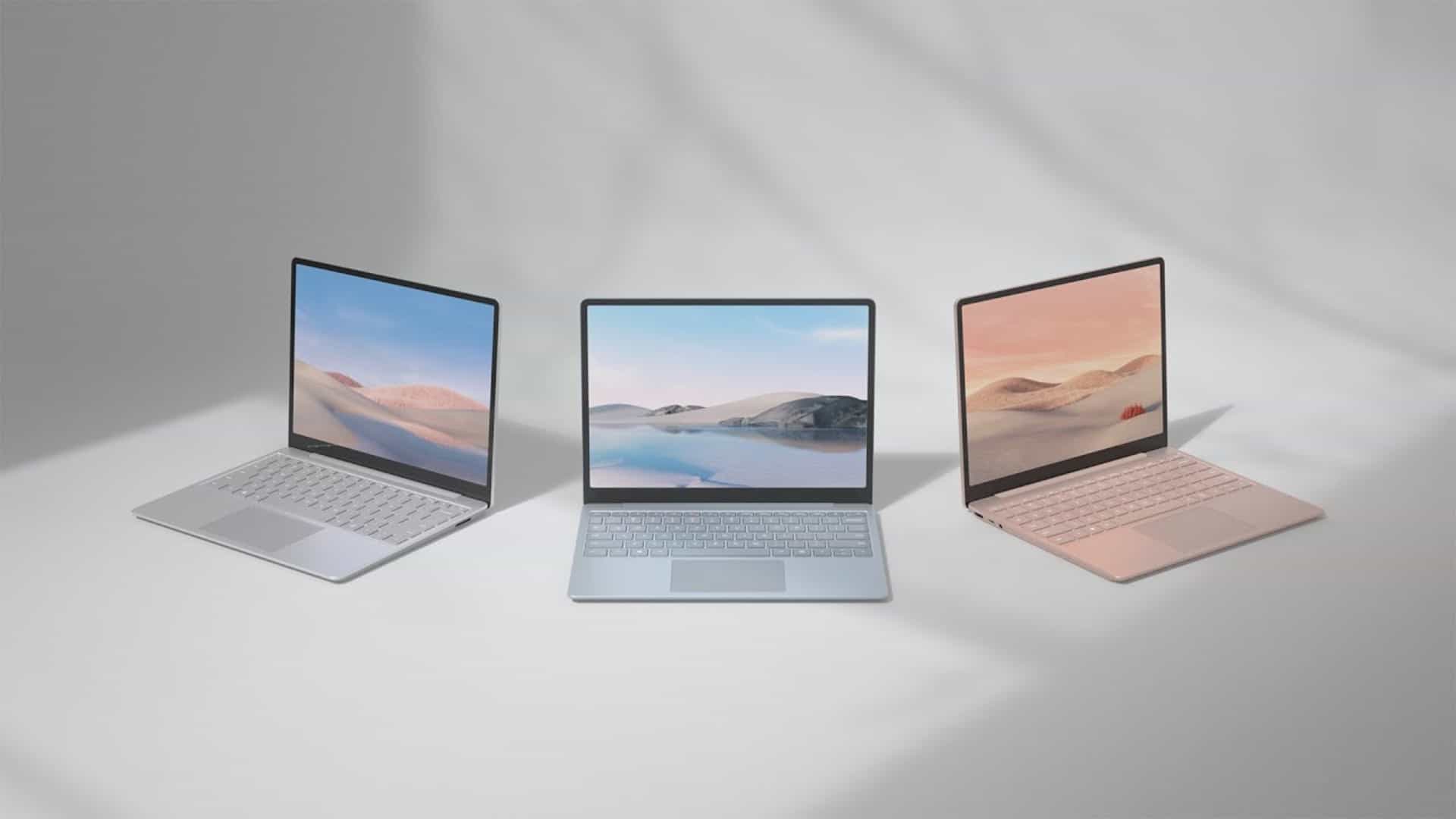 The argument here, with pre-orders opening up and shipments starting October 13, comes down to the RAM and storage. Specifically, for the budget model. As noted above, that model’s already missing some key features of its pricier counterpart. But it’s also only equipped with 4GB RAM and 64GB eMMC storage. That is undeniably light for a Windows machine.

To begin with, the typical size of a Microsoft Windows 10 install is 15GB. That brings the actual, user-available storage on this laptop down to 49GB. That’s before any applications or software are installed. The average installation size of Microsoft Office 365 and Photoshop, conversely, is right around another 5GB of space. So users that need those tools will already start at right around 44GB of space.

Of course, listing out the amount of remaining space that would be taken up by the world’s most popular applications should and arguably would already be fairly compelling. Summarily, users who really need the power of a $500+ Windows laptop will want quite a bit more space.

Potentially, users might lean toward a machine that has both more storage and RAM. But with an Intel Core i3 processor, for example, and possibly an earlier model process as well. Unless users really require a workhorse for coding or graphics design, the extra power isn’t really necessary. But the memory is undoubtedly the stronger argument to be made here.

4GB of RAM, with the average user accessing the web via Chrome — just for starters — is paltry. Chromebooks can get away with using less RAM due to optimizations. But that’s not really even a matter that needs to be discussed just yet. Microsoft Windows 10, in the configuration seen in the budget-friendly Surface Laptop Go, is not going to play well with that much RAM, setting the Chromebook platform aside entirely.

The amount of memory included by Microsoft at $549.99 is sufficient for many day-to-day tasks. It should work just fine for running Chrome, with the exception of users who have dozens of tabs open and leave them that way. It will certainly work for the company’s vastly improved new Edge browser. And most of what users will want to accomplish with their new laptop will be online.

Similarly, the memory will be more than sufficient for accomplishing most word processing-related goals. But there’s a severe disparity between what the memory has been set at and the processor.

An Intel Core i5-1035G1 processor is really only needed for more intensive tasks. Some moderate gaming, photo editing, or coding, for example. In the former case, 4GB RAM simply isn’t enough for most games and that’s not helped by integrated graphics either. In the latter cases, developers recommend a higher amount of RAM. And for good reason. Put simply, more memory prevents a jittery, unnecessarily unpleasant experience for end-users.

All of that, of course, is said without broaching the topic of multitasking, which most users need to be able to do at one point or another with their laptops. 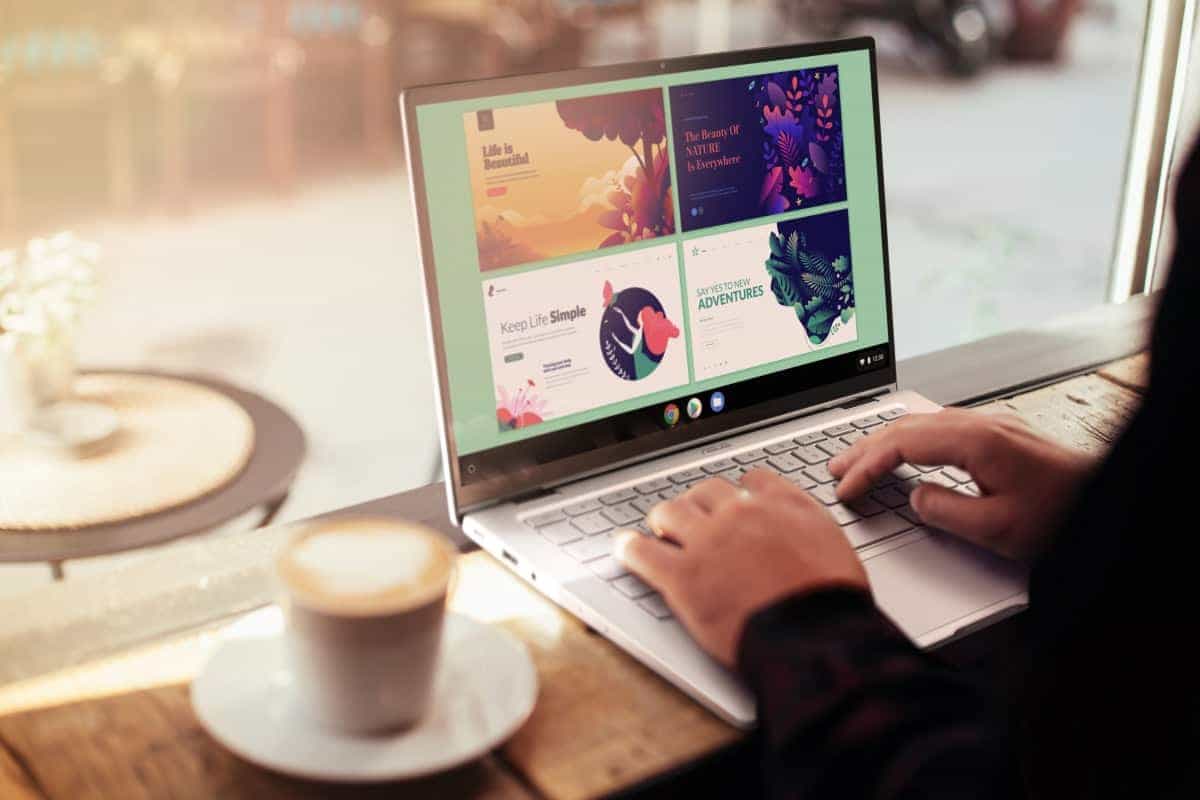 Now, one potentially damaging argument to be made for why all of that matters presents itself when considering comparably-priced Chromebooks. For brevity, we’ll be considering the Microsoft Surface Laptop Go and the ASUS Chromebook Flip C434.

Priced at $549.89, at the surface, the ASUS Chromebook Flip C434 is not quite up to snuff to compete with Microsoft Surface Laptop Go. Unlike the budget-model Surface laptop, this Chromebook comes with an 8th-Gen Intel Core m3-8100Y processor. But, importantly, that may be more appropriate for its 4GB RAM and 64GB eMMC storage.

Equally importantly, users arguably are getting a lot more for that price too. The ASUS Chromebook Flip C434, just for starters, packs a 14-inch screen in a body comparable to the average 13-inch laptop. That’s a slightly lower resolution at FullHD (1920 x 1080). But it’s a four-way NanoEdge display panel. So there’s less bezel to contend with too. And, at that size, everything’s packed into an all-aluminum shell weighing around 3lbs.

For ports, ASUS steps up a notch too. The Chromebook Flip C434 comes with two USB-C ports — with one allocated to fast charging — and a USB Type-A port too. A comparable 1.4mm key travel for the Chromebook is further separated by the fact that the ASUS — unlike the Microsoft Surface Laptop Go — has a backlit keyboard.

Dual high-quality speakers, a 10-hour battery life, a year of access to an extra 100GB cloud storage via Google One, and three free months of Google Stadia round out the package. As does the fact that the ASUS Chromebook Flip C434, true to its name, is a 2-in-1 device. So users can lay it flat, set it up in a tent or stand configuration, or even fold it around to use as a tablet.

Don’t you still get more and better software with Microsoft Windows?

One argument against the idea that any Chromebook is better than Windows is that Chromebooks don’t support Windows software. That’s an understandable and even acceptable challenge. However, neither do — to one extent or another — Linux or macOS machines.

Whether or not that matters at all is going to be subjective. Most users on Windows machines aren’t going to need the same applications and software that more professional users would. The overwhelming majority of users spend the majority of their time in Chrome or another web browser. And, it should be said, Chromebooks provide access to progressive web apps, Android apps, and Linux apps.

There’s also some speculation that Chromebooks could support Windows software in the future, via virtualization. That’s not really important here. On Chrome OS, thanks to the other software that is supported, there’s typically an alternative or comparable mobile variant available.

Photoshop Express, to provide one example, won’t do everything that full desktop version will. But it will help users accomplish cropping, skewing, collages, touch-ups, and recoloring. So will mobile Lightroom.

The basic tasks that most users would use these types of apps for, mobile apps can easily get done. And there are web apps, G Suite tools, and Linux apps that can fill in the gaps, for those rare times extra functionality is needed. Better still, the alternatives on a Chromebook are often free — as compared to desktop variants that most users will associate with Windows and that the Microsoft Surface Laptop Go will use.

Streaming media has all but replaced DVDs and CDs in a similar fashion. And cloud gaming is quickly ramping up as an alternative on its own front. As shown via Google Stadia, that can provide an even better experience for less money on a Chromebook — or just about anywhere else.

In as few words as possible, the bottom line is this. You can get a comparable or even better experience than Microsoft Surface Laptop Go by using a much cheaper Chromebook. It’s not only the fact that comparably-specced Chromebooks are generally less expensive, either.

For instance, the FullHD 12-inch, thin-bezel Lenovo IdeaPad Flex 5i Chromebook should offer a comparable experience in terms of build quality and performance.

Lenovo’s machine costs just $359 and ships with almost identical RAM and storage. Now, the company does only include a Comet Lake 5205U Celeron processor at that price. And a Core i5 processor is available at a bit higher cost. The cost doesn’t begin to approach what the Microsoft Surface Laptop Go does. But that chip, in a Chromebook, goes a lot further. Just like the RAM and storage tend to.

The real differentiator here, as hinted at the beginning and explained throughout, is Chrome OS. The specifications Microsoft chose for the budget variant of its Surface Laptop Go, comparatively speaking, are mismatched. The RAM and storage are not ample to do the heavier tasks the chip is capable of accomplishing.

It’s a tempting device in terms of a first look. But consumers have two options that are undoubtedly better. That’s either spending more money to get the more well-put-together variants. Or, conversely, spending less money and buying a Chromebook that’s more comparable to the more expensive versions of the Microsoft Surface Laptop Go.