When it comes to to-do list apps, there are hundreds of them out there. Some of which offer plenty of features that you’ll probably never use. But there’s one to-do list app that keeps things simple, and that’s Kanbani.

That’s how a to-do list app should be though. Keeping things simple so you’re not spending a ton of time adding tasks to your to-do list. And making it harder to see what you need to do today.

Kanbani’s UI is also pretty easy to use. On the main screen, you’ll see three tabs. These are To-Do, Doing, and Done. I like this setup quite a bit actually. As it allows you to easily see what you need to do, what you are currently working on and what you have finished already. Without clogging up the main screen. You can change these tabs too. Making them categories instead of status of the to-do’s, is one way of changing them.

Adding new tasks is super simple as well. Simply tap on the icon in the upper right-hand corner that looks like a card with a plus sign on it. The icon looks like this, instead of just a plus sign, because the tasks show up as cards.

From there, you are able to add a title for the card, as well as set a description. It has a built-in copy/paste functionality too. So if you copied a sentence from your email, you can easily put it into the title of the card.

There’s also the ability to set a due date, archive it and more. You can color-code the cards too, allowing you to separate different projects. For instance, I could make reviews red, while other articles could be blue and any personal to-do’s could be orange. This makes it really easy to see what needs to be done in a quick second.

Finally, you can choose which list to add it too, and even add a new list if you wanted. This is a very easy way to keep all of your tasks organized within the app.

You can create multiple boards

With Kanbani, you can also create as many boards as you want. This is good if you have some tasks that you need to do for work, and some you need to do for home or in your personal life. So you can keep them separate but also use one app instead of two, to stay on task.

Each board has it’s own settings, which is a little clumsy to get into. But once you are into its settings, you can adjust the name, the author, order of cards, and much more.

Some of these settings can be altered independently of all the boards on your Kanbani account. Like the related name visibility. By default, it will show if there are different names, but you can also opt to make it visible or invisible all the time.

Backing up your boards is simple

Kanbani also has a backup option built into the app. Allowing you to backup all of your boards, lists and tasks.

There is cloud backup available, but only for Dropbox. This makes it easy to back up your boards and tasks in Kanbani if you’re moving to a new phone.

Kanbani will automatically back up your content, and by default it is saved to /files/backups within the Kanbani folder on your device. It will backup every six hours, and keep a maximum of 30 backups. Now these are the default settings, so you can change these to more or less often, (and more or less backups). Finally, you can choose from a backup to restore. These backups are labeled with the date and time, to make it easier to decide which one to restore.

Finally, you can opt to create a backup at any time. Just tap on the gear icon at the top of the screen, then tap on Backup and Create Backup. It’ll initiate the backup and start backing up your content in a few seconds. It’s just that simple.

The local backups are not that large. For instance mine are less than 50kb each. So they won’t take up a lot of space on your device. It will also only make a new backup when data has changed. Like adding new cards, archiving cards, etc. So you won’t end up with a bunch of backups that are essentially the same.

Sync makes collaboration easier than ever

One of the more underrated features of Kanbani is arguably it’s Sync feature. While it might sound pretty limited in functionality, it is actually really powerful. It allows you to easily collaborate with other users, and that’s hugely important these days with most people working from home now.

With the sync feature, users are able to share their boards with other people. Just click the down arrow in the upper right-hand corner of the screen, and then tap on “Sync”. From there you will have options to start sync, or even open a QR Code, that another user can scan and get access to your board.

There is also an option to sync this with an FTP site, via Android Share and a few other ways too. Making it pretty versatile, and not just limited to sharing a scannable QR code to share your board with someone else.

The options for syncing are pretty granular. You can choose which boards you want to sync, how often it will sync automatically (this is good for using with your co-workers as things can change pretty quickly), and even create a different syncing profile with different settings. Which can be good for using on a separate board. Perhaps one profile for your work board and one for a personal board that you don’t need to sync as often, or have encrypted.

Kanbani is all about privacy, even when it comes to sync. You can choose to encrypt  the syncing process if you wish.

Once you press “Sync” the syncing process only takes a few seconds. This will depend on your settings and network speed, of course.

Kanbani is available on the web, desktop, Android and iOS. So no matter where you are, or what device you are using, you can share your board with other people.

Keep track of your tasks on desktop & mobile

Kanbani isn’t just a smartphone app. It works on the web as well. You can check out a demo mode of what it looks like here. Using the web version makes it even easier to share with others. Just grab the link and anyone you share that link with will be able to view your board. You also still have the option to download a scannable QR Code that will open the board too.

Importing and exporting is also available on the web version of Kanbani. Which you can import from Trello, Excel and more. This makes it easy to get started with Kanbani, or easy to leave (if exporting) Kanbani for another app like Trello. 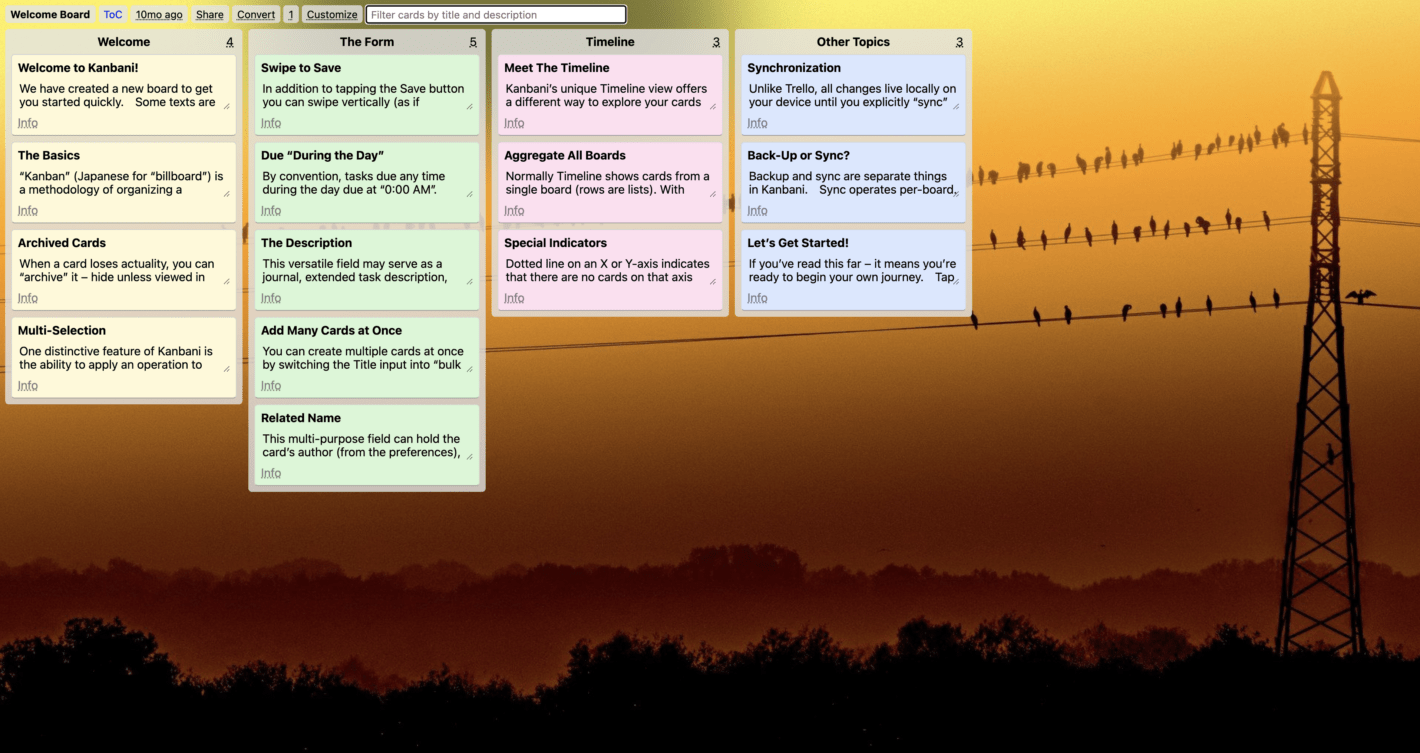 Kanbani is open-source and you can check it out on Github.

An internet connection is not always needed

One of the joys of having a privacy-centric to-do list app like Kanbani, is that you are able to use it online and offline. So if you are working and the internet is out, you can still use Kanbani to add tasks, complete tasks and check to see what is still on your to-do list. Since it is not syncing every few seconds (unless you turn on that option, but more on that later), internet is not needed 24/7 for Kanbani to work.

There’s also no registration needed for Kanbani. That might sound strange, but this is actually a privacy thing. Where Kanbani isn’t holding onto our usernames and passwords, it means that it is much harder to hack our accounts. And the sharing is all done via URL and QR Code sharing.

The most privacy-centric task management app yet

These days, we are all worried about our privacy, and Kanbani is taking that seriously. From not using user registration, to using encryption, to syncing to your own server, Kanbani has gone above and beyond in regards to user privacy. Kanbani goes as far as to remove Google Play Analytics if you download the app from its site, instead of Google Play.

Kanbani has one-tap encryption available, allowing users to have peace of mind with their to-do lists and boards.

Users have the ability to import/export their boards to any other app, making it easy to leave Kanbani for another app. Without having to go through the struggle of recreating your boards and tasks in another app. It’s just a few clicks away.

Finally, there’s also the option to sync to your own server. So instead of using Kanbani’s server, and worrying about whether it is safe or not, you can use your own server. Or even keep your boards local.

Users love that Kanbani focuses on privacy, among everything else. Just take a look at this testimonial from a real Kanbani user:

I am quite paranoid when it comes to my stuff – 90% of all tasks I had, have or will have live in Kanbani. I simply cannot afford losing it. Most online services are not open source, you cannot peek inside and take out what is yours. Kanbani is built around Realm, a free database engine, and you can extract Realm data with Kanbani’s Back Up command and view it in Realm Studio – one tap and you get a file with all of your information, and that without root.

Kanbani can export and import boards using JSON (via a “sync” to a “local file”). To be safe, I do Realm backups and JSON as well, so with these measures chances to lose my data are near zero. Take this year’s news about Lightroom irreversibly wiping out photos on users’ devices (source) – this simply cannot happen with Kanbani. And the developers can never make my “first 100 cards free, then $1 per card” – even if they wanted.

Kanbani is free, with no strings attached

This is not something we see a lot of these days, but Kanbani is completely free. There’s no price to download the app, no in-app purchase and no ads.

There’s also no catches or gotchas with Kanbani. It is legitimately free.

Kanbani is not even charging for syncing or sharing. There’s no limits at all within the app, on boards, tasks, or even characters. Which makes Kanbani great for taking notes within the cards.

As I’ve mentioned already, Kanbani is not the absolute best app out there, but it does a good job at helping you stay on task, and it is great when it comes to privacy. While it might not be the end of the world if your to-do app gets hacked, it’s still not something you want to have happen. And Kanbani is taking steps to ensure that doesn’t happen. From not requiring user accounts, to keeping ads out of the app, and everything in between.

Kanbani’s feature-set is actually quite rich, even though it may not look like it on the surface. With the web viewer, so you can work on your to-do list from your computer. As well as the ability to sync your boards and share with other people – and that is board-dependent too. It’s incredible the amount of features baked into Kanbani.

I’ll be switching from Todoist over to Kanbani for the privacy features alone.

You can talk with Kanbani developers over on the XDA Forum.