Huawei has officially confirmed to launch the flagship Mate 40 series on October 22. The company is expected to launch a total of three smartphones – Huawei Mate 40, Mate 40 Pro, & Mate 40 Pro+. Now, the Mate 40 Pro with model number NOH-NX9 is listed on the benchmarking website Geekbench revealing its key specifications.

Over the last few weeks, the same device was also spotted on various certification websites worldwide. Obviously, the company will be debuting its latest flagship Kirin chipset with the Mate 40 series. Under the hood, the Mate 40 series will come powered by the new HiSilicon Kirin 9000 processor.

It will be the first Kirin chipset to be built on the 5nm process. Since the name of the chipset is not yet officially revealed, you have to take that with a pinch of salt. As per the leaks, the CPU on the new flagship Kirin chipset will come in a 1+3+4 tri-cluster arrangement.

The new Cortex-A78 cores should also further boost the performance of this chipset. In terms of GPU, the Kirin 9000 features the latest Mali-G78 GPU. As seen with the last couple of flagship chipsets from Huawei, the upcoming SoC will also come with a 5G modem onboard.

Interestingly, the device listed on Geekbench runs on the last year's Android 10 out of the box. Still, the company should be offering the newly released EMUI 11. Moreover, the device will continue missing out the Google apps and services.

Instead of Google Play Store, the Mate 40 smartphones will include Huawei's own AppGallery for downloading the apps. The Mate 40 Pro variant used for benchmarking includes 8GB of RAM. The company should be launching all three devices in multiple storage options.

On Geekbench, the Mate 40 Pro has scored 1020 in the single-core and 3710 in the multi-core tests. Speaking of other specifications, the leaks already hinted the device to sport a quad-camera setup on the rear featuring a 108MP primary camera.

Like the P40 Pro launched earlier this year, the Mate 40 Pro will also come with dual punch-hole selfie cameras. It might feature a dual-curved OLED display on the front with 120Hz refresh rate support. To date, the company only offered 90Hz displays with its flagship smartphones. 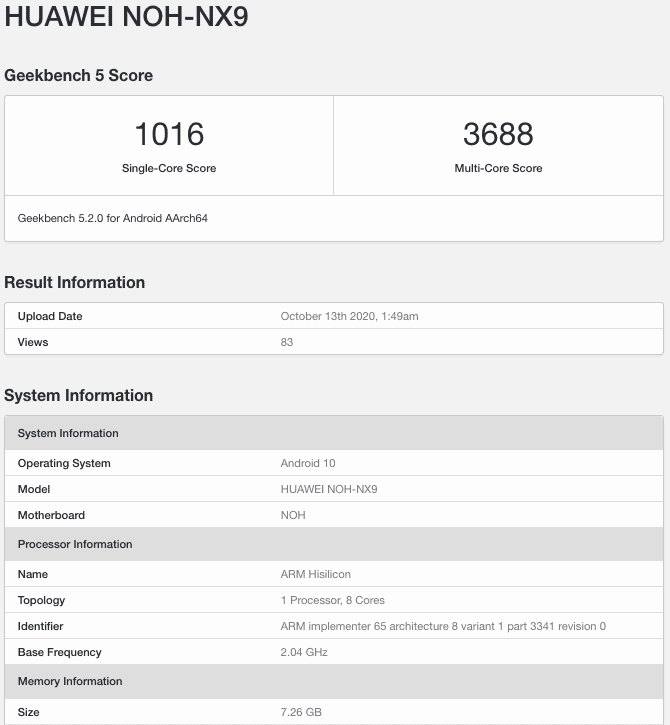 Advertisement
Trusted By Millions
Independent, Expert Android News You Can Trust, Since 2010
Publishing More Android Than Anyone Else
4
Today
133
This Week
291
This Month.
291
This Year
110481
All Time
Advertisement