Sony’s PS Plus Collection for the PS5 is a collection worth having. Because it’s a roundup of some of the best games that the PS4 generation had to offer.

For PS5 owners, the PS Plus Collection presents a wonderful opportunity to experience some of those games. Some people will have some or all of the games in the collection. But many will not and that’s where the real value is.

All of the games in the collection are excellent and should be experienced. And if you pre-ordered or plan to buy a PS5, then you get these games as freebies. When normally these would cost you at least a couple hundred dollars to grab them all.

Today, Sony detailed what to expect with the PS Plus Collection and again highlighted which games would be included.

The PS Plus Collection is available on PS5 on day one

This isn’t really new as Sony has confirmed it before. But it’s worth reiterating.

On launch day, which is November 12 in the US, Japan, Canada, Mexico, Australia, New Zealand, and South Korea, and November 19 for the rest of the world, the PS Plus Collection will be available to all players.

You do have to be a current PS Plus subscriber, or sign up once the collection is live if you want to access the games within it. Once you’re set up with that though, you’ll get to play those games as long as you continue subscribing to PS Plus.

That’s no different than the normal PS Plus games that are added to the library every month. As you can claim those in the month that they release, and basically keep them forever as long as your PS Plus subscription is active.

The games are not automatically on your console

Naturally, Sony isn’t just going to load these games up on consoles. Since you need an active membership, you’ll only have these available to play once you download them.

You will need to claim each game you want to install too. The nice thing is that every game will stay available for the foreseeable future. Unlike the regular PS Plus titles, Sony won’t be removing these at the end of the month.

So whether you go to claim them on launch day or a few months afterwards, you’ll still be able to claim every single one of them. That being said, Sony could always change this down the line. Either by adding in new games while taking out others, or just by removing some.

The latter may not be likely, but you’re always better safe than sorry and you should claim them as soon as you’re able to. That doesn’t mean you have to install them. But should the moment come where you want to, the games will already be claimed.

If you need a recap on the games that are part of the collection, you can find them all below, separated out into games from worldwide studios and third-party publishers. 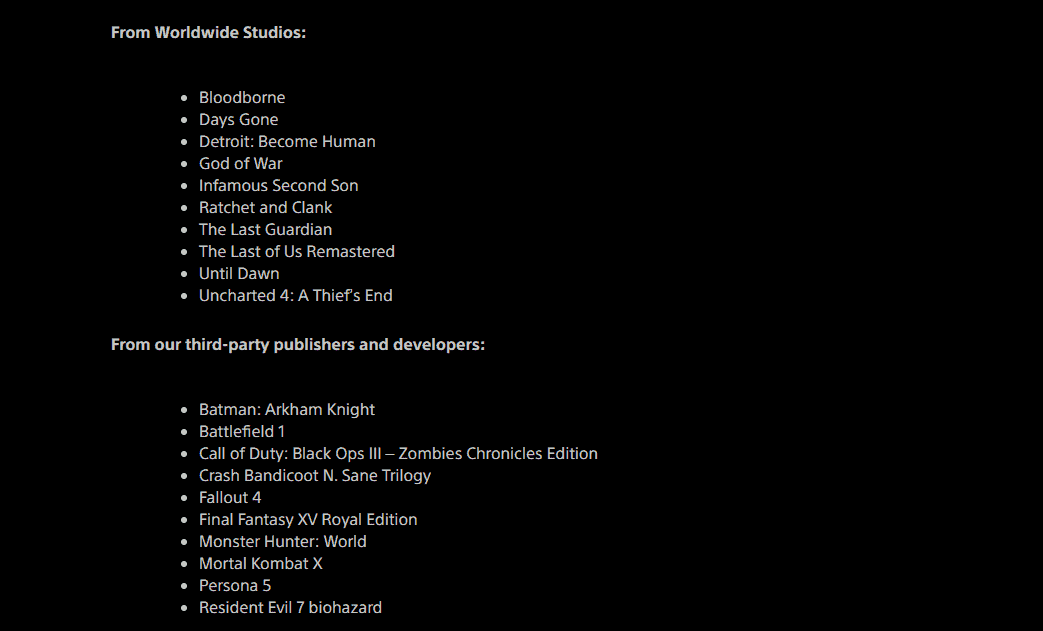