As per the official support page for Google Pixel phones, the Pixel 2 and Pixel 2 XL will not be receiving further updates after December 2020.

Google introduced its 2nd-gen Pixel lineup in 2017 with the Pixel 2 and Pixel 2 XL. The devices have been receiving continuous support and updates from the OEM until now.

These devices were iconic. And by iconic we mean the uber-popular dual-tone Pixel look and also the advanced camera features like Portrait Mode, Motion Photos. etc.

Well, technically these were the best devices or best camera devices that one could buy. The camera performance was simply outstanding and it can still compete with the flagships of 2020.

But the latest support page reveals that the recently received October 2020 security patch is the last update, the Pixel 2 and Pixel 2 XL will be receiving.

Moreover, after December 2020, no more updates will be pushed for the duo, i.e. the Pixel 2 and Pixel 2 XL anymore. Besides they will remain on the Android 11 OS going forward.

For those who are wondering about the November 2020 security patch, Google has that thing sorted out. Basically, a cumulative security patch for the Pixel 2 and Pixel 2 XL will be pushed in December.

But October 2020 is the last month of security support that the phones will be receiving, officially. After which modding community would be the only source of updates and other OS-related ROMs.

It is now a sad story altogether. Google gives 3-years of platform/OS or security update support for its devices. And since the device was introduced back in 2017, 2020 is the end of the official shelf life of the device.

In fact, Google is the company that influenced other OEMs.  Notably, OnePlus and now recently Samsung, to join the three-years of update support for devices.

However, Google still lags behind Apple, which provides 5 years of update support for its devices. We believe that at some point in time, Google should also try to match that up.

Good thing is that there are options available for those who are strict about their security or OS updates. The recently launched Pixel 5 and 4a 5G are decent mid-rangers which the Pixel 2 owners can opt for.

Let us know in the comments below, are you willing to upgrade over to either Pixel 5 or 4a 5G from your Pixel 2 lineup. Or you would go for another brand altogether, keeping in mind the timeframe of update support. 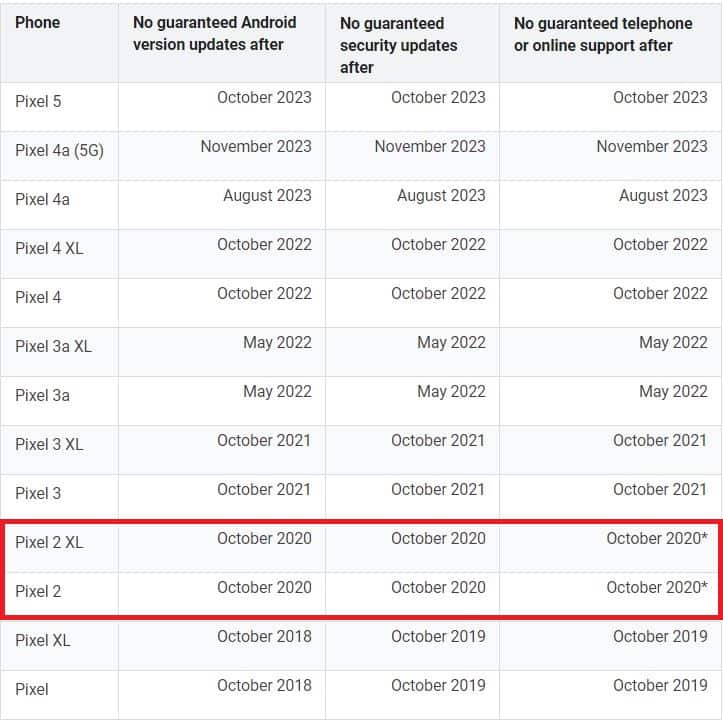