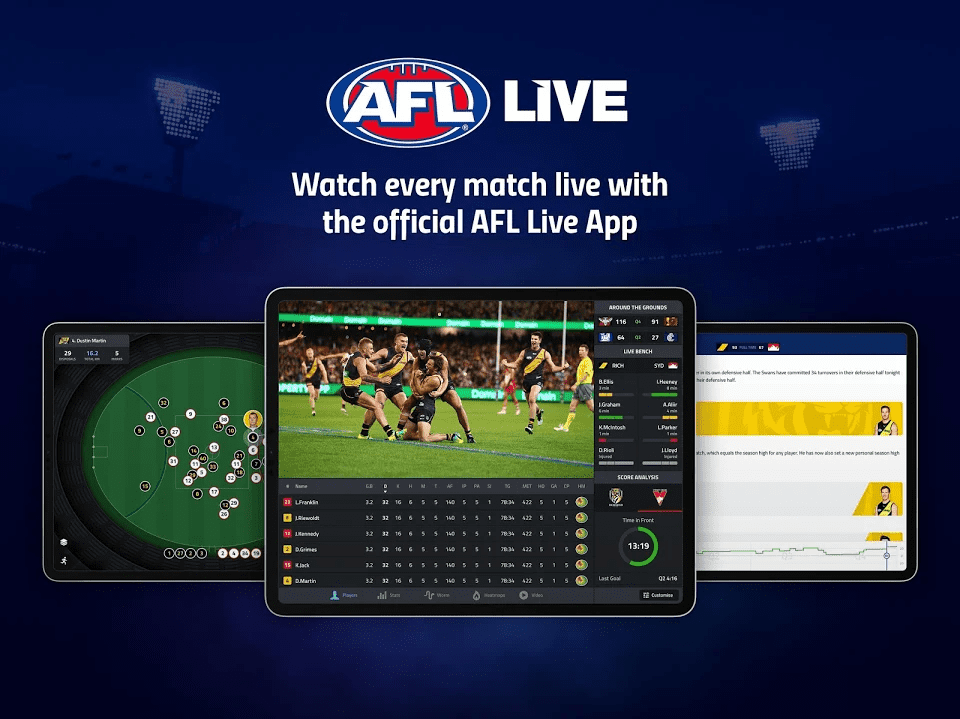 With fans unable to attend as many sporting events as usual at the moment, technology is stepping in to help fill the void of the matchday experience. Telstra has teamed up with the official AFL Live app, adding innovative solutions to get the audience as close to the action as possible.

Augmented Reality – sometimes known as AR – allows users to superimpose imagery and experiences from the virtual world into their everyday lives, usually through mobile apps. Fans can now see how their favorite team line up in a brand new, interactive way. Once you point your mobile device at a suitable surface, the images will appear. Users can click on specific players which will then trigger their stats to be projected onto the big screen that forms part of the AR experience. This season is the first time that this technology has been deployed in the sporting world to such a degree.

The love affair with AFL means domestic and international brands are taking notice of Aussie Rules. International broadcasting deals are already in place in China, the UK, New Zealand, Canada and Russia with a growing viewership overseas. The sport’s popularity extends to other sectors too. Many international bookies now offer AFL odds throughout the season, and non-local Aussie Rules fans can find the matches featured on betting sites like Betfair, Bet365 and Unibet. Although based in the UK, bet365 has a license in Australia as well, which allows them to offer their Australian user base a host of AFL betting markets on every match as well as futures such as the Grand Final winner and the Norm Smith Medallist for 2020. That’s on top of the 80 or more markets for each Aussie Rules game during the season.

AFL Continues To Rule To Roost

Closer to home, the AFL remains Australia’s favorite sport in terms of viewership. As of 2016, there were over 1.4 million players at more than 25,000 clubs. With this level of interest, it’s no surprise that the 2019 Grand Final drew 2.93 million viewers across the 5 city metro and regional areas. As a whole, the campaign drew 88.2 million viewers at an average of 459,000 per game. These numbers put it well ahead of the competition including cricket, soccer and rugby league – all of which are dwarfed by the numbers that Aussie Rules can generate in both physical attendance and those watching from home or online.

Even accounting for the re-negotiated TV rights deal earlier this year, Seven will pay the league $730 million over the next five seasons to show the competition. With businesses willing to invest significant time, money and resources into the experience of watching remotely – such as the latest in AR – there are plenty of reasons to be excited about the future of Aussie Rules, both domestically and further afield.

What Next For Augmented Reality Within Sport?

Perhaps the most successful implementation of AR is within the Pokémon Go app, which has now been downloaded over a billion times worldwide. It’s also popular in retail, allowing prospective customers to see how a new piece of furniture would look in their house, or if they’d suit a certain style of glasses without having to try them on in person. Now though, AFL fans can get one step closer to their club on matchday. Telstra hopes to be able to offer additional features in the future such as isolating a particular player to zone in one their actions or create real-time replays, all without leaving your living room.

This sort of technology could revolutionize the way we watch sport, especially with more affordable 5G-enabled devices coming onto the marketplace. As the network infrastructure continues to be rolled out across the world, the need for WiFi will no longer be a barrier to even the most data-heavy applications. Access to the fastest available mobile network without eye-watering costs could mean AFL becomes a trailblazer at the forefront of what’s possible to bring fans closer to the sports that they love.