Twitter is planning to roll out it’s prompt “read before you retweet” to all users. The social media giant has been trying to improve the quality of the content people share on its platform.

It has been experimenting with quite a few new features lately especially now that the November election is around the corner. Back in June, the company announced a trial run for Android where it prompted users to read an article before retweeting it to their followers. 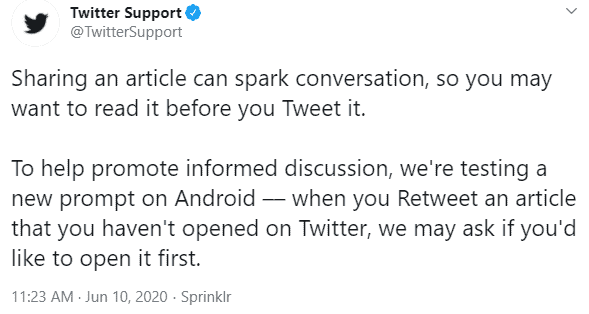 Their aim with the trial was to help spark a conversation but also promote informed discussion. Articles can go viral just easily as videos on social media especially Twitter which has a larger political bent compared to Instagram or Snapchat. Instagram and Snapchat do have warnings for certain content on their platforms.

Today Twitter announced that they saw more people opening articles and reading them after seeing the prompt. The number of people opening articles before pressing that “Retweet” button went up by 33% in the trial. Twitter also claims that in fact, people open articles 40% more often after seeing the prompt.  In a tweet, they said that some people did not end up RTing after they opened (and presumably read) the article.  One can presume that “some people” was a very small number since no actual percentages were reported! Twitter closed out by noting, “Some Tweets are best left in drafts 😏”. 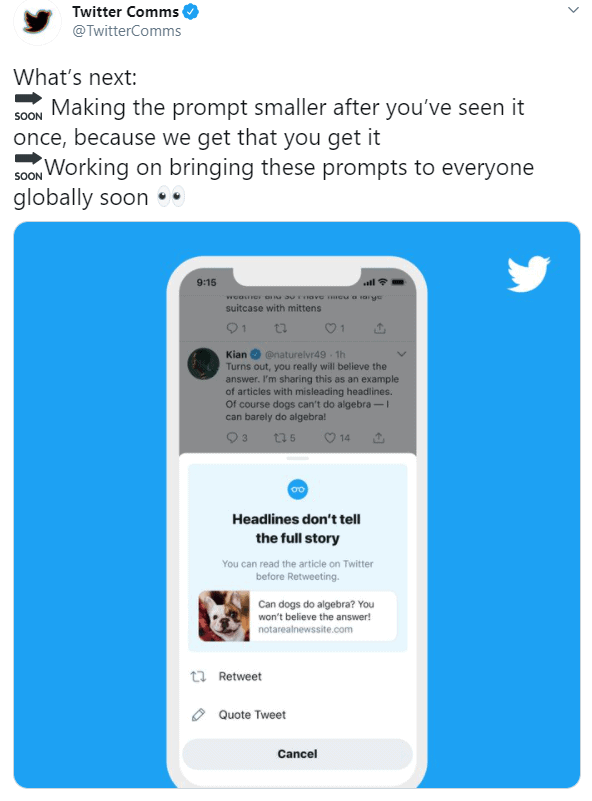 Based on the image from the official Twitter account, looks like the iOS app will be getting this prompt soon. The image also confirms that a global rollout is imminent.

This social media giant is definitely trying to chart a different course and make us more informed in the process. This change along with other changes that they have been making recently are in the right direction. Some of the changes are limiting replies to tweets or warning users before they send offensive replies. Another change that has garnered a lot of press is the “tweet contains manipulated media”.

Hopefully, these changes will make the platform a place where meaningful informed conversations take place. It may just spark the right amount of behavior change which could help address some of the social media woes.

Now we can only hope that one day they will actually give us that elusive edit button we all have been clamoring for!