With the Galaxy S20 series, Samsung has changed its flagship lineup to make the Ultra smartphone the new powerhouse for the brand. In the first half of 2021, the company will be launching the new Galaxy S21 Ultra as the successor to the current-gen Galaxy S20 Ultra. The device is now spotted on the TUV Rheinland certification website revealing its battery capacity.

A few weeks back, the Chinese 3C listing revealed the battery capacities of the other two Galaxy S21 smartphones. The battery on the standard Galaxy S21 with the model number EB-BG991ABY (SM-G991) will have a rated capacity of 3,880mAh. However, the actual capacity of the device will be 4,000mAh, the same as its predecessor.

Previous leaks also revealed the next-gen Ultra variant could come with an under-display camera on the front. On the rear, the quad-camera setup will include two separate zoom cameras. The standard telephoto sensor will offer up to 3x zoom. Meanwhile, the other sensor will be a periscope-style telephoto sensor with more than 5x lossless zoom.

As for the processor, the Galaxy S21 devices will come either with the Snapdragon 875 or the Exynos 1000 SoC, depending on the market. The Galaxy S Ultra smartphone launching next year is also rumored to get the S Pen support. As it's too early to get any sort of confirmation, take these details with a pinch of salt. 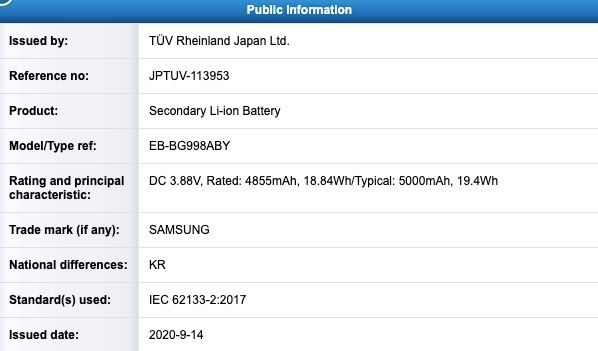