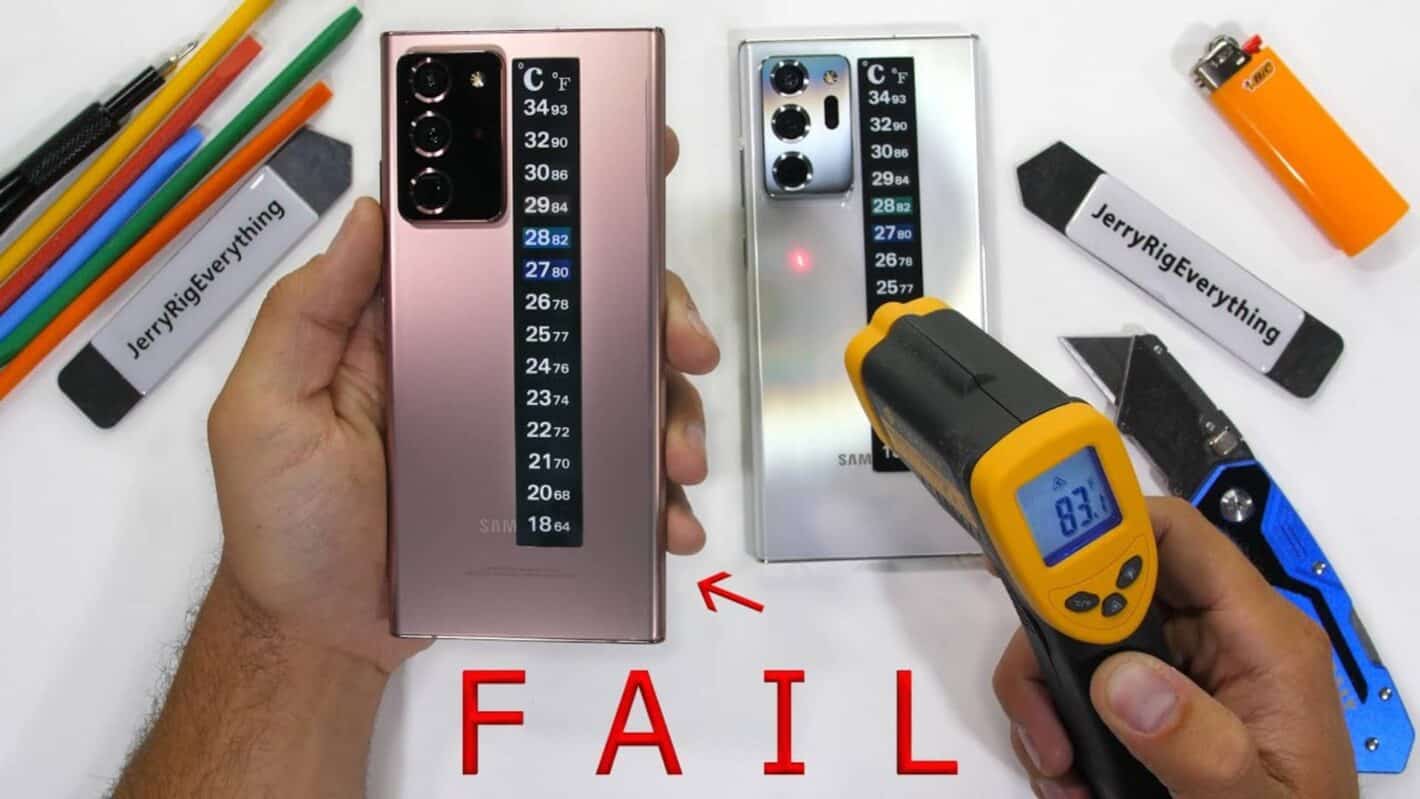 Comparison reports on the Samsung Galaxy Note 20 Ultra variants have been circulating since the company launched the flagships. Primarily, that's because the company released two versions. In one, the company coupled its in-house Exynos 990 SoC with a copper vapor chamber cooling system. The other utilized a Snapdragon 865 and a graphite cooling arrangement.

Now JerryRigEverything's Zack Nelson is showing us just how different the two configurations are. And the differences, while small on paper, aren't small at all under testing.

The associated video is, of course, filled to the brim with Mr. Nelson's off-the-cuff humor and quips. For instance, the presenter attempts to measure temperature differences with a fish tank thermometer. But the thermometers are poorly suited to the task. Especially since the phone temperatures are much higher than those can measure and get to those temperatures fairly quickly.

The bulk of the video focuses on the performance and cooling. Cooling remains consistent across the chips, even when Mr. Nelson swaps the cooling system across devices, the performance does not. The Snapdragon variant performs better right out of the gate. That's with around 16-percent better scores in the benchmark-based test.

The latter device also performs better on battery life. By the end of the test, the Samsung Galaxy Note 20 Ultra powered by the Snapdragon processor has 5-percent less battery. Mr. Nelson also points out that the colors on the Exynos variant don't appear to be as vivid.

This Galaxy Note 20 Ultra comparison has a clear winner

Now, objectively speaking, there are plenty of reasons anybody would want Samsung to simply stop using Exynos chipsets.

Not only do Snapdragon chips consistently perform better. But, as this comparison of the Samsung Galaxy Note 20 Ultra proves, Samsung doesn't seem to account for that. More succinctly, that's the case even when Samsung chooses to sell both devices at a similar price point and market the two variants the same.

Similarly, there are good reasons for Samsung to continue using Exynos. Those arguments tend to center on competition in the market. That's as opposed to any points to be made about performance.

Within the context of this latest teardown and performance test, Samsung should probably stop making one or the other. Or, at the very least, stop overcharging for an underperforming international variant.