POCO had introduced the POCO X3 NFC earlier this month. That was the POCO X3 global launch, but a phone is expected to reach India soon, and it seems like a slightly different variant of the device is coming to that market.

The POCO X3 variant for India surfaced in the Google Play Console, and it includes 8GB of RAM. As some of you probably already know, the regular POCO X3 that got announced includes 6GB of RAM. 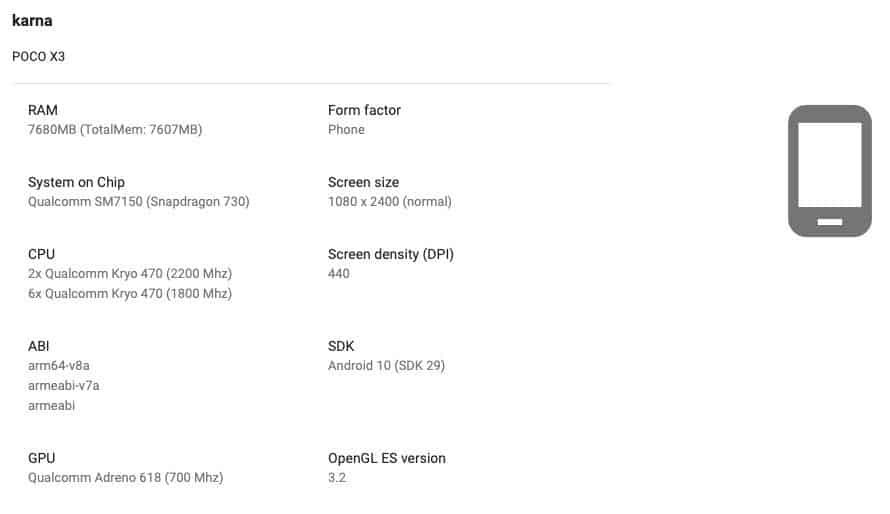 It seems like POCO plans to sell a more powerful POCO X3 variant in the Indian market. The 6GB RAM model may also be available, though, just to offer Indian consumers some choice while purchasing the device.

This smartphone is expected to reach India on September 22, so in less than a week ago. What’s interesting about this Google Play Console listing is the fact that this phone seems to come with a different chip.

The Snapdragon 730 is listed here, while the global model includes the Snapdragon 732G. It seems like the Indian model will arrive with a slightly different processor as well, at least if this listing is to be believed. That chip does come with the same GPU, so the difference shouldn’t be noticeable.

The listing also mentioned that the device will feature a 2400 x 1080 display, which was to be expected. This listing does not really share any more information, but we know exactly what to expect.

The phone will include a 120Hz display, and a large battery with fast charging

The Indian variant of the phone will likely feature the same specs as the global model, well, except the ones we’ve highlighted earlier. It will feature a 6.67-inch fullHD+ LCD display with 120Hz refresh rate.

The phone will ship with Android 10 out of the box, along with MIUI 12. Two SIM cards will be included (hybrid setup), as will a 5,160mAh battery with 33W fast charging.

The phone will include stereo speakers, and a 3.5mm headphone jack. It will also be IP53 certified, in other words, it will be splash resistant.

You can expect to get a 20-megapixel front-facing camera, and the device will be available in at least two color variants, Shadow Gray and Cobalt Blue.