OnePlus is all set to launch its T-series flagships for 2020, i.e. the OnePlus 8T on September 14. And before the release, the OnePlus 8T is now making rounds on the internet as a 12GB RAM variant was spotted on Geekbench.

Besides, the company has also not helped the device to be under wraps. In fact, OnePlus has already revealed some of the key specs of the OnePlus 8T smartphone.

For the unaware, the OnePlus 8T will sport a 120Hz display, 65W fast charging support, 4,500 mAh battery, and much more. Now, as per the latest report by MySmartPrice, we also get a hint about the processor.

OnePlus has had quite a busy 2020. We got the OnePlus 8 and 8 Pro earlier this year. Then the company ventured into the mid-range segment with the OnePlus Nord.

There was much hype created around the release of the OnePlus Nord phone. And finally, to end up their proceedings for the year, the company is all set to release OnePlus 8T and 8T Pro.

Following the traditions, OnePlus will launch the OnePlus 8T first and then OnePlus 8T Pro will come to picture. And before the launch, we almost know what OnePlus 8T will pack.

OnePlus T-series phones are always known to pack the latest and greatest specs available in most of the cases. So, it should come as no surprise if it comes with 12GB of RAM.

Besides, the phone will be powered by the Qualcomm Snapdragon 865 processor. We are slightly skeptical here because the Snapdragon 865+ chipset is already available. So why SD 865 and not SD 865+? We are not sure.

Moreover, as per the listing, the OnePlus 8T smartphone with model number KB2000 managed to score 3,843 points in the single-core test and 11,714 points in the multi-core test.

Another interesting thing that the Geekbench listing reveals is that the phone will run on the latest Android 11 OxygenOS 11. Making it the first phone from OnePlus to ship with Android 11.

Under the hood, it will be juiced by a 4,500 mAh battery and will support insane 65W fast charging. As per OnePlus, you will get a full charge in about 39 minutes and around 58% in about 15 minutes.

So, you should have no issues or complaints regarding the battery of the device. On one hand, the battery will long last, thanks to 4,500 mAh battery. And on the other, you will be able to get your phone juiced up in a matter of minutes. 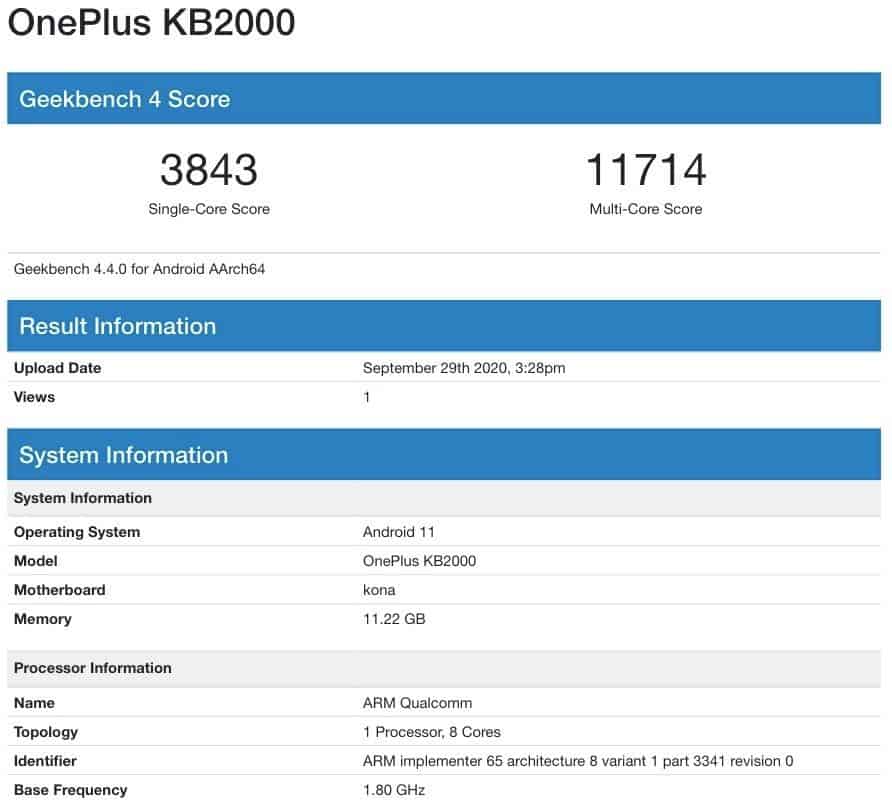