According to a new report from market research firm Canalys, the value of North America's wearable market remained flat year-on-year (YoY) in Q2 2020. The shipments of wearables in the region grew 10-percent annually to 8.5 million units. However, the value of that growth was negated by an 11-percent decline in the average selling price (ASP).

The ASP of wearable devices dropped to $235 in the second quarter of this year. Low-cost smartwatches and activity trackers saw a strong demand amid the COVID-19 induced economic recession.

Samsung and Fitbit falter as Apple stretches its lead

A total of 3.2 million Apple Watches were sold in North America during the period between April to June 2020. The numbers account for more than one-third (37.6 percent) of overall shipments.

Fitbit is still the second-most popular wearable brand in North America but its market share is declining. The company shipped 1.6 million wearable devices in Q2 2020, down 12-percent from 1.9 million units a year earlier. Perhaps, people are moving away from Fitbit following Google's acquisition of the company, which brings in data privacy concerns.

Samsung saw an even worse decline as it shipped only about 0.4 million wearable devices in North America in the second quarter. That marks a steep 48-percent drop in shipments from a year earlier. Garmin leapfrogged the South Korean company to sit third with 0.7 million shipments.

Samsung launched the Galaxy Watch 3 last month. It should help the company regain some of the lost ground in Q3. The company also recently launched a low-cost fitness tracker in Galaxy Fit 2, something that fits the current market situation.

Devices from lesser-known brands, which are primarily available at the lower end of the price tiers, accounted for a whopping 28.1 percent of the market.

Analysts expect the wearables market to grow exponentially over the next few years, with shipments doubling by 2024. Canalys says medical-oriented devices will carve out a market of their own in 2021. The firm believes that there will be a clear separation between casual fitness trackers and advanced health tracking devices in the coming times. 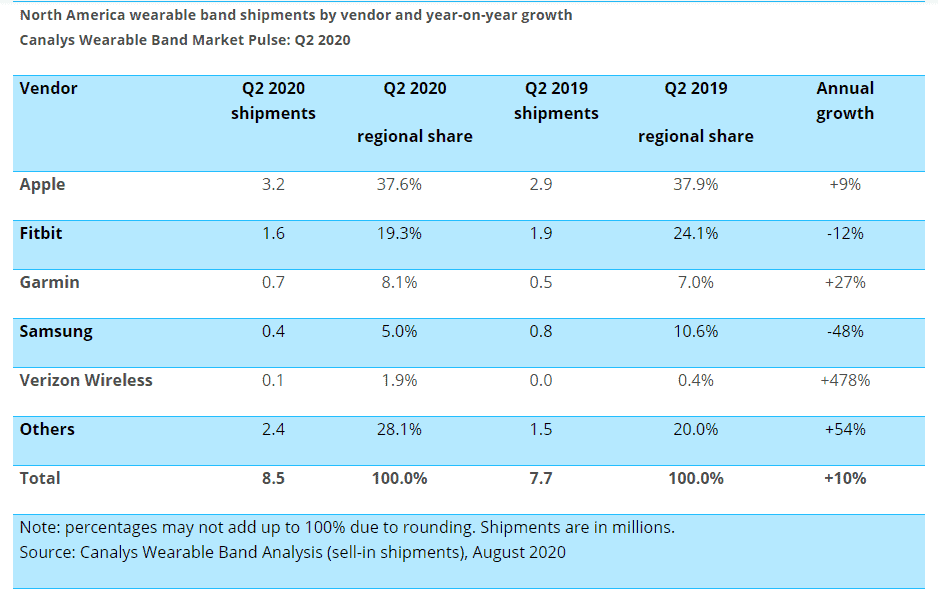