HMD Global has first confirmed the Android 11 update timeline for Nokia phones, and then retracted it. Nokia Mobile shared the information via Twitter, and then the tweet was deleted for some reason.

We’re not really sure what’s going on, but there you have it. Perhaps someone jumped the gun and published the tweet ahead of time, or HMD Global plans some additional changes.

In any case, in that tweet, Nokia Mobile said that it made 1,000 updates in the last three years. The company said it did that as part of its 3-year promise that it made.

Along with that, the company shared an image, detailing the Android 11 update timeline. In that image, the company detailed which phones are slated to get Android 11 both this and next year. 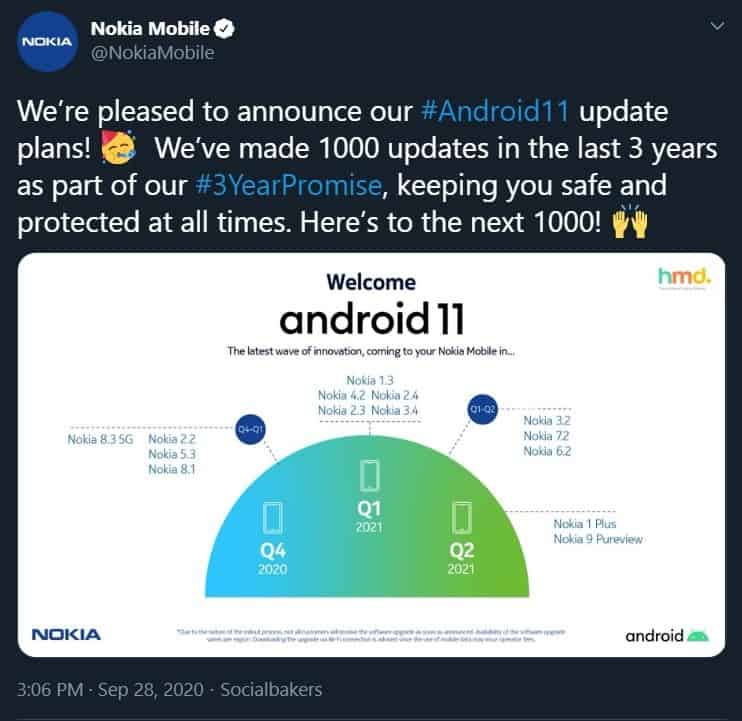 Those phones are the Nokia 2.2, 5.3, 8.1, and 8.3 5G. Interestingly enough, the Nokia 8.3 5G is not even official yet, even though it did leak the other day. That’s possibly one of the reasons, if not the main one, HMD Global decided to pull this announcement.

Do note that HMD Global left some room for error, as it did list “Q4-Q1” on the side for these devices, just in case the update ends up running late.

As far as the second quarter of 2021 is concerned, two phones are listed, the Nokia 1 and Nokia 9 PureView. The Nokia 9 PureView is the last true flagship smartphone that the company announced.

That device managed to disappoint in some ways, like in the camera department, but its successor is expected to arrive soon. According to the latest information, its launch is not far off.

There you have it, the company is planning to update quite a few phones in the next couple of quarters. Interestingly enough, the Nokia 8.3 5G is listed here, while the Nokia 9.3 PureView is not, and both are rumored to arrive soon.